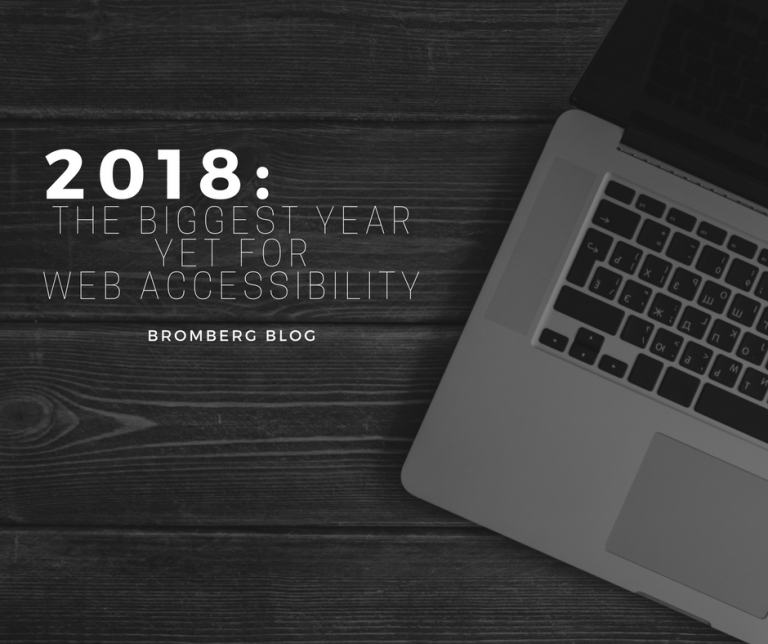 2018: The Biggest Year Yet for Web Accessibility

A new year can often bring change, whether positive, negative, or both. As 2018 unfolds, there will be myriad developments in the law, with new statutes, regulations, and court decisions revealing perhaps new directions and landmark turns in U.S. history.

One area where change is not expected is web accessibility for people with disabilities. The trend line for legal challenges about inaccessible websites and federal Americans with Disabilities Act disability discrimination continues its upward climb, perhaps even more steeply than we witnessed in 2017.

As 2017 ended, several developments confirmed that web accessibility for people with disabilities continues to be a hot topic and a major focus of lawsuits.

For example, there may well have been more than 800 web accessibility lawsuits filed in federal courts across the United States last year. All indications are that in 2018, federal court cases may near or exceed 1,000.

In 2017, many different organizations and businesses found themselves the target of website accessibility litigation, such as hospitals, clinics, major retailers, restaurants, supermarket chains. I expect that these organizations will continue to be targeted in 2018, while new web accessibility defendants will also be revealed.

At the end of 2017, various media accounts confirmed two new targets of opportunity – credit unions and universities. Indeed, so many lawsuits were filed against credit unions in December 2017 that the CU Times described that fateful month as a “December to Remember.”

According to the CU Times:

“More than 30 new ADA [Americans with Disabilities Act] suits were filed against credit unions last month over the accessibility of their websites, likely making it a ‘December to remember’ for many in the credit union industry.

The surge brings the total number of suits filed to more than 60 so far. Credit unions in nine states have been served, according to court records.

Sources tell CU Times that demand letters, which typically precede the suits, have landed on the doorsteps of even more credit unions.

Pacific Northwest Ironworkers Federal Credit Union is one of them, according to CEO Teri Robinson. Based in Portland, Ore., the credit union, which has $26 million in assets and about 5,100 members, received a demand letter in November, she said.

At least five credit unions in Michigan have been sued over alleged ADA website violations this month.

‘I actually got a call from another credit union first,’ Robinson said. That  credit union had already received a demand letter, she recalled. ‘I was kind of trying to talk them off the ledge about it, but he and I were both thinking it wasn’t a big deal because we’re both closed fields of membership…then a week later, I got mine,’ she said.”

In recent years, several universities and colleges have also been hit with web accessibility lawsuits, disability discrimination allegations, and federal enforcement actions, such as Harvard, MIT, Youngstown State University, University of Maryland, and the University of California/Berkeley.

However, at the end of 2017, according to the New York Times, the number of institutions of higher learning socked with complaints that their websites are legally inaccessible to people with disabilities is growing, and growing quickly.

According to the NYT:

“The lawsuits came one after the other, against Fordham University, Manhattan College, Long Island University and other area colleges and universities.

In all, eight suits have been filed in federal court in Manhattan over the past two weeks, most recently against Hofstra University on Long Island on Oct. 4. In each case, lawyers for Emanuel Delacruz, who is blind, charged that the college’s website is inaccessible to their plaintiff and therefore in violation of the Americans With Disabilities Act.

The filings are part of a growing number of actions involving accessibility and the internet. The federal law requires that public accommodations be accessible to those with disabilities, and legal battles have long revolved around physical spaces and therefore physical solutions, such as elevators or wheelchair ramps. Now, advocates and lawyers argue, websites are also public spaces and need to be accessible, with things like captions or audio descriptions.”

As 2018 moves forward, the legal focus may well turn towards states and their laws. For example, late in 2017, California Governor Jerry Brown signed a new state law requiring all California state government agencies and departments to have legally accessible websites for people with disabilities and post on their home pages a certification of accessibility.

With the U.S. Department of Justice’s 2017 decision to pull back from producing website accessibility regulations, the focus in 2018 could be actions at the state and local level to ensure that government websites are open and usable by all people, regardless of disability.

Web accessibility compliance is clearly a reality. Making websites legally usable and accessible to people who are deaf, blind, and low vision, for example, is unequivocally a matter of when do we change our website rather than do we really have to do this? In 2018, as it has been for the last few years, the answer to the question, Do we have to do this, is absolutely YES!

**Read some of Bruce Adelson’s other blog posts  to learn about more developments in language access law, and be sure to contact us if you’re interested in a consultation about your own organization’s compliance with federal language access law.