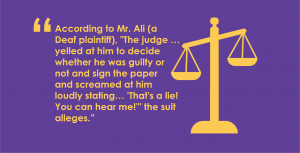 ADA Discrimination: The Law is What the Courts Say

“It is emphatically the province and duty of the [Courts] to say what the law is.”

This simple statement was penned by Chief Justice John Marshall in the landmark 1803 U.S. Supreme Court case of Marbury v. Madison. This decision established a core principle of American democracy: It is the job of the Courts, not the President and not the Congress, to decide what the law says. Marshall’s precedent-establishing words left it up to Judges and Courts to tell us what the LAW really says and really means.

The United States of today is much different than the United States of 1803 in myriad ways. Today, the sources of U.S. law are much more numerous than in the early 19th century. After Congress passes bills that become laws, federal agencies then step in. These agencies issue regulations, guidance, advisories, enforcement agreements, and opinions, all of which have a legal effect and impact and did not exist in 1803. All such federal agency action is public notice of various federal legal requirements and standards, according to the U.S. Justice Department.

But the final deciders about the law are the Courts.

I am often asked what the law says about various topics with the rhetorical question, “Where does it say that?” Well, the answer is with the Courts and their written decisions. Courts can change what the law requires. Courts also clarify legal issues that may be uncertain.

Today, federal courts are seeing many lawsuits filed by Deaf and hard of hearing people that allege disability discrimination in violation of the Americans with Disabilities Act (ADA).

These cases claim that state courts, hospitals, and other organizations discriminate against people with disabilities. The federal courts then decide just what Chief Justice Marshall described more than 200 years ago – They determine “what the law is.”

Well, it’s in the Courts and their decisions.

Wondering what the ADA says you have to do? Many recent cases explain what the law is. Without following the Courts, you will just never know what the law really says.

Dustin King, who is Deaf and communicates by sign language, sued the Marion County, Indiana courts in 2014, claiming that he was entitled to an American Sign Language interpreter when he participated in Marion County’s modest means assistance program where parents mediate their family law disputes. The Marion County Court declined his request for an ASL interpreter. A federal judge decided this was disability discrimination because the failure to provide an interpreter excluded King from the mediation program solely because of his deafness.

Update: Marion County appealed this decision to the U.S. Court of Appeals for the Seventh Circuit, which heard oral arguments in this case in April 2017. The appeals court decision will have a major impact in explaining what the law is for accommodating people with disabilities so they can participate in group programs.

Ali v. City of Newark and the State of New Jersey

Chinedu Ali, who is Deaf and communicates by sign language, sued The Newark (NJ) Municipal Court, the City of Newark, and State of New Jersey in federal court after he was not provided with an American Sign Language interpreter during two traffic ticket hearings.

Mr. Ali claimed that the court officer wrote down the words “guilty” and “not guilty” on a sheet of paper, “evidently requiring him to point to one or the other.” Mr. Ali communicated that he did not believe it was fair for him to select a guilty or not guilty plea without a hearing where he could understand the charges against him.  According to Mr. Ali, “The judge … yelled at him to decide whether he was guilty or not and sign the paper and screamed at him loudly stating… ‘That’s a lie! You can hear me!'” the suit alleges. “The plaintiff pointed to his hearing aid so that the judge would understand that he is Deaf and stated: ‘I am not lying, I am Deaf.’”

Update: This case is proceeding to a trial. Mr. Ali is trying to have all Newark Municipal Court judges testify under oath about the ADA and effective communication with Deaf people. The City of Newark is fighting Mr. Ali’s attempt. Unless both sides can work this out, the federal judge will decide what the law says about Mr. Ali’s effort to have the Newark municipal judges testify and will decide what the law says about communicating with Deaf people in court cases.

So, be careful where you get your information about legal requirements. Take the advice of Chief Justice John Marshall. There is only one place to go to know what the law truly says:

“It is emphatically the province and duty of the [Courts] to say what the law is.”