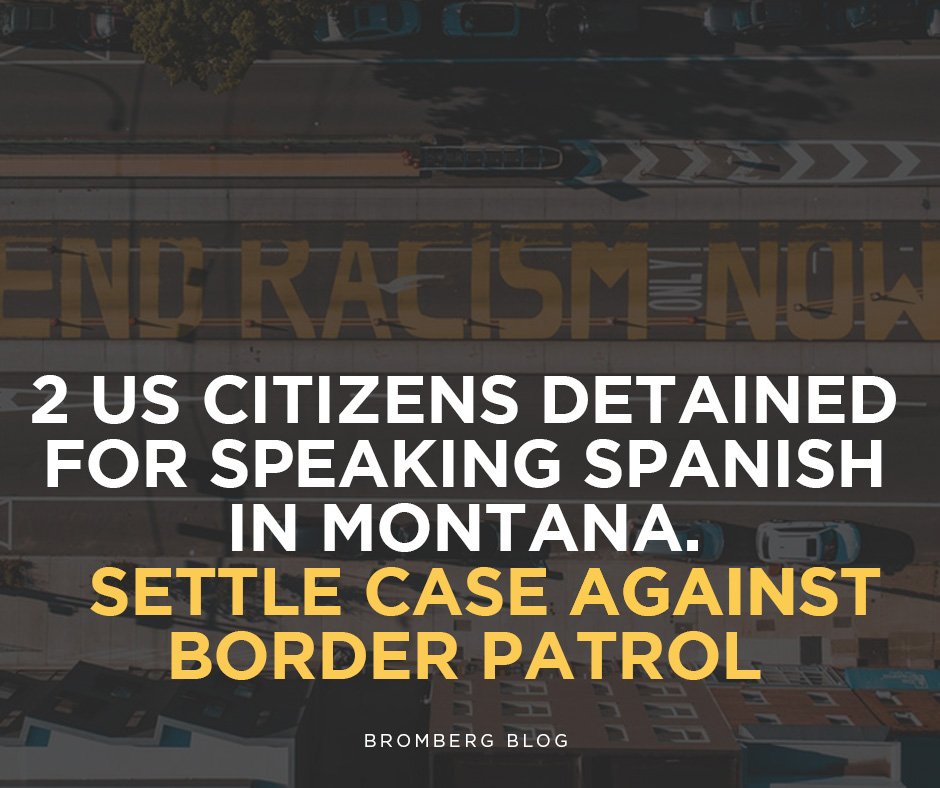 Last year, I wrote a blog about two U.S. citizens, Ana Suda and Martha Hernandez, who were detained by the US Border Patrol in a small Montana town because  they were speaking Spanish. After their detention, the women sued, claiming that their rights had been violated. Now, nearly two years after their detention, they have settled their lawsuit against the U.S. government.

“The women, Ana Suda and Martha Hernandez, were stopped last spring near the US/Canada border by a CBP [Customs & Border Patrol] agent who asked for their identification because he heard them speaking Spanish”.

The border agent, identified in the lawsuit as Paul A. O’Neal, stopped the two Americans inside a convenience store in the small border town of Havre, Montana. The agent detained them in the store’s parking lot for about 40 minutes, according to the federal complaint.

The lawsuit alleges that O’Neal commented on Ms. Hernandez’s accent, calling it “very strong,” and then asked where they were born. Ms. Hernandez was born in California and Ms. Suda in Texas, according to the complaint filed in U.S. District Court for the District of Montana. The women are represented by the ACLU…

CBP Agent O’Neal further commented that he stopped, questioned, and detained Ms. Suda and Ms. Hernandez “…because he heard them speaking Spanish. He offered no other justification for their detention and there was no reason to believe that [they] had violated any law,” according to the complaint. Their lawsuit also claims that O’Neal’s supervisor “… confirmed that French-speakers would not be similarly detained,” suggesting that CBP relied on plaintiffs’ “use of Spanish as [an unconstitutional] justification and proxy for race [discrimination].”

Now, USA Today reports that the federal lawsuit has been resolved.

According to USA Today:

“The monetary settlement was announced on Tuesday [November 24] by the American Civil Liberties Union, which filed the lawsuit on behalf of Ana Suda and Martha “Mimi” Hernandez, alleging their constitutional rights were violated.

The amount of the settlement was not disclosed at the request of the two women, said Cody Wofsy, a staff attorney with the ACLU Immigrants’ Rights Project in San Francisco.

The case shows that the attitudes of some agents in the Border Patrol are “completely out of step” with the growing number of Spanish speakers in all parts of the United States, Wofsy said.

To have this idea that because our clients were speaking Spanish, that told the agent anything at all about who they were, where they were from, what their immigration status was, just speaks to a complete misunderstanding of the diversity and demographics of our country,” Wofsy said.”

WHAT HAPPENED IN HAVRE MONTANA?

In 2018, Ms. Hernandez and Ms. Suda were buying groceries in the small Montana town of Havre, MT, with a population of 9,000 people and a CBP field office for agents who patrol Montana’s 450 miles of the U.S./Canadian border. Suda and Hernandez were both born in the United States, Texas and California respectively. They grew up in the United States speaking Spanish.

As I wrote in 2019: “[O’Neal] briefly detained them in the store’s parking lot, the suit contends. The women then began to film the encounter on their phones, and asked the agent on video why they were being stopped.

“Ma’am the reason I asked you for your ID is I came in here and I saw you guys are speaking Spanish, which is very unheard of up here,” the agent said, looking into the camera. One of the women then asked if they had been stopped because of their “racial profiles.”

No, it has nothing to do with that,” he replied, according to the video. “It’s the fact that it has to do with you guys speaking Spanish in the store in a state where it is predominantly English speaking, O.K.?”

However, information uncovered during the lawsuit belies O’Neal’s comment that discrimination and racial animus played no role in the women’s detention.

Text communications and social media postings proved that as Suda and Hernandez claimed, they were the targets of invidious discrimination, based on race, national origin, language as well as gender. All such discrimination is prohibited by the U.S. Constitution and the Civil Rights Act of 1964.

“[A CBP text states] Busy working to the max.. thank God for Trump the national constipation has been relieved were (sic) back to doing some good numbers.. The text contains a derogatory slur for people of Mexican descent.

According to the ACLU, the lawsuit also revealed that O’Neal belonged to a now-defunct secret Facebook group called the “I’m 10-15,” where Border Patrol agents and former agents exchanged derogatory comments and jokes about the deaths of migrants and Latino members of Congress visiting a detention facility in Texas.

In gathering information for the lawsuit, the ACLU said CBP agents in northern Montana acknowledged they profiled non-white people. The ACLU obtained a video statement of a CBP supervisor admitting that Border Patrol agents routinely treated people speaking Spanish with suspicion in Havre, which is predominantly white but has a growing Latino population.

“I didn’t see anything harassing about it,” the CBP supervisor says, referring to the Border Patrol agent’s actions at the convenience store. “Even on the video, it was like — what are you complaining about? You are from El Paso. You do this every day.”

“[Havre] is a small place,” the CBP supervisor continues. “And we have a lot of agents here, and nobody really has much to do… I was sitting at the mall off duty with my family. I’m sitting there at the restaurant, I look up it’s — there’s two Mexicans. Maybe I should call about this. I I start reaching for my phone and about 20 feet behind them was another agent, right behind them on the phone. If there is somebody speaking Spanish down here, it’s like all of a sudden you’ve got five agents swarming in like ‘What’s going on?’ So Havre is kind of like that.”

With their detention and lawsuit now behind them, Suda and Hernandez have also put Havre behind them as well. They faced community scorn and criticism for speaking out against the CBP. While their case was pending in court, the two women moved away from town fearing for their safety and the safety of their families, according to USA Today.