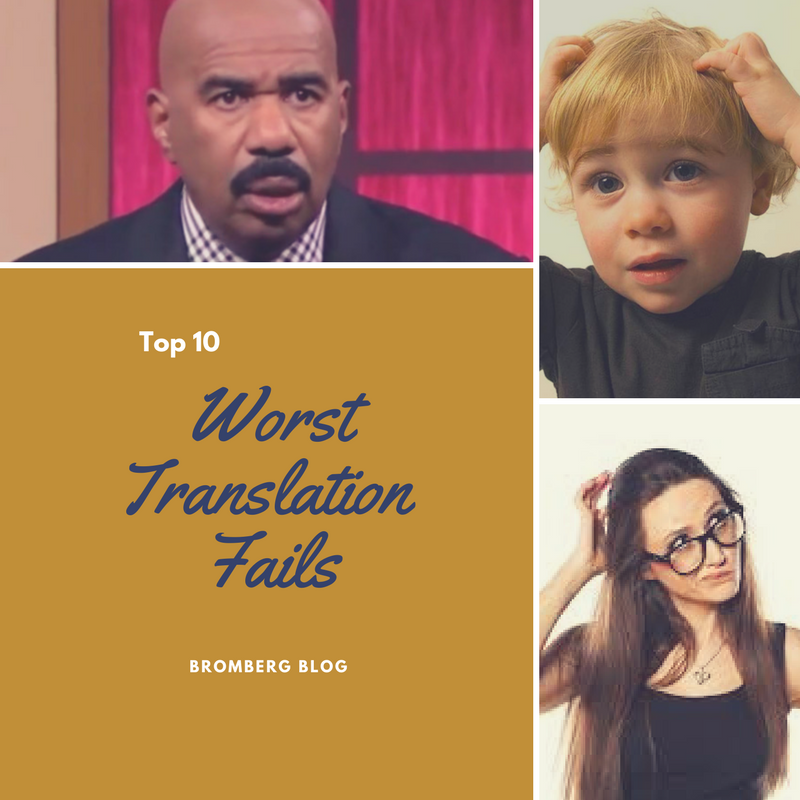 1.Toilet water is NOT refreshing!

The beverage company Schweppes once introduced its brand of tonic water into the Italian market which translated to “Schweppes Toilet Water.” Ahhhh… refreshing.

Parker Pen Company ran a successful ad campaign by promising customers that the Parker pens “won’t leak in your pocket and embarrass you.” When they entered the Spanish-speaking Mexican market, the catchphrase was inaccurately translated into “no goteará en tu bolsillo ni te embarazará.” The people of Mexico were consequently reassured that a Parker pen would never get them pregnant…

A message using slang words may get lost in translation as Coors once discovered. When they tried to expand its hip and trendy “Turn It Loose” campaign to Spain, they did not ensure the translation would hold the same meaning. When translated into Spanish, the tagline used an expression that’s commonly interpreted as “Suffer from diarrhea.”

I’m sure James Brown was not impressed.

The famous “Got Milk?” campaign was immensely successful among English-speakers in the U.S. However the Hispanic market was confused why the American Dairy Association would ask such a personal question. Their slogan was translated literally to “Are you lactating?

Welp… no I’m not, thanks for asking.

So does that 7 year/100,000 mile warranty cover the high quality corpse as well?

HSBC once had to spend $10 million on a rebranding campaign to repair the damage for its U.S. campaign “Assume Nothing.” That’s because once it was translated into overseas markets and languages, the tagline became “Do Nothing.” Unsurprisingly, the campaign was later scrapped due to lack of effectiveness.

Mead Johnson Nutritionals, a manufacturer of infant formula recalled 4.6 million cans of Nutramigen Baby Formula due to misleading Spanish directions on bilingual labels. Because the preparation instructions were translated incorrectly, the dosages would have been too high for a newborn. This would have resulted in seizures, irregular heartbeat, or death of an infant. Although the problem was caught before any accidents occurred, the cost of recalling and re-labeling the cans was astronomical.

Pepsi once launched a promotional campaign with the tagline “Come alive with Pepsi.” Once they expanded the campaign to China, the slogan was improperly translated as “Pepsi brings your ancestors back from the dead.”

U.S. Secretary of State Hillary Clinton in an effort to reset relations with Russia presented Russian Foreign Minister Sergei Lavrov with a red button with the English word “reset” and the Roman alphabet transliteration of the Russian Cyrillic alphabet word перегрузка. But thanks to a translation mistake, Lavrov had to explain that the button actually said overload. Needless to say, it was an extremely awkward moment.

Props to the interpreter for saving the day for former president Jimmy Carter!

While speaking at a small Methodist college in Japan shortly after leaving the White House in 1981, Carter began with a joke. The interpreter delivered it in Japanese, and the audience erupted in laughter. Impressed with the interpreter’s skill, he asked how the interpreter managed to get such a laugh. Eventually, the interpreter admitted he said, “President Carter told a funny story. Everyone must laugh.”

So there you have it, the top 10…err… 11 worst translation fails. At Bromberg, our highly qualified team of translators and interpreters will help you avoid the embarrassment of bad translation. Be sure to contact us for any language services or for a quote on your next translation project.