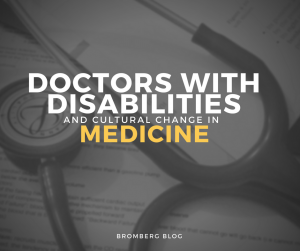 Doctors with Disabilities and Cultural Change in Medicine

But what about providers – doctors and nurses – with disabilities?

Some people may express incredulity at the thought.

Wait – Don’t doctors have to be available in all situations? How can a doctor in a wheelchair perform surgery? What about nurses who are deaf not perceiving a patient emergency?

A recent story by National Public Radio’s WBUR highlighted an effort to change health care culture to adapt to the reality of providers with disabilities.

“Lisa Iezzoni was in medical school at Harvard in the early 1980s when she was diagnosed with multiple sclerosis. She started experiencing some of the symptoms, including fatigue, but she wasn’t letting that get in the way of her goal. Then came the moment she scrubbed in on a surgery and the surgeon told her what he thought of her chances in the field.

‘He opined that I had no right to go into medicine because I lacked the most important quality in medicine,’ Iezzoni recalls “And that was 24/7 availability.  Iezzoni graduated from medical school but didn’t end up becoming a practicing doctor. This was before the Americans with Disabilities Act passed in 1990, and she says she just didn’t have the support.

In the decades since, court rulings and amendments have clarified rights and protections. But culture change has been slow to take hold in the profession.

Doctors are often portrayed as pinnacles of health, superhumans responding to emergencies around the clock, performing miracles of all kinds. They’re seen as the fixers, not the ones ever in need of accommodations or care.

‘This profession historically has viewed themselves as able-bodied in the extreme,’ Iezzoni says.

Now, a growing movement of current and aspiring doctors with disabilities is starting to challenge that narrative, saying it is a disservice both to the medical profession and to patients.”

This narrative challenge involves changing long held beliefs among providers about the roles and responsibilities of doctors and nurses, a narrative that comes with certain incorrect and misplaced assumptions. Indeed, cultural competence in health care concerns more than providers’ attitudes about their patients. This health care cultural competency also concerns their attitudes and biases about the colleagues see and work with every day.

“Disability Does Not Mean Inability”

Doctors are more than the hype. They have various and varying responsibilities, all of which do not have to involve physical activities that may be more difficult for a provider with a disability, according to Dr. Feranmi Okanlami, a family medicine practitioner at the University of Michigan. “Disability does not mean inability,” he opined.

“Feranmi Okanlami was in his third year of medical residency at Yale’s New Haven Hospital in 2013 when he had an accident jumping into a swimming pool. He injured his spinal cord and became partially paralyzed.

‘I think that once people see how many people are already out there practicing with disabilities, I think that will normalize this more,’ says Okanlami. ‘Disability does not mean inability.’ He says he might not be the guy on the ground doing chest compressions during a code, when someone has stopped breathing. But a doctor is more than that.

‘You have to be the person deciding what medication to give; you have to make sure that the people doing chest compressions are doing them adequately; you have to think about what could be the reason the person stopped breathing or their heart stopped,’  Okanlami says. ‘The tasks required to run a code aren’t all just physical tasks.’

… Earlier this year he was invited to do grand rounds back at Yale, training residents at the very place he started his career before his accident.”

Meeks co-founded the Coalition for Disability Access in Health Science and Medical Education, a group focused on improving access to medical education for students with disabilities. She also co-authored a report released this year on disabilities and medicine, which found that many doctors still conceal their disabilities out of fear of stigma or bias.

Earlier this year, Meeks had a thought: If doctors with disabilities saw more people like themselves, would they talk more openly about the challenges and opportunities? She started a social media campaign with the hashtag #DocsWithDisabilities.

The goal was to find twenty doctors willing to share their stories online. She has since been flooded with interest from doctors with disabilities.

Doctors and nurses with disabilities are also well equipped through their own life experiences to relate to being treated differently because of who they are. This essential part of cultural competence and awareness may well enable providers with disabilities to assist their profession in becoming more tolerant and understanding of the differences seen every day in the myriad patients seeking medical care.

“‘… I think that part of the origins of disparities are stigmatizing attitudes,’ says Iezzoni, the former medical student with MS.

After her poor experience in medical school, Iezzoni went on to become a leading health policy researcher, directing the Mongan Institute Health Policy Center at Massachusetts General Hospital, where one focus is on disparities in health care for people with disabilities.

She and other researchers have found that patients with disabilities are less likely to receive recommended treatments and screenings, like Pap tests. One reason may be that doctors carry their own assumptions or don’t always understand the nuances and realities of living with a disability.

For Iezzoni and this new wave of doctors, the most ‘able’ physician of the 21st century is the one who can relate to all patients, whatever they’re facing, and has the skills and creativity to give them the best care.”

**Read some of Bruce Adelson’s other blog posts to learn about more developments in language access law, and be sure to contact us if you’re interested in a consultation about your own organization’s compliance with federal language access law. Also, check out the blog “Communication Equals Understanding: The Effects of Increased Language Access for Patients” for more information about this subject.