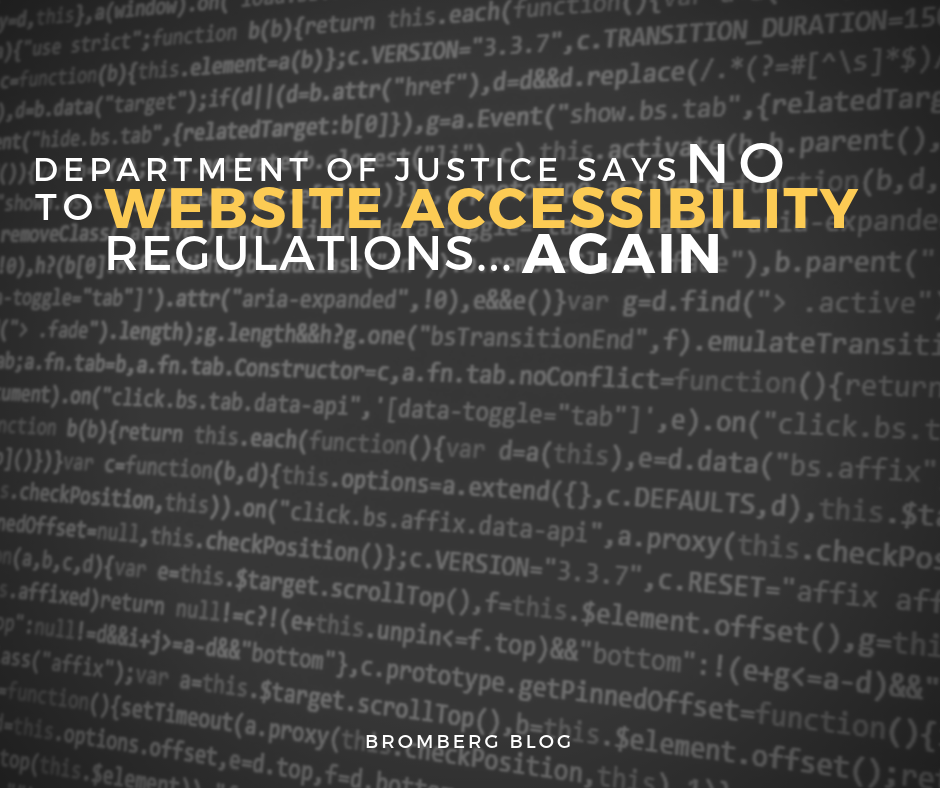 Department of Justice Says No to Website Accessibility Regulations… Again

Faced with letters from more than 100 Congressmen and various businesses requesting U.S. Department of Justice (DOJ) assistance with the growing number of website accessibility lawsuits, DOJ again declined to take any immediate action.

According to The Credit Union Times:

“The Justice Department under President Obama had announced its intention to issue ADA guidance governing websites.

But the Trump Administration put the guidance on an inactive list and did not take it off in the Spring update of its regulatory agenda. The administration has placed a high priority on rolling back regulations.

More than 100 members of Congress and 19 state attorneys general have asked the Justice Department to issue ADA guidance for websites.

So far, the administration has resisted pressure to issue the guidance.”

In a September 25 letter to Representative Ted Budd, Assistant Attorney General Boyd reminded Budd that DOJ backed away from Americas with Disabilities Act (ADA) website accessibility regulations in 2017. At that time, Boyd explained, DOJ stated that it was “evaluating whether promulgating specific web accessibility standards through regulations is necessary and appropriate to ensure compliance with the ADA.”

DOJ is continuing its review of the Department’s entire “regulatory landscape and associated agenda,” Boyd wrote. Effectively, DOJ’s September 25, 2018 letter reiterated what the Justice Department stated in December 2016 – don’t expect any regulations or guidance from DOJ anytime soon about website accessibility requirements and compliance under the ADA. Federal agency reviews of its entire “regulatory landscape and associated agenda” are painstakingly time consuming, especially one by the Department of Justice, the ultimate law enforcement agency of the United States with lots or regulations under its vast jurisdiction and “landscape.”

The September 25 letter reminded readers that DOJ first officially announced its opinion that the ADA covered websites and their accessibility to people with disabilities over 20 years ago.

The Web Content Accessibility Guidelines (WCAG) are such voluntary standards. The WCAG guidelines are widely acknowledged to be a good benchmark for measuring website accessibility. They are published by the World Wide Web Consortium (W3C), Web Accessibility Initiative (WAI).

However, as DOJ has frequently stated, the WCAG are NOT laws, they are voluntary recommendations. Complying with WCAG does not mean your website is legally ok under the ADA, the Rehabilitation Act, the Affordable Care Act, for example, and other laws.

Indeed, as the National Association of Federally-Insured Credit Unions stated in an issue brief for members:

“A regulatory void exists due to ambiguities in the law regarding website accessibility requirements… Title III of the ADA stipulates that places of “public accommodation” such as credit unions, banks and other “service establishments” are generally prohibited from discriminating on the basis of a disability in the activities of that place of public accommodation. The Department of Justice’s (DOJ) regulations addressing “auxiliary aids and services” necessary to meet effective communication objectives for individuals with disabilities do not specifically address website accessibility.

Both the ADA and DOJ’s regulations are silent on required standards for website accessibility. The DOJ has not provided specific technical requirements through a formal rulemaking process. The ADA was enacted in 1990, and reforms have not evolved on pace with technological advances. The DOJ began gathering information on setting website accessibility standards, but has not adopted any technical requirements. This issue was removed from the DOJ’s rulemaking agenda, and two advanced notices of proposed rulemaking on the issue were withdrawn as the DOJ wanted to evaluate whether regulations were necessary and appropriate.”

Case in point – Credit unions and banks have been especially targeted for ADA website discrimination lawsuits. According to The Credit Union Times,

In addition to U.S. Representative Budd’s letter to DOJ, Congress has taken other steps to get the Justice Department’s attention about website accessibility regulations.

As The Credit Union Times reported:

“The House Appropriations Committee, in its report for the Commerce-Justice-Science funding bill, states, that the panel “expects the Department to clarify standards for website accessibility requirements pursuant to the Americans with Disabilities Act in fiscal year 2019.

The Committee recognizes the confusion caused by a lack of uniform website accessibility standards. The lack of clear requirements disadvantages small businesses that provide essential services for our communities.

The House, in its version of the FY19 appropriations bill for the Justice Department included instructions directing the department to issue ADA guidance. The Senate version of the same bill does not include that provision.”

The ADA website accessibility explosion continues, with no end in sight. By approximately mid-2018, more than 1,000 federal lawsuits claiming website ADA discrimination had been filed in federal courts across the United States. This total marks a significant increase over lawsuits filed in 2017, then a record year for website accessibility litigation. Conceivably, the 2018 website ADA discrimination cases could exceed 2,000 by the end of 2018.

As the lawsuits mount up, we should expect a similar increase in lobbying efforts of DOJ, efforts to convince or persuade the Justice Department to get back in the arena and issue regulations that provide the legal rules and requirements for making websites accessible to people with disabilities.