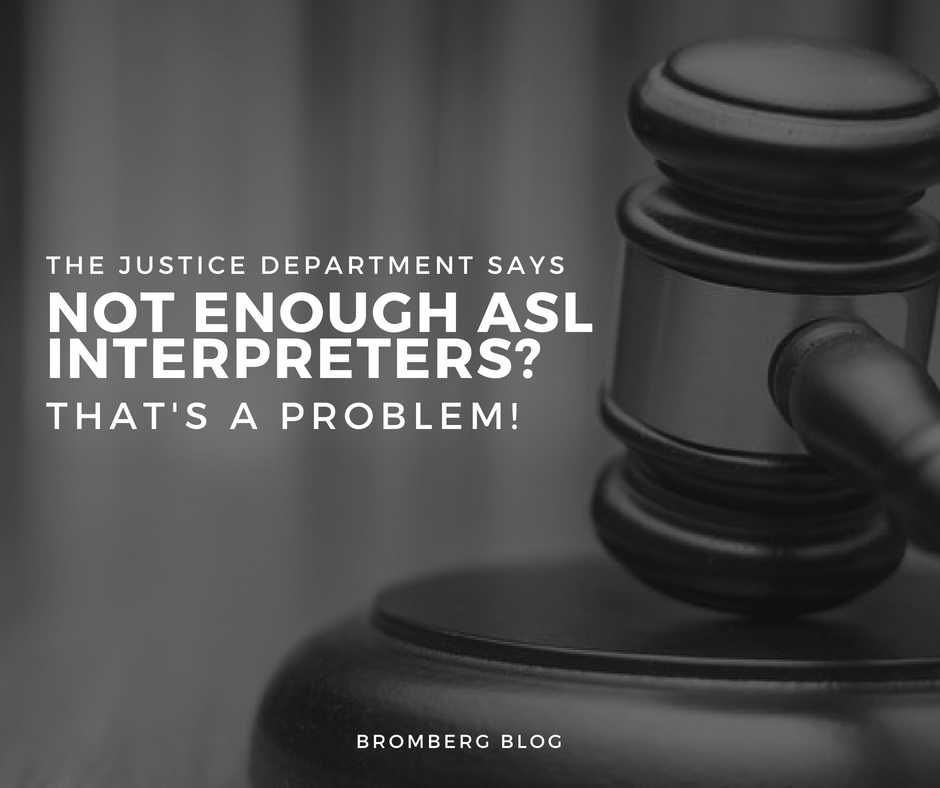 On June 11, 2018, the U.S. Justice Department (DOJ) announced an Americans with Disabilities Act (ADA) settlement with the Washington Health Care Authority (HCA).  HCA has been assisting health care providers in Washington by providing them with sign language interpreters for Medicaid appointments at state expense. In Washington, these appointments come under the State’s Apple Health Plan.

According to DOJ, the settlement requires HCA to increase the number of sign language interpreters available “to attend Apple Health Plan (Medicaid) medical appointments and interpret for patients who are hearing impaired and/or their companions.”  Under the terms of the settlement, the number of interpreters under contract statewide will be increased from fewer than ten to more than 100.

This case was investigated and pursued by the U.S. Attorney for the Western District of Washington. In announcing the settlement, U.S. Attorney Annette L. Hayes said, “The ability of people with hearing disabilities to fully understand and thus participate in their medical care is a fundamental right protected by federal law,” said.  “Healthcare providers, and state agencies involved in healthcare, must ensure that their services are provided in a manner that does not exclude people with disabilities.”

To remedy the ADA discrimination problem of not having interpreters for Apple Health appointments, the settlement requires that:

The settlement also calls for immediate relief for the interpreter shortfalls by requiring HCA to permit healthcare providers to immediately obtain their own ASL interpreter for healthcare appointments outside of the HCA system and receive reimbursement by HCA for those services. The settlement also calls for HCA to use the Apple Health website and other communications tools to inform patients of their rights to interpreter services along with a grievance procedure if they believe their rights have been violated.”

HCA’s position as the state agency sign language interpreter provider for Medicaid appointments is unusual. Although HCA partnered with an interpreter agency, HCA was the go to organization for doctors and clinics with deaf or hard of hearing patients. HCA took on a large responsibility, which ultimately led to problems and federal enforcement when HCA’s partner, CTS, effectively could not do what it had agreed – provide sign language interpreters as requested.

AS DOJ found in its investigation:

“The United States determined that HCA’s Interpreter Services Program holds itself out as a service by which health care providers may obtain sign language interpreters for Apple Health appointments in which a patient or companion requires such assistance for effective communication. The United States further determined that HCA’s Interpreter Services Program has been administered since 2012 through a contract with an interpreter services agency historically called CTS LanguageLink.  Since 2012, CTS LanguageLink has had as few as zero and as many as approximately ten sign language interpreters signed up to offer sign language services for all Apple Health appointments statewide.

In many counties, CTS LanguageLink has zero sign language interpreters available. As a result of this shortage, the fulfillment rate (the number of times the HCA Interpreter Services Program has been able to provide a sign language interpreter for each time one is requested under this system) has been at or below 30% since 2012. The low fulfilment rate has, in turn, lead to cancellation or rescheduling of health care appointments and/or the use of alternative and presumptively less effective means of communication during healthcare appointments with individuals who are deaf or hard of hearing or their companions.”

On the basis of this investigation, the United States has concluded that HCA’s current administration of the Interpreter Services Program violates Title II of the ADA because it fails to ensure that the benefits of the Apple Health program are provided equally to qualified individuals with disabilities. Further, the administration of the Interpreter Service Program is such that qualified individuals with disabilities are not afforded an equal opportunity to obtain the same results and benefits under the Apple Health program as others.”

“Qualified interpreters include, for example, sign language interpreters, oral transliterators, tactile interpreters, and cued-language transliterators.  Whether or not a particular interpreter is qualified will depend upon the form of communication that the patient or companion at issue typically uses. For purposes of this Agreement, a Qualified Interpreter must be knowledgeable with medical terminology.”

The agreement further requires HCA’s new interpreter agency partner to be up to speed about ADA requirements and to provide legally compliant ADA grievance and complaint procedures.

According to the settlement agreement:

“Interpreter Services Competency. HCA’s ISP must have an employee on staff who is either already trained on ADA regulations regarding effective communication with persons who are deaf or hard of hearing or who receives such training within sixty (60) days of the start of the ISP contract (“ADA Trained Employee”). HCA’s ISP’s ADA Trained Employee’s job responsibilities must include working with HCA’s ADA Coordinator to address complaints regarding the provision of sign language interpreters received through the grievance procedure referenced in Paragraph 26 below.

Interpreter Services Fulfillment. By April 2019, HCA’s ISP System must deliver a fulfillment rate for Qualified Interpreters provided for Apple Health appointments in which a Patient or Companion requests a Qualified Interpreter of more than 90% in each Geographic Region in Washington  State. Fulfillment rate shall be measured by the average of each month for each six-month period within the duration of this Agreement, beginning with the period from September 2018 to March 2019.”

One of the many lessons to be learned here is be careful with whom you partner. If you agree to provide sign language interpreter services, either directly or indirectly through an organizational partner, be certain you can do what you agree. If not, you may have DOJ looking over your shoulder for the foreseeable future while you become well acquainted with your local U.S. Attorney, as will HCA: “During the term of this Agreement…..HCA will report in the first week of every business quarter (or, if DOJ approves, in the first week of every other business quarter), and once thirty (30) days prior to end of the term of the Agreement, to the U.S. Attorney’s Office as to its compliance with this Agreement.”