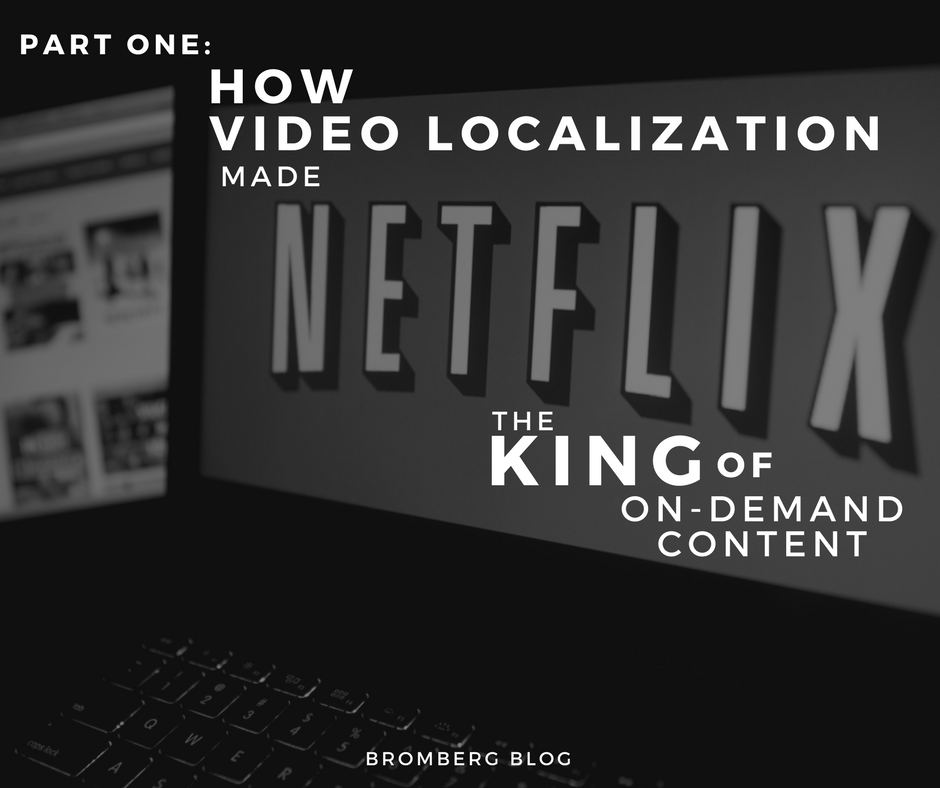 Lately, Netflix has been internet-famous for its production of season two of “Stranger Things” and for coining the term “binge racer,” a person who indulges in an entire TV series just 24 hours after its release. But it isn’t Netflix’s celebrity that has helped crown it King of the on-demand streaming industry; it’s Netflix’s impressive approach to video localization.

The History of Streaming

Less than 25 years ago, dial-up internet access operated so sluggishly that a low-quality 700 MB movie would take 28 hours at full-speed (or even 3-to-5 days at low speed) to play. Today, consumers would scoff if they had to wait even tenth of that time to watch an episode of “Master of None” on Netflix. With the fade-out of dial-up internet, traditional cable TV, newspaper, and radio, quick connections available on devices like the iPad or smartphone made streaming content as intuitive as brushing your teeth.

While computers are close behind, mobile devices have surpassed other technologies as the no. 1 tool for media consumption. In fact, the number of smartphone users is projected to hit 4.6 billion by 2019, according to Deloitte. This means that more users will enjoy lightning-fast access to video streaming companies such as Hulu, Amazon Video, and, of course the king of streaming — Netflix.

Just this year, both Netflix’s subscriber rates and revenue beat original expectations, and it’s expected their numbers will continue to rise throughout the year. And people are noticing. In fact, “Shares of Netflix are trading for 92.7 times the consensus 2018 earnings-per-share estimate,” according to Market Watch.

But what about competitors? While intuitively other companies that offer similar services, such as Amazon, should be in competition with one another, both media moguls continue to grow side-by-side and are being viewed as complementary services rather than competing ones.

One thing that really sets Netflix apart from the rest is its highly successful “Netflix Originals” category that streams innovative Netflix-distributed programs such as, ‘Narcos,’ ‘BoJack Horseman,’ and ‘Gilmore Girls: A Year in the Life.’ But, undoubtedly, Netflix could not have reached this apex without having responded to the desires from viewers around the world for top-notch video localization.

The main areas of video localization the media and other entertainment groups, such as Netflix, must perfect before distributing the titles worldwide include dubbing, subtitling, closed captioning, content localization and internalization. While each localization category is patently principal in Netflix’s success, Media & Entertainment Services Alliances (MESA) says the market as a whole spends 70% of its video localization budget on dubbing.

Thanks to dubbing, subbing and other video localization techniques, viewers from all over the world can enjoy their favorite programs and movies in their native language. Sometimes a simple dub is all an American-favorite Netflix series needs in order to do well abroad.

Other times, Netflix uses some keen localization techniques within programs to reach broader audiences. For example, when the video-streaming company wants to target an audience in a certain country, Netflix might actually produce a show in that country and use native actors.

The type of advertising Netflix must do to sell the show also differs per area. While a massive Netflix out-of-home campaign might not sway many American media consumers to turn on “Chef’s Table,” this type of advertising is popular in places like Latin America, where Netflix is using billboards to display upcoming shows as if they’re must-see movies.

In the next entry in this series, we will discuss some of the challenges in video localization that a streaming company like Netflix faces, how Netflix uses technology to help confront and overcome these obstacles, and the future outlook for the media giant.

**At Bromberg, we understand the importance of video localization for businesses and organizations. By investing in localization services, you can be sure that your product, business or organization is not only accessible worldwide, but also appealing to your target audience’s culture. Be sure to read this blog on how website localization can transform your business and contact us to learn how we can help you.