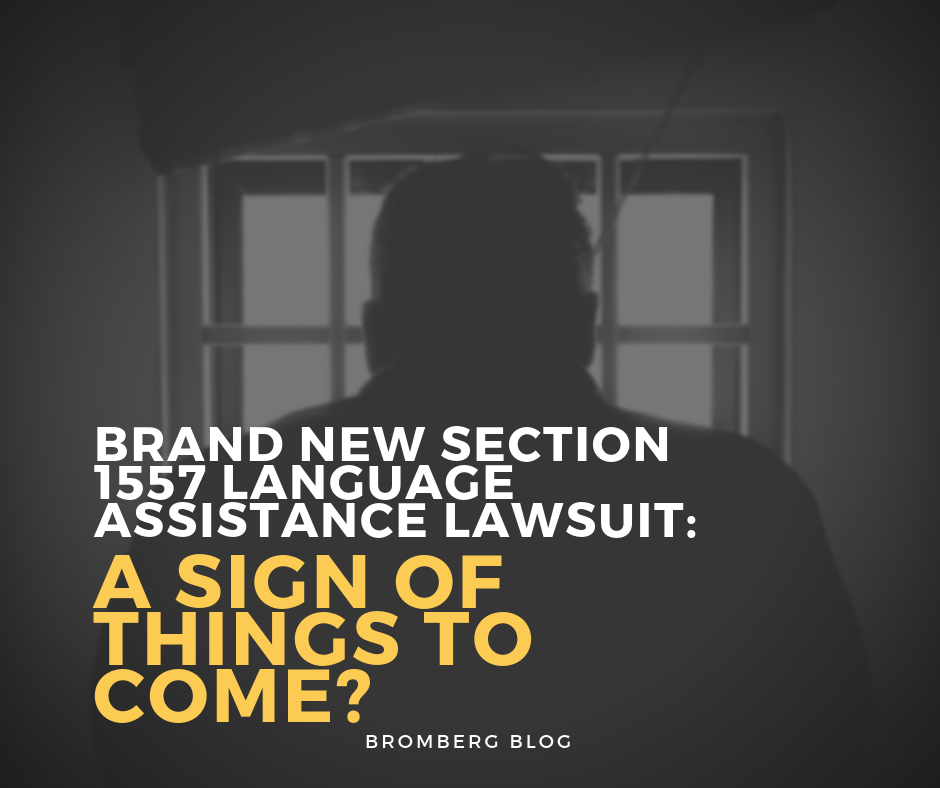 Section 1557 of the Affordable Care Act is the law of the land. The Section’s many health care civil rights requirements became final more than two years ago in 2016. However, the Section 1557 discrimination cases filed since then against health care providers have concerned LGBT or disability discrimination, without seemingly any cases claiming discrimination because a hospital did not provide an interpreter or translated documents to a limited English proficient patient.

That is, until now.

On July 30, 2018, Song Xie sued Memorial Hermann Health System, a large, multi-hospital and clinic health care provider based in Houston. The case was filed in state court, Harris County District Court and not federal court. Xie’s suit has two claims – negligence or medical malpractice for the care he received and Section 1557 discrimination.

As reported by Bloomberg News:

“Song Xie left a Houston hospital a few days after Christmas 2015. He had a stroke less than a week later caused, he says, by inadequate discharge instructions.

… Song Xie’s suit appears to be the only Section 1557 language barrier case against a provider so far… It may be only the tip of the iceberg.”

The complaint filed in this case reveals Song Xie’s allegations and his experience with Memorial Hermann.

Upon Plaintiff’s arrival, he was examined and evaluated. Ultimately, Plaintiff was admitted on December 24, 2015, into Memorial Hermann Hospital in the Texas Medical Center due to Infective Endocarditis, an infection of his heart.

Plaintiff stayed in the hospital for about 5 days. His condition never improved. His heart was still infected and still required observation and highly potent treatment. Yet,

Defendant discharged him on December 29, 2015, handing control of his treatment to his young son who could not speak fluent English.

His son’s failure to speak fluent English is of great significance, as Defendant gave instructions to the son in English. The duties for which the Defendant made the son responsible for were appropriate for a nurse, not a young boy who had never performed any healthcare obligations. Once home from the hospital, after a few days, Plaintiff suffered a stroke and in January, Plaintiff was readmitted back into the hospital.

Among Section 1557’s multiple changes in federal law is one in particular – changing the type of evidence plaintiffs must prove to win their case, from intentional discrimination under prior law to disparate impact. This change makes proving national origin or language based discrimination somewhat easier for patients claiming they were treated disadvantageously because of where they come from or the language they speak.

In a disparate impact case like this one, the outcome focuses on the consequences or effect on Xie of the hospital’s practices. There is no issue about the hospital’s motives, state of mind, malice, or intent. Instead, a plaintiff like Mr. Xie must prove that the failure to provide him with a qualified interpreter and translated materials had a disproportionately adverse effect on him and other LEP patients because of non-English language speaking and reading ability, or national origin language based discrimination.

There are several threshold questions for the Harris County Court to resolve about whether Xie is the victim of Section 1557 discrimination:

In the suit, Xie further claims:

As a result of Plaintiff’s inability to comprehend the English language, Plaintiff was unable to follow these discharge instructions.

The case has a rather novel twist that I have never seen in a national origin discrimination lawsuit. This case also alleges that Xie was discriminated against because the hospital did not allow him to stay in the hospital while paying for his care after discharge.

“Defendant discriminated against Plaintiff by discharging him due to Plaintiff’s inability to pay for his medical services at the time of his hospitalization in Defendant’s hospital. Plaintiff was prohibited from being able to pay for his treatment at a later date, an exercise that is afforded English speaking patients of Defendant.”

The Xie suit is in the very early stages. Memorial Hermann has filed a motion to dismiss the case, arguing that the complaint does not comply with Texas rules for medical malpractice cases.

The suit is scheduled to go to trial in 2019. Before the case gets to trial, however, there will be many developments. If the current attempt to dismiss the case is unsuccessful, Memorial Hermann will likely launch further efforts to dismiss the complaint, raising other legal arguments and defenses.

If the complaint survives, there will be discovery where both sides exchange information such as medical records and hospital policies and both sides schedule depositions where witnesses testify under oath about the suit and Xie’s allegations.

This case is a long time coming, two years after Section 1557’s civil rights regulations became law. But just as attorneys are starting to add Section 1557 claims to their disability discrimination claims, I suspect the Xie case signals the beginning of a similar coming trend in section 1557 national origin and language based discrimination lawsuits against health care providers.