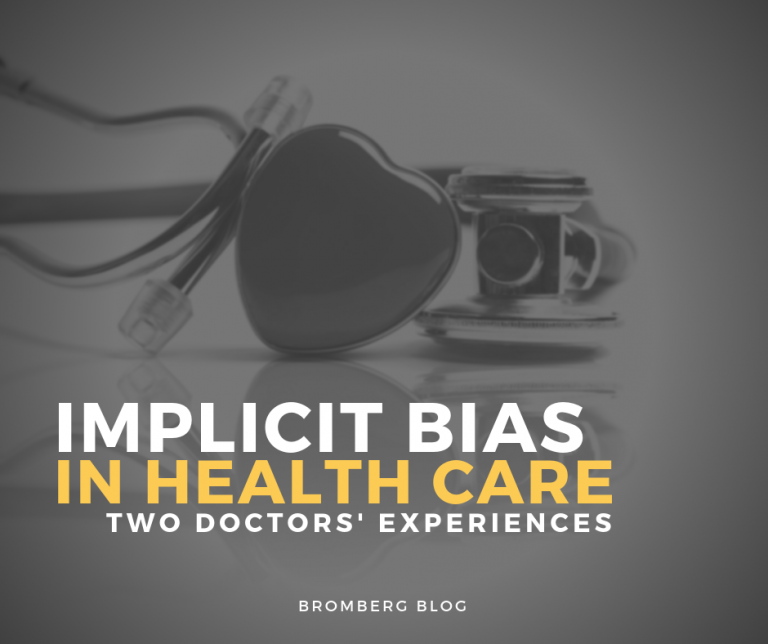 “It’s an all-too-familiar problem,” according to “Addressing Gender and Racial Bias among Clinicians” in Harvard Business Review (HBR). Implicit bias in health care, among providers, physicians, nurses, and patients is well-researched and equally well-known.

Yet, implicit bias continues apace in health care, with gender bias the focus of HBR’s analysis. Just as throughout the work world, “women are often perceived as lower status or somehow less capable than their male counterparts,” wrote HBR Senior Editors Gardiner Morse and Steve Prokesch.

Indeed, “Every female doctor has experienced some version of the story Loren Rabinowitz recently recounted in the New England Journal of Medicine.”

Can Someone Find Me A Doctor?

The senior resident in an ICU, she had just finished a difficult discussion with a patient’s family. As she sat down to document the conversation, the unit’s telephone rang. It was the patient’s wife, with whom she’d just spoken, asking to “talk with his doctor”—Dr. Rabinowitz’s male intern.

As Dr. Rabinowitz describes in her June 2018 NEJM piece, “Perspective – Recognizing Blind Spots — A Remedy for Gender Bias in Medicine,” her story did not end with the patient’s gender bias. Rabinowitz experienced perhaps a surprising twist to the bias encounter.

“He’s on another call. Is there something I can help you with?” I asked.

No, I need to speak with the doctor directly,” she repeated. I paused for a moment, considering whether it was worth clarifying that I was a physician (and one with more seniority), but decided that this woman’s day had been challenging enough.

I waited for Dr. W. to finish his other call and silently handed over the phone. I listened to the patient’s wife repeat our conversation and ask Dr. W. to document that her husband should not undergo resuscitation. Then, I waited for his response — for him to clarify that he was the most junior physician on the team and placing a DNR order was not a task he was able to perform or that I was his senior resident and had already placed the order honoring her and her husband’s wishes.

One of the vexing ironies is that “by many measures women in the workplace perform better than men—a critical point in health care, where life and death may hang in the balance,” according to HBR.  Thus in health care, at least regarding gender, bias actually prevents what studies reveal is often better care by female physicians compared to their male counterparts.

As Johns Hopkins University Professors Christopher Myers and Kathleen Sullivan conclude in their August 2018 report, “How Discrimination against Female Doctors Hurts Patients,” patients treated by female physicians were less likely to die or experience 30-day hospital readmissions than if they had been cared for by male doctors, in studies of 2 million patients.

Patients’ improved health outcomes have also been found in studies of Black patients treated by Black physicians. “Researchers from Stanford, UC Berkeley, and Bridge Clinical Research found that black men seen by black doctors agreed to more, and more-invasive, preventive services than those seen by nonblack doctors, an effect seemingly driven by better communication and greater trust,” according to HBR. “By boosting preventive screenings, the researchers calculate, a workforce with more black doctors could dramatically reduce cardiovascular deaths and increase life expectancy among black men.”

However, despite such better patient outcomes depending upon the race or gender of their doctors, women and African Americans remain insidiously unrepresented at the highest ranks of health care leadership, the result of unconscious or implicit bias, concludes HBR.

A commonly suggested solution to combat implicit bias would be to implement training and educational resources for employees. However, conventional diversity training has been shown to be woefully ineffective. Instead, a more successful approach has helping to make people aware of their biases and their consequent effects on others.

Unexpectedly, Dr. Rabinowitz discovered herself the power of self-awareness approaches when she talked to her intern about their mutual gender bias experience with their patient.

“I have counseled many female students and interns on the importance of properly introducing oneself as a medical student or doctor. Correcting a misperception can feel more challenging.

On that day in the ICU, I failed to assert my own identity. On the one hand, it seemed like the wrong time and place to advise an overwhelmed, soon-to-be widow that she was engaging in sexism. On the other hand, acknowledging sexism’s presence is necessary, even though doing so is nearly always uncomfortable. Broaching the topic is especially difficult in the emotionally fraught context of dealing with sick patients and their families. Next time, I hope I will find a way to be both kind and clear about my role in patient care…

Several hours after that initial conversation in the ICU, I mentioned to my intern that perhaps the patient’s wife didn’t realize that I, too, was a physician, and that moving forward, it might be important to explain the roles of various providers on the patient’s care team.

My intern, a bright and compassionate young man, immediately felt terrible that he had not corrected the patient’s wife. Then he told me how frustrated he gets when, perhaps because of the color of his skin, he is confused for a patient transporter, a physical therapist, or a janitor.

We had both sat through medical school lectures on implicit biases as they relate to patients and health disparities. Until that day in the ICU, it hadn’t occurred to either of us to apply the lessons we learned from bias training to our peers and other hospital personnel, or that it might be our obligation to educate patients about their unconscious biases regarding their health care providers.

That moment of mutual acknowledgment that we all have blind spots and wrestle with how we perceive and are perceived by others will remain among the most important of my residency training. As physicians, we strive to treat all our patients equally. It is imperative that we do the same for our colleagues.”

The epiphany-like moment experienced by these two providers was revealing to both. They saw in real-time, up close and personal, how implicit bias can drive and influence decision making without even being aware it is happening.