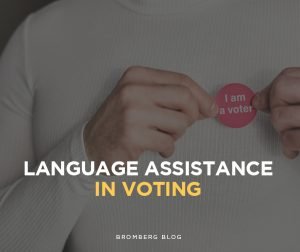 2022 and the New Federal Rules for Language Assistance in Voting

Happy 2022! As the new year begins, so too does the onset of a federal election year, with elections for the U.S. Congress and many statewide offices on the ’22 ballot.

“Through the use of various practices and procedures, citizens of language minorities have been effectively excluded from participation in the electoral process. Among other factors, the denial of the right to vote of such minority group citizens is ordinarily directly related to the unequal educational opportunities afforded them resulting in high illiteracy and low voting participation. The Congress declares that, in order to enforce the guarantees of the fourteenth and fifteenth amendments to the United States Constitution, it is necessary to eliminate such discrimination by prohibiting these practices, and by prescribing other remedial devices.”

On December 8, 2021, the U.S. Census Bureau issued a notice identifying the cities, counties, and states subject to the language assistance provisions of Section 203 of the Voting Rights Act. See Voting Rights Act Amendments of 2006, Determinations Under Section 203, 86Fed. Reg.69,611 (Dec. 8, 2021).

The Voting Rights Act’s language requirements apply to four groups: Alaska Natives; American Indians; Asian-Americans; and Hispanics as well as the distinct languages and dialects within those groups.

Under Section 203(c) of the Voting Rights Act, a state or political subdivision is covered and required to provide language assistance if it has a sufficient number of “limited-English proficient” voting-age U.S. citizens (persons 18 years and older) who experience a higher illiteracy rate than the national average. “Limited English proficient” is defined as the inability “to speak or understand English adequately enough to participate in the electoral process.” 52 U.S.C. § 10503(b)(3)(B).

New Places Required to Provide Election Information in Other Languages

Prince George’s County Council Member Deni Taveras spoke about the impact of the new language requirements for her constituents and county residents. Her comments speak to the vital importance of ensuring that all citizens have full access to elections and voting regardless of the languages they speak.

She said that while non-English speakers already have access to ballots in Spanish, Council Member Taveras hopes that now with the new Census determinations and Voting Rights Act language coverage, more assistance at the polls will be available.

“To me, what that would mean is that every person is asked, ‘Do you need help? Do you need help filling out your ballot,” Taveras said? “We do need Latino people that say ‘Do you need somebody in your language to go help you vote?

Latinos are countywide, so we’ve got to make sure we’ve got Latinos at every precinct,” Taveras added.

Taveras stressed this need because it could be someone’s first time voting, so they may not know their rights or know whom to ask for help. She also underscored the importance of language access for the Spanish-speaking community since Latinos are the fast-growing population in Prince George’s County. Latinos make up nearly 20 percent of the local population, according to the Census.

“We need to start ensuring that the county and all county services and the staff reflect the population that lives in the county,” she says.