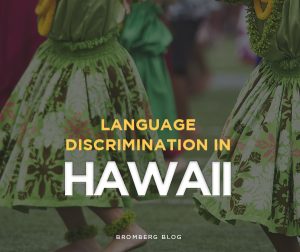 Hawaii is one of the most racially and ethnically diverse states in the United States.  Hawaii’s population is approximately 38% Asian, 26% white, 2% black, and many people of multiple races ethnicities, according to the U.S. Census. Native Hawaiians account for about 20% of the population.

According to ABC News, an estimated 15,000 to 20,000 Micronesians live in Hawaii. In the 1990s, they began immigrating to the state in large numbers searching for new economic and educational opportunities.

Micronesia is part of the Compact of Free Association (COFA), which allows citizens from the Federated States of Micronesia, the Republic of the Marshall Islands and the Republic of Palau to live and work freely in the United States in exchange for allowing the U.S. to operate military bases and control strategic land and water areas in the region.

Micronesia is about 2,500 miles southwest of Hawaii and consists of 607 islands with a population of approximately 107,000 people. There is a high percentage of limited English proficiency among people of the COFA states who move to Hawaii. They speak such languages as Chuukese, Palauan, and Marshallese.  Chuukese, for example,  is a Trukic language of the Austronesian language family spoken primarily on the islands of Chuuk in the Caroline Islands in Micronesia. There are estimated to be more than about 45,000 Chuukese speakers in Micronesia.

According to ABC News, Micronesians experience significant discrimination in Hawaii.

A Palauan born and raised in Oregon, Ongelungel came to Hawaii ‘because all I wanted to do was to fit in and be around Pacific Islanders and know what it was like to not stand out like a sore thumb.’

When she first got here, a cousin advised her to tell potential employers she was from Oregon. ‘If you tell them you’re Micronesian, you won’t get a job,’ she said her cousin told her.

She wasn’t prepared for the racism in Hawaii, and so she left after a year. Ongelungel said she felt equipped to deal with the racism on the U.S. mainland against those who are not white. ‘I didn’t have training to fight people who looked like my actual blood relatives,’ she said.

The COVID pandemic has exacerbated and cast a harsh bright light on racial and language based discrimination and disparities, such as what Ms. Ongelungel experienced in Honolulu.

For example, according to the Center for American Progress discussed this very point:

A June 2021 Honolulu Civil Beat column by Philios Uruman, a Chuukese interpreter in Hawaii, provides a personal take on the language and discrimination challenges faced by Micronesians in Hawaii.

“As a Chuukese interpreter for immigrants from the Federated States of Micronesia, I’ve noticed a disturbing trend. Over the last six years, more immigrants from Micronesia are coming to Hawaii for medical treatment, seeking jobs and to extend their education. More so, due to global warming numerous Micronesian will move out to these islands. Their homes have flooded or washed away entirely.

But the trouble doesn’t end there. When they arrive, their lack of English and unfamiliarity with government agencies makes it difficult for them to apply for any government assistance or even understand what services are available. As a result, an already vulnerable population becomes even more so.

When my family first arrived in 2003 to obtain critical surgery for my older brother, language barriers prevented us from accessing health care, food stamps and public housing…

The challenges that our immigrant communities face have worsened. I spent the last year as a contact tracer and COVID-19 relief coordinator for the Pacific Islander and Micronesian communities. The data on these populations reflected what I saw first hand: Confusion and lack of access to health care meant that Micronesians accounted for one-third of all COVID-19 cases in Hawaii, making us five times more likely to catch the virus. Of course we weren’t informed; everything on the news is in English.

We need the state government to take language access seriously. This starts with enforcing civil rights laws and state language access laws. We need the government to increase support for the Hawaii Office of Language Access, which was designed to implement and enforce those laws. OLA should be able to offer in-person interpreters who can travel to people’s homes. They should have the funding to translate government websites into multiple languages. And they should be able to provide support services for limited English speakers in Hawaii schools.

Such measures would be life-changing for immigrants in Hawaii. Laid-off Micronesian hospitality workers would be able to apply for unemployment benefits, access health care coverage and receive rental assistance.

Hawaii must evolve and meet the needs of all island residents. The University of Hawaii’s Center for Interpretation and Translation Studies, the Hawaii State Judiciary Office on Equality and Access to the Courts and the Office of Language Access must work together.

But they also need the state to commit to providing equal access to government services, support enforcement and start translating. People need to be empowered  — and that starts with communication.”

Decades-old federal laws require interpreter and translation services for Limited English Proficient (LEP) people from federally subsidized government agencies, hospitals and health care providers. However, despite these well-established statutes (such as Title VI of the Civil Rights Act of 1964) and court decisions (such as Lau v. Nichols, 414 U.S. 563 (1974)) language and national origin based gaps remain, with many communities, such as Hawaii’s Micronesian community, not being afforded the fundamental civil rights required and guaranteed under law.