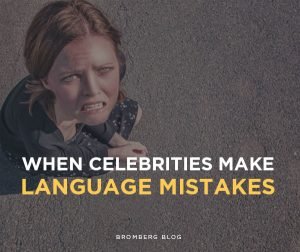 Language is at its best when it goes spectacularly wrong, despite the fact that we all put so much effort into getting it right. Many of the most famous language fails are indelible in our collective memory, and we still recall plenty of mistranslations. Not to mention the more mundane ways Google Translate betrays us.

What happens when celebrities make a mistake? As it turns out, being a famous artist does not protect you from poorly translated foreign language tattoos even if you can afford your own personal translator, and you are an elected official handling international affairs, you are not completely safe from becoming a global  laughingstock .

So, to entertain you while also making you feel better about making foolish mistakes on your own journey to conversational proficiency, here are a few famous celebrity language failures.

The following isn’t truly a language fail, but it has been characterized as one so emphatically in the public mind, that it still deserves a place on our list in an indirect way. President John F. Kennedy declared himself a Berliner during his memorable speech at the Berlin Wall, saying, “Ich bin ein Berliner.” Years later, it became general knowledge that he had actually referred to himself as a pastry because Berliner was also a word for “jelly doughnut.” However, because that word was not commonly used in Berlin, those who heard his speech understood what he was attempting to say.

Former New York City Mayor Michael Bloomberg was dubbed El Bloombito — complete with an honorary parody Twitter account — following his 2011 press conference preparing the city for Hurricane Irene, during which he offered some very stilted advice in what can only be described as Spanish-esque, or crude Spanglish.

“Despacito” by Luis Fonsi and Daddy Yankee was a chart leader for a while, but that doesn’t mean everyone in the English-speaking globe knew every word — not even the ones featured in one of the remixes. Justin Bieber was severely chastised for forgetting the words to “Despacito” at a May 2017 concert in New York City. He can be heard singing “blah blah blah,” as well as “I don’t know the words, so I say ‘Dorito,'” and “I ate a burrito, I just want a burrito.”

Okay, but while we’re on the subject of strange accents, how about Lindsay Lohan’s? This one has us all scratching our heads because we’re quite sure she didn’t speak like that before. But in 2016, she developed a bizarre new accent, which she explained was a travel souvenir from her time in Dubai and Greece.

She once told The Daily Mail that “it’s a blend of most of the languages I can understand or am trying to learn.” Since I was a child, I’ve been learning numerous languages. “I speak English and French fluently, understand Russian, and am learning Turkish, Italian, and Arabic.”

According to one psychological hypothesis, she may be taking a normal inclination toward mimicry — or making oneself sound more like the person you’re talking to — and turning it into creating a full-fledged affectation. In any case, it’s entertaining to listen to.

Ariana Grande, hers was engraved on her body (and also on the internet). The singer attempted to get the name of one of her tracks, “7 Rings,” tattooed in Japanese on her palm. Unfortunately, her tattoo said shichirin (七輪), which translates to “barbecue grill.” She made a serious attempt to rectify it by adding another kanji, but all it accomplished was to make her tattoo read “barbecue grill finger.”

There is a list of the 25 most recent tweets from each of Twitter’s top 150+ celebs, according to the number of followers. The tweets were then checked by a team of proofreaders for language spelling and grammatical problems. Here’s a high-level summary of what was discovered:

With an average of 14.5 errors per 100 words, musicians are the poorest writers of any celebrity category, including politicians, actors, athletes, and business leaders.

Error: We’ve got more spelling mistakes here. “Columbia” should be “Colombia” and “Philippians” should be “Philippines.” These mistakes are made all the worse by the fact that they were the celebrity’s second public blunder of the evening involving Miss Colombia and Miss Philippines.

Celebrity: Steve Harvey (tweeting about his mistake when announcing the 2016 winner of Miss Universe)

Error: This tweet contains a spelling mistake. The celebrity who posted it meant to write “honor.”

Celebrity: Donald Trump (The references to a “poll” and “the debate” might have given this one away.)

Error: Looks like this celebrity added an extra word “at” to this tweet. Note that because of just this one extra word, the tweet is hard to understand the first few times you read it. You can fix the error by removing the extra word.

Don’t make the same mistakes they did.