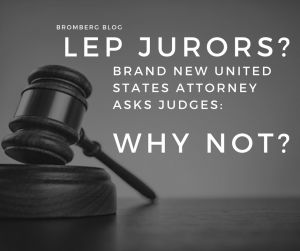 Juries regularly include deaf and hard of hearing people. Many judges have no second thought about providing sign language interpreters for deaf and hard of hearing jurors, including in the jury deliberation room. But prospective jurors who are Limited English Proficient (LEP), and speak little or no English? The rules and practices seem to be different for them.

In my experience, most judges do not permit LEP people to serve on juries. They often cite the importance of jurors being able to understand English in order to serve.

However, excluding people from jury service solely because of their national origin or language always seemed to run afoul of Title VI of the Civil Rights Act of 1964, which prohibits national origin and language based discrimination by federally subsidized state courts. The anomaly of deaf people serving as jurors while routinely excluding LEP people is especially ironic since the Americans with Disabilities Act, which protects the rights of deaf people, was modeled after the 1964 Civil Rights Act, which prohibits discrimination against LEP people.

Well, this distinction may soon change.

Mr. Pak’s Challenge to the Judge

According to the October 13, 2017 edition of the Daily Report, Byung J. Pak, the new United States Attorney for the Northern District of Georgia, urged the National Association of Women Judges in Atlanta to give greater consideration to allowing first-generation naturalized U.S. citizens to sit on juries even though English is their second language. Pak emigrated from South Korea as a child. He was sworn in [in October] as the state’s first Asian-American U.S attorney.

‘I’m not telling you to keep first-generation, naturalized U.S. citizens on a jury,’ he said.

‘But if you look at it from the perspective of educating a prospective juror about the court system, the role of the jury, the role of a judge, we are missing an opportunity if you conveniently use the excuse that their English is not up to par, and you use that for cause to strike that individual. It is the role of the judiciary to challenge those assumptions that even ethnic minorities have about themselves,’ he said.”

Mr. Pak continued his address to the judges, drawing on his personal courtroom history as a prosecutor.  He especially recalled the prospective juror whom a judge struck from a jury panel because of her English language ability.

“The Juror that got Away”

According to the Daily Report article:

“Pak knows from personal experience, telling the judges of ‘the juror that got away’ when he was a federal prosecutor in Atlanta. Her name was Ms. Kim and she was a rarity—an Asian-American woman on a federal jury panel in Atlanta. He said he knew immediately she was Korean because of her last name.

Pak said he knew that she, too, had made a cultural connection. They nodded at each other as she was ushered in—a gesture that did not go unnoticed by Pak’s opposing counsel. He knew he might have to fight to keep her on the jury. But he said he was dismayed when the presiding judge asked if any potential juror had any reason why they couldn’t serve, and Kim raised her hand.

She told the judge she didn’t know whether she understood English well enough to serve. ‘Like a cheetah jumping on a gazelle,’ the defense asked she be dismissed for cause, Pak recalled. Pak said he didn’t want to let her go so easily, and, if she was dismissed, he wanted it to cost the defense a strike. So he asked and was given permission to question her.

He learned she was married to an American Caucasian, that she and her husband owned a Japanese restaurant, and that she was the restaurant’s manager and sometimes served as hostess. She had been in the U.S. 28 years. She had capably filled out the juror questionnaire, found her way to the downtown courthouse and answered the judge’s and the lawyers’ questions.

‘Your honor, she’s been in the United States longer than me,’ Pak said. Pak recalled the judge’s reply;

‘I can’t understand half the things you say, either.’ Then he dismissed Kim for cause.

As Kim passed by on her way out, she stopped by the prosecutor’s table. ‘I’m very proud of you, she said.

LEP Jurors: Why Not?

In Gwinnett County, which Pak represented during three terms in the Georgia General Assembly, nearly a third of its population speaks another language at home other than English. About 120 foreign languages are spoken by students in the county’s schools. Selecting a jury of one’s peers is a concept now embedded in America’s judicial system, he said.

Reminding his audience that, for decades, women were barred from jury service in much of the nation or could opt out simply because they were women, he suggested that a perceived language barrier that may not exist is at work in preventing more first-generation naturalized citizens from sitting on juries.

‘It’s troubling,’ he said, adding that he suspects it contributes to a growing lack of civic knowledge throughout the population at large. ‘We live in a multicultural society,’ he said. Jury service, he added, ‘will certainly pay dividends in helping new citizens learn about their government. Would you strike Ms. Kim off a jury? For cause? Maybe. Maybe not.’

But Pak concluded, ‘The next time you face another Ms. Kim on a jury panel, you think about it before you make your ruling.”

State court judges should also be mindful of federal non-discrimination law before excluding an LEP person from jury duty. Perhaps these judges should wonder why providing sign language interpreters for deaf and hard of people so they can serve as jurors is different than affording spoken language interpreters to LEP people so they too can serve their communities as jurors.