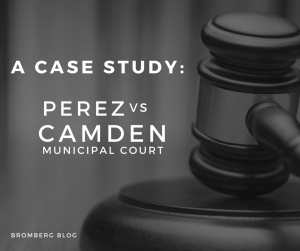 2017 has been a very big year for court cases and decisions about language and disability access. Keeping track of where the courts are and what they are ruling is a big part of understanding legal rights and requirements.

As discussed in a previous blog, “It is emphatically the province and duty of the [Courts] to say what the law is,” according to Chief Justice of the United States John Marshall in his landmark 1803 decision in the seminal case of Marbury v. Madison.

Remember that the final deciders about the law are the courts. Court cases can take a lot of time until judges make decisions that explain and determine what the law says and means. Some people may lose interest as court cases move their way through the system.

An Influx of Discrimination Cases

This year, federal courts have seen a flood of cases alleging disability discrimination under the Americans with Disabilities Act (ADA), Rehabilitation Act of 1973, and Section 1557 of the Affordable Care Act.

Tracking these cases and waiting them out is vitally important because in the end, the decisions that come from these cases tell us “what the law is,” and inform our rights, obligations, and remedies if we feel we have experienced discrimination.

Coincidentally, two of these ADA cases come from New Jersey, where deaf litigants sued New Jersey state courts for not providing sign language interpreters as requested. In one of these cases, an appeals court just came out with a decision that retains the lower court’s conclusions about disability discrimination.

However, Plaintiff failed to complete the program and the reason why is a subject of dispute between the parties. Plaintiff alleges that the IDRC failed to provide him an interpreter … and Defendants assert that Plaintiff decided not to attend despite accommodations that the IDRC offered…”

Remarkably, according to U.S. District Judge Kugler, “Out of eight court proceedings, Plaintiff was provided an interpreter for only one instance.” Instead of using interpreters, the Camden Court used written notes to communicate with Perez, even though he could barely read written English and had told the New Jersey court officials that written notes were not an “effective communication” method for him. As the federal court found, “It is undisputed that plaintiff is profoundly deaf, cannot lip read, and reads written material at a second-grade level; no reasonable trier of fact could conclude that the exchange of written notes would afford plaintiff meaningful access to court proceedings.”

What was the Outcome?

Judge Kugler ruled that the Camden Court’s failure to provide Perez with sign language interpreters for court proceedings was illegal ADA discrimination. The judge decided, “Plaintiff here furnishes ample evidence that he would have been able to participate in and understand [court] hearings … had [the Camden Municipal Court] provided an interpreter. Therefore, Plaintiff has made out a prima facie case against Defendants under Title II of the ADA….Defendants violated Title II as a matter of law, the Court grants Plaintiff partial summary judgment on liability.”

So, the trial judge effectively slammed the Camden Municipal Court, finding the Court guilty and liable for federal disability discrimination.

What happened next? You might think the City of Camden would try to work out a settlement with Mr. Perez after reading what Judge Kugler decided.

Well, no. Instead, Camden appealed to the U.S. Court of Appeals for the Third Circuit.

When a case is over, when a judge makes a “final” decision that basically ends the case, that decision can be appealed. But, was Judge Kugler’s decision “final?”

Well, the appeals court on October 25, 2017 decided not so fast. The Third Circuit Court of Appeals determined that Judge Kugler still had more work to do so his decision could not be appealed yet. The Third Circuit ruled: “Because we lack jurisdiction, we dismiss this appeal.”

So, to quote a well-known Baseball Hall of Famer Yogi Berra axiom, “It ain’t over ‘till it’s over.” The case of Perez v. Camden Municipal Court is far from over. The next step – money damages for discrimination to award Mr. Perez. How much money should a deaf person be paid for not having access to court proceedings and being denied a sign language interpreter 7 out of 8 times?

When that decision comes, we will again see the words of John Marshall in action – “It is emphatically the province and duty of the [Courts] to say what the law is,”