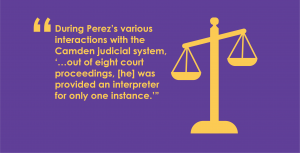 Sometimes — indeed, more often than not — knowing and understanding the law in a certain situation can be a tough assignment. And sometimes, lawyers and judges are uncertain exactly what to do, legally.

A recent federal court Americans with Disabilities Act – American Sign Language decision is a perfect example of how judges make legal mistakes, too.

On Dec. 19, a federal court in New Jersey decided that the Camden (NJ) Municipal Court violated the Americans with Disabilities Act by declining to provide sign language interpreters for Miguel Perez, a deaf man whose preferred communication method is American Sign Language.  According to the federal court, Perez cannot speak intelligibly, read lips, or read written English beyond a second grade level

U.S. District Court Judge Kugler decided that the municipal court failed to honor Perez’s requests for sign language interpreters at least seven times.  Instead of providing interpreters, the municipal court often relied on written notes for communicating with Perez, Judge Kugler opined, although Perez told the Camden Municipal Court Judge that this communication method was not effective for him.

Before Perez’s first court date, he called the Municipal Court to notify court personnel that he is deaf and needed an ASL interpreter to communicate and to request an interpreter.  When Perez arrived at the courthouse, he was not provided an interpreter and “… waited several hours in confusion.”

“After five hours of waiting, [Perez] appeared before Municipal Court Judge Steven Burkett who instructed someone to hand [Perez] a piece of paper” on which court personnel had written that Perez had to return to court on another date.

However, when Perez returned to court several weeks later, “… he was again not provided an interpreter, which Judge Burkett explained was because of ‘financial reasons.’”

During Perez’s various interactions with the Camden judicial system, “…out of eight court proceedings, [he] was provided an interpreter for only one instance.”

Perez filed a federal lawsuit alleging that the Camden Court discriminated against him because he was not provided with an ASL interpreter to enable effective communications between him and the Municipal Court.

The Federal Courts Weigh In

The federal court rejected the Camden Court’s arguments that providing a sign language interpreter would be too costly and that they had acted reasonably toward Mr. Perez as defenses against Perez’s disability discrimination claim.

Simply put, the federal court decided that “… no reasonable trier of fact could conclude that the exchange of written notes would afford [Perez] meaningful access to court proceedings.”

As stated in the federal court ruling: “… [Perez] here furnishes ample evidence that he would have been able to participate in and understand the [municipal court] hearings had Defendants provided an interpreter.  Therefore, Plaintiff has made out a prima facie case against Defendants under Title II of the ADA.”

So, sometimes, even judges searching for explanations about their legal obligations can make mistakes. And in the Perez case, the Camden mistakes could prove costly — the federal court also ruled that Perez is legally able to seek monetary damages against the City of Camden.