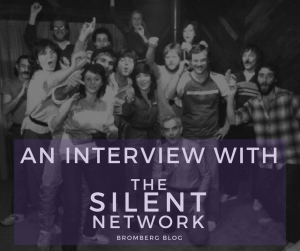 An Interview With The Silent Network

We recently had the chance to interview a fellow Brombergian, Robin Byers-Pierce. In addition to her duties at Bromberg & Associates as a VRI Manager, Robin also dedicates her time to The Silent Network.

How long has the silent network been around?

It started in 1979 as a national satellite television network transmitting to 17 million television households in the US and Canada which ran until 2000. It was relaunched as an Over-The-Top (OTT) television service in 2017.

**OTT refers to a TV service that provides delivery of film and TV content via the internet, without requiring users to subscribe to a traditional cable or satellite pay-TV service.

What exactly is your role at The Silent Network?

I originally came to TSN as the network interpreter. I took that role and expanded to include acquisitions where I became the Acquisitions Manager. I learned how to edit and I ended up producing several shows [and] worked on production generally as the Production Assistant or Associate Producer. I also began writing promos and ad copy which led to me writing, editing and producing promos and other commercial spots.

TSN sadly closed it’s doors in 2000 but I continued to work with Davideo Productions primarily doing the audio editing, captioning, work with new productions and the ever present “other duties as assigned”. We set up the Deaf Television Foundation (DTF) where I currently serve as Foundation secretary. The DTF was established to preserve the work that has been done by The Silent Network and to archive work by Deaf and HoH actors and producers.

How would you rate the importance of providing content and television programming specifically for those who are deaf and hard of hearing and why?

The Deaf and Hard of Hearing communities are often under-served and overlooked. All programming being 100% open captioned is a crucial point. No extra equipment is need to access the programs. The captioning also makes it an excellent literacy tool.

Programming and content is by, for or about Deaf and HoH people but is “Entertainment for Everyone”. Deaf filmmakers have an outlet to possibly air their work; be it a deaf related topic or not. One of our programs deals with the difficulty of adolescence. It is difficult for hearing teens to get accurate information and the difficulty finding accessible accurate information when you are deaf is compounded. Handle With Care is signed, has full voice, and is open captioned. The information is there if you are deaf, HoH, or hearing.

Do any of the producers or writers work with members of the deaf community directly to come up with show ideas and programs?

The founder, Sheldon Altfeld, worked with the Deaf community from the inception of the concept in 1979. He hired Deaf and Hard of Hearing people for everything from crew to writers to post production work. He may have been hearing but recognized the need for input from the target community. The Chief Operating Officer and the Foundation officers are deaf with the exception of me who now is classified as Hard of Hearing.

What are some of the challenges you faced with The Silent Network?

One of the greatest challenges is keeping content broad enough so that it is not just deaf programming-it is for everyone. Comedy shows, technology shows, travel shows… all are for all people.

What is something you are most proud of that The Silent Network has accomplished over the years?

Silent Network was a pioneer in providing programming to deaf and hard of hearing audiences in a cut-throat television industry that had not previously delved into serving this market segment. We are pleased to be able to provide a platform for the Deaf and hard of hearing community to express its interests and concerns that specifically affect them.

What’s your favorite program currently offered on the network?

Travel Flashbacks is one of my favorites. It is old footage of various locations and showing how it looked then and now. It is amazing to see the comparison.

How do you manage your responsibilities at the network with your duties as a VRI Manager at Bromberg?

I have great teams on both ends. I can do the audio work in the evenings and weekends while logged into VRI. The room next to my VRI office is an edit suite for me to do my TSN work so I can still be on VRI duty and do my audio editing. A baby monitor keeps me listening for VRI calls, and the run is close enough for me to maintain my 20 second answer time. I do the narration work for programs while I have VRI back up so that I am not interrupted by a call.

A complete change of scenery seems to clear and refresh my mind so I can dedicate myself to both tasks and not get “burned out” by either one. I have become good at juggling.

Where can we find out more information?

The TSN website is at www.TheSilentNetwork.tv and the network can now be accessed via subscription at www.STV.life.

Be sure to reach out to Bromberg if your organization needs to add subtitles to your video content. With translators available in over 170 languages, we’re ready to help you with subtitling projects of any size or scope. Also be sure to check out this post before deciding between Subtitles and Voiceovers.