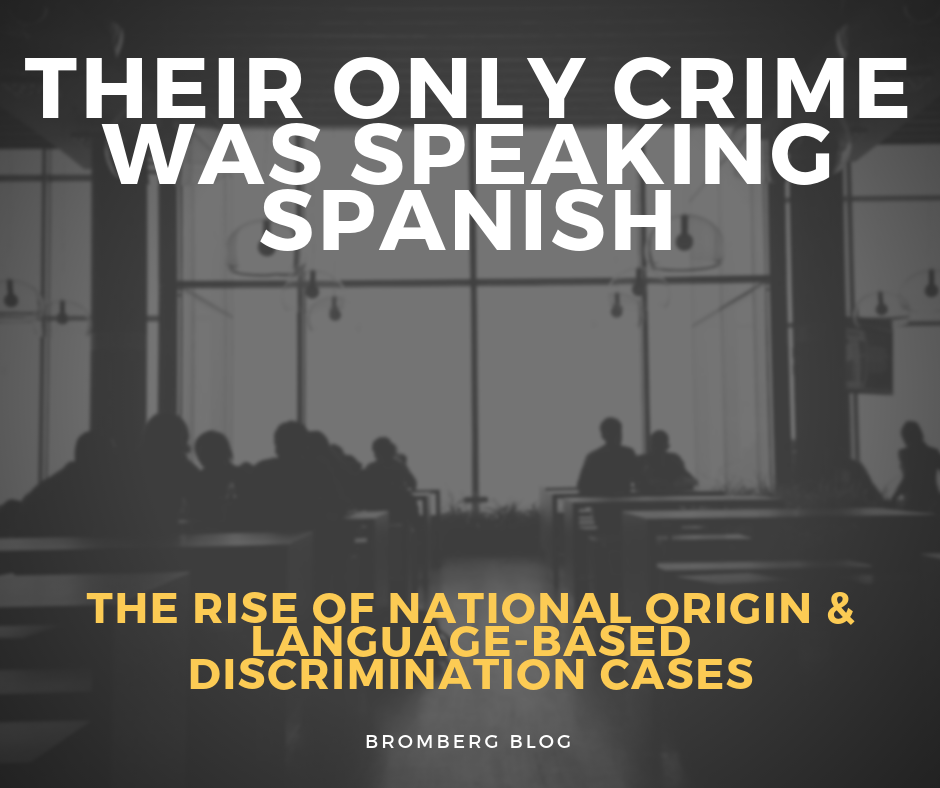 The only probable “crime” was speaking Spanish

Government data, media reports, and anecdotal information all confirm one troubling reality – Bias and hate incidents are increasing. As the intolerance temperature continues its rise, the classifications of bias & hate incidents we see are diversifying, involving myriad groups of people and discriminatory rationales, based on race, color, religion, gender, and sexual orientation. One additional rationale involves national origin and speaking Spanish.

A recent opinion piece in The Hill recalled a 2018 incident where a Border Patrol agent detained and questioned two American women in a small Montana town near the Canadian border for, as the agent explained, “Speaking Spanish.” The two women sued the Border Patrol in 2019 for constitutional and civil rights violations.

As The Hill reported:

“… In [the agent’s] own words, the only probable “crime” was speaking Spanish while waiting in line to pay for milk and eggs. Mind you, not any other language, just Spanish — a point the agent pretty much conceded by acknowledging on camera he would not have asked for ID if they had been speaking French. In addition to the Fourth Amendment, Title VI of the Civil Rights Act protects everybody from discrimination based on race, religion, or national origin. If a border patrol agent detains you with no probable cause other than speaking Spanish that is a violation of your civil rights.”

National origin & language-based discrimination cases are on the rise

Encounters with law enforcement, heightened suspicion, and disparate treatment because of spoken language did not end with the Montana incident. Other similar language-based situations of possible and proven discrimination have also been reported.

In a 2019 settlement and court ordered consent decree, Pape Material Handling, Inc., a nationwide company that sells, rents, and services forklift products, agreed to pay $650,000 to resolve claims of national origin and language-based discrimination and ongoing harassment against the company’s Hispanic employees.

In a press release from the U.S. Equal Employment Commission (EEOC), which sued Pape:

“The EEOC’s lawsuit charged Pape Material Handling with allowing employees at its Fresno, Calif., facility to engage in ongoing harassment of Hispanic employees. Such harassment included mocking employees’ accents and using derogatory slurs. The EEOC claimed that the company failed to address employee complaints, leaving employees to quit as their only recourse to avoid the misbehavior.

In addition to the monetary relief, Pape Material Handling will obtain an EEO consultant; conduct internal audits; review and revise its anti-harassment policies; create complaint procedures; develop a centralized tracking system for harassment and discrimination complaints; implement training for its human resources and hiring personnel; and submit annual reports to the EEOC verifying compliance with this decree. The court will maintain jurisdiction of the case for the decree’s three-year term.”

In 2016 guidance, the EEOC defines national origin discrimination broadly as:

“… including, but not limited to, the denial of equal employment opportunity because of an individual’s, or his or her ancestor’s, place of origin; or because an individual has the physical, cultural or linguistic characteristics of a national origin group….

Restrictive language policies implicate national origin because an individual’s primary language is closely tied to his or her cultural and ethnic identity….

Examples of national origin & language discrimination at work include ethnic slurs, ridicule, intimidation, workplace graffiti, physical violence, or other offensive conduct directed toward an individual because of his birthplace, ethnicity, culture, language, dress, or foreign accent.”

The EEOC’s court filed compliant provides additional details about the alleged discriminatory conduct in this case:

“Since at least 2012, [the plaintiff] and other employees have been subjected to ongoing and unwelcome harassment based on their national origin (Hispanic or Mexican), including but not limited to weekly and at times daily use of derogatory phrases [and the] mocking of Hispanic employees’ accents [and] saying Mexicans should go back to where they came from…”

The EEOC’s complaint further alleged that the harassment occurred constantly and was “….perpetrated in front of supervisors.”

In another 2019 complaint filed with state authorities in California, Francisca Pérez alleged that she was fired from her job as a cook in a California restaurant for speaking Spanish.

According to federal law, English-only workplace rules are customarily illegal.

“A rule requiring employees to speak only English at all times in the workplace is a burdensome term and condition of employment. Therefore, the [EEOC] will presume that such a rule violates title VII and will closely scrutinize it,” as stated by the EEOC in its 2016 guidance.

As reported by NBC:

“Francisca Pérez said she was going about her job as a line cook at a high-end California restaurant, where she worked for over a decade, when the owner fired her for speaking Spanish to a fellow worker.

‘I felt humiliated,’ Pérez told NBC News. “I felt I was not worth anything in this country.”

Pérez said that last May she and a recently hired waitress, Janet Ruelas-Nava, exchanged a few words in Spanish about whether a dish was ready to go out at Osteria Fasulo in Davis, west of Sacramento.

Pérez said the owner, Leonardo Fasulo, heard them and started yelling at Ruelas, saying they shouldn’t speak Spanish at work.

Ruelas, who was born in the United States, wrote a letter in support of Pérez that quoted Fasula as saying, “You didn’t travel thousands of miles away from your country to not speak the language.”

Pérez said she confronted Fasula and told him he was discriminating against Mexicans, even though they are the ones who are “sacando tu trabajo”— getting his work done.

Fasula became furious, Pérez said, and asked her if she wanted him to put burritos on the menu. He said: “This is America. We speak English here,” according to her account.

Pérez said the exchange occurred in front of her son, who had just walked in after being dropped off near the end of her shift.

… Pérez told NBC News that when she was hired by Fasulo, their conversation was entirely in Spanish and he never expressed opposition to using the language at work. When he hired her, ‘he treated me well — he was a good person,’ she said. But after a few years, she said he began to change and would often yell at employees, making some of the servers cry at times.

‘My son is happy I’m doing all of this because he hopes it doesn’t happen to anyone else,’ Pérez said.

She said she told her son, “I want you to study hard so that you can get ahead so you don’t have to go through what I have experienced.’

The law provides one way to respond to all bias and hate incidents, including those based on someone’s spoken language, accent, or national origin.