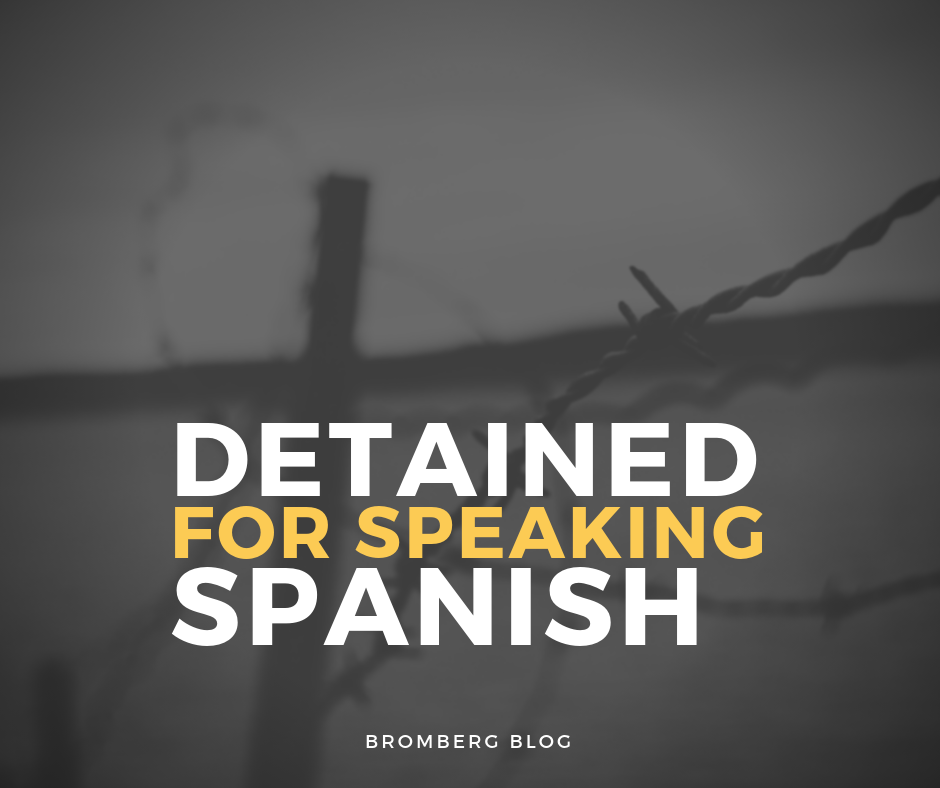 Two women filed a federal lawsuit in February 2019 against the U.S. Customs and Border Protection (CBP) agency. The women, Ana Suda and Martha Hernandez, were stopped last spring near the US/Canada border by a CBP agent who asked for their identification because he heard them speaking Spanish.

The border agent, identified in the lawsuit as Paul A. O’Neal, stopped the two Americans inside a convenience store in the small border town of Havre, Montana. The agent detained them in the store’s parking lot for about 40 minutes, according to the federal complaint.

The lawsuit alleges that O’Neal commented on Ms. Hernandez’s accent, calling it “very strong,” and then asked where they were born. Ms. Hernandez was born in California and Ms. Suda in Texas, according to the complaint filed in U.S. District Court for the District of Montana. The women are represented by the ACLU.

CBP Agent O’Neal further commented that he stopped, questioned, and detained Ms. Suda and Ms. Hernandez “…because he heard them speaking Spanish. He offered no other justification for their detention and there was no reason to believe that [they] had violated any law,” according to the complaint. Their lawsuit also claims that O’Neal’s supervisor “… confirmed that French-speakers would not be similarly detained,” suggesting that CBP relied on plaintiffs’ “use of Spanish as [an unconstitutional] justification and proxy for race [discrimination].”

“When the women expressed shock at the agent’s question, he told them he was “dead serious” and asked to see their identification, the lawsuit alleges.

After they showed the agent their valid Montana driver’s licenses, he briefly detained them in the store’s parking lot, the suit contends. The women then began to film the encounter on their phones, and asked the agent on video why they were being stopped.

“Ma’am the reason I asked you for your ID is I came in here and I saw you guys are speaking Spanish, which is very unheard of up here,” the agent said, looking into the camera.

One of the women then asked if they had been stopped because of their “racial profiles.”

“No, it has nothing to do with that,” he replied, according to the video. “It’s the fact that it has to do with you guys speaking Spanish in the store in a state where it is predominantly English speaking, O.K.?”

The women’s lawsuit addresses these issues. They allege violations of the U.S. Constitution and claim that language based law enforcement detention is illegal. The plaintiffs also discuss the realities of language usage in today’s United States.

What is the Official Language of the US?

According to the federal complaint:

“America is a multi-lingual, multi-racial, and multi-ethnic country. Many United States citizens speak languages other than English. So do many non-citizens who have a right or permission to be in this country under our laws.

The United States has no official language. Many United States citizens, and many non-citizens who are in this country lawfully, are not fluent in English.

For millions of Americans, languages other than English are an important aspect of their identity and a vital link to their communities, cultures, and families.

The New York Times also contacted CBP and ACLU for additional comment. According to the Times article:

“As a matter of policy, U.S. Customs and Border Protection does not comment on pending litigation,” Jason Givens, an agency spokesman, said in an email. “However, lack of comment should not be construed as agreement or stipulation with any of the allegations.”

Efforts to locate Mr. O’Neal on Thursday evening were not immediately successful.

What does the Law Say?

In a statement, the A.C.L.U. said that it was unconstitutional for law enforcement or immigration agents to detain people because of their language, accent or race. Cody Wofsy, a lawyer with the organization’s Immigrants’ Rights Project, said he saw the case “as a part of a broader pattern of abusive conduct by an out-of-control agency.”

“This is an opportunity for the courts to step in and say there are constitutional limits on what C.B.P. can do,” he said. “This is certainly nothing new based on what we have seen over the last couple of years of the Trump administration. The agency has been emboldened to act on some of its worst impulses.””

This case also spotlights the far-reaching power of Customs and Border Protection under current U.S. law according to long-standing court precedent.  CBP agents have jurisdiction to detain and question people up to 100 miles from an international border, a vast area that is home to almost two-thirds of the population of the United States.

9,000 people live in Havre, MT, which also hosts a CBP field office with 183 agents who patrol over 450 miles of the U.S./Canadian border.

CBP’s jurisdiction also comes with established legal limits. For example, as the Times noted, the U.S. Court of Appeals for the Ninth Circuit, which includes Montana, previously decided that border agents illegally detained five Latino men in Havre in 2004. The appeals court ruled that the men’s “apparent Hispanic ethnicity, although a relevant factor in the reasonable suspicion inquiry, cannot by itself justify an investigatory stop in a border area.”

Ms. Hernandez and Ms. Suda were both distraught at the time of their detention. According to the NY Times,

“In a statement, Ms. Suda said the experience had been humiliating and had led to her and Ms. Hernandez being shunned by other residents in Havre. Ms. Suda said her daughter was afraid to speak Spanish and now responds in English when her mother speaks to her in Spanish “because she is scared.”

This changed our lives, I believe, forever,” Ms. Suda said.”

*Read some of Bruce Adelson’s other blog posts to learn about more developments in language access law, and be sure to contact us if you’re interested in a consultation about your own organization’s compliance with federal language access law.

Check out the blog, ‘Implicit Bias in Health Care: Two Doctors’ Experiences’  and “No Spanish Here, English Only!”  for another perspective on culture awareness and implicit bias.