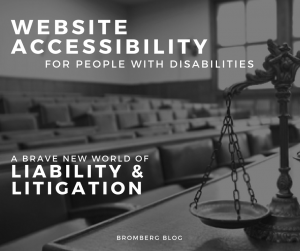 Welcome to the brave new world of website and online accessibility compliance with the Americans with Disabilities Act (ADA) and other federal laws. Website accessibility has evolved to its current status as one of the hottest subjects of federal civil rights litigation. As with many compliance matters, website accessibility is complex, with rules and expectations shifting as more cases are filed and more courts weigh in on how to make websites and online content accessible to people with disabilities.

Federal courts, U.S. Department of Justice, and other federal agencies such as the Department of Education have clearly concluded that the ADA’s “broad and expansive nondiscrimination mandate reaches goods and services provided by covered entities on Web sites over the Internet”  75 Federal Register 43,460, 46,463.  See: National Association of the Deaf v. Netflix, 869 F. Supp. 2d 196, 200 (D. Mass. 2012) – excluding web-based services would “run afoul of the purposes of the ADA and would severely frustrate Congress’s intent that individuals with disabilities fully enjoy the goods, services, privileges, and advantages available indiscriminately to other members of the general public” and National Federation of the Blind v. Scribd, Inc., 2015 U.S. Dist. LEXIS 34213 *26 (D. Vt., 2015).

In October 2015, the American Council of the Blind and three blind federal government contractors settled their federal class action suit against the U.S. General Services Administration (GSA). The case alleged that GSA’s website was “inaccessible to visually impaired government contractors.” In the settlement, GSA agreed to make its website accessible to blind and visually impaired people.

The current onslaught of federal class action lawsuits alleging ADA violations because of organizations’ failure to maintain ADA compliant websites that are accessible to people with disabilities continues, with no end in sight. According to the New York Times, more than 400 ADA website accessibility federal class action lawsuits were filed nationwide between January and August, 2017. These cases have hit many types of organizations and companies – hospitals, doctors’ offices, retail businesses, hotels, restaurants, colleges and universities, public school districts, other local and state government entities, insurance companies, and banks.

Federal cases and enforcement against state and local governments for website accessibility discrimination have also increased. See: e.g., Innes v. The Board of Regents of the University of Maryland, (D. Md. 2015), 2015 WL 1210484.

In addition, McDonald’s, Kmart, Grubhub and home supply company Empire Today have all recently settled their own cases that alleged their websites and smartphone apps were not accessible to blind people.

These settlements are confidential, so the exact terms are unknown. However, all four cases called for the defendant companies to accommodate online people with visual disabilities. These cases all alleged that the companies’ websites violated the Americans with Disabilities Act.

One of the most significant website accessibility compliance events occurred in June 2017 when a federal court in Florida issued a decision in the first ever ADA website accessibility trial. The court ruled that the supermarket chain Winn-Dixie’s website was not accessible to people with disabilities and violated the ADA. The court focused on the website’s offering several services and programs, such as downloading coupons, refilling prescriptions, and finding Winn-Dixie stores that people with disabilities could not use. The court’s decision is being appealed.

In addition, analysis of federal court new case filings from 2015-2016 reveals that the number of website accessibility lawsuits filed across the United States increased dramatically in 2016 compared to the same period of time as little as three years ago, to number approximately 300 new cases filed between October 2015 and October 2016.

In addition to an increase in the number of website accessibility lawsuits, the allegations of federal disability discrimination have changed, becoming more involved and complex.

For example, Harvard, MIT, and the University of California/Berkeley were sued previously for website accessibility discrimination. However, these cases all focused mostly on the universities’ online course content that was alleged to be inaccessible to students with disabilities. The most recent suits against educational institutions, including Fordham University and Hofstra University focus on alleged website barriers that prevented disabled plaintiffs from obtaining information about enrollment. These cases illustrate the broader trend of plaintiffs moving above and beyond retail establishments to enforce ADA compliance on all entities with an online presence.

The increasing number of website accessibility lawsuits and the expanded targets for these suits are likely occurring for a simple reason – plaintiffs have experienced much success in recent court decisions that have found ADA violations on websites.

Although court decisions have some substantive differences, the clear trend is courts concluding that websites are covered by the ADA and websites that cannot be used by people with disabilities violate federal disability discrimination prohibitions.

All indications are that more and more website accessibility lawsuits and more and more complaints will be filed, as the next frontier in ADA liability continues expanding for the foreseeable future.