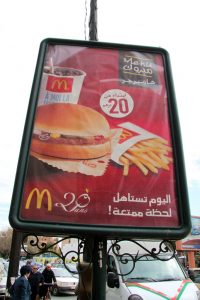 In this day and age there seems to be an obsession with combining two words to create a whole new word that is filled with grammatical errors and confusion. The word ‘glocalization’ might seem like one more example of that modern cliché, but in reality, it’s a word that’s worth knowing for anyone doing business in today’s global society.

The first thing that comes to mind when you see ‘glocalization’ is probably that somebody misspelled globalization. Most people know what globalization is — the idea that brands, businesses and people are constantly growing and interacting on an international or global level — and most understand how it affects their daily lives. Glocalization, on the other hand, is the idea that global business should be conducted while taking local conditions and customs into consideration.

Whether it’s the news we see and read daily or even something as simple as filling our cars up with fuel imported from another country, it’s almost impossible to go a day without feeling the impact of globalization. There is, however, another side of globalization that isn’t regarded in such a positive light. Negative impacts of globalization can occur when boards of directors and business people a world away make decisions to move into new markets based on trends and projections instead of the needs and customs of the people living in those markets.

Where there are some who may see this arm of globalization as a problem or conflict, this is also where glocalization comes in as the solution.

In short, glocalization is taking the globalization that is already underway and finding a way to make it positive for both parties — the businesses looking to reach a new demographic as well as the people that make up that demographic. The key phrase used when discussing glocalization is: “Think global, act local.”

One of the best examples of a company implementing a successful glocalization strategy is McDonald’s. Take a quick look at their corporate “Around the Globe” page. Their branding stays the same from region to region (“Think global”) while their menu and community involvement matches up with the customs of that region (“Act local”).

Glocalization for your business

Yes, McDonald’s has a multi-million dollar marketing budget and a team of brand managers from across the world, but the effects of globalization don’t just pertain to massive corporations. In fact, globalization almost works the opposite way for smaller companies, nonprofits, government agencies, or health care providers who have very specific local goals.

A fairly large company with a market extending across several states, for example, might do initial market research to find ways to increase sales. After collecting and analyzing data throughout the local area, though, they might find that the fastest-growing market share in their region are immigrants whose tastes and preferences differ entirely from the local demographics they usually serve. That’s just one example of a kind of reverse globalization where, rather than a company going global, they’re compelled to realign their local marketing techniques in order to cater to the global clientele living in their region.

One of the most effective ways to achieve that realignment is through investing in localization services for the company’s website. A company website is accessible worldwide, so it’s important to consider the site’s global appeal, even if the company’s target audience is largely local. After all, professionals working in today’s business landscape need to be aware of the fact that multiple different cultures often exist within the same region — why waste the opportunity to generate more leads by tailoring your web presence to the demographic groups in your area?