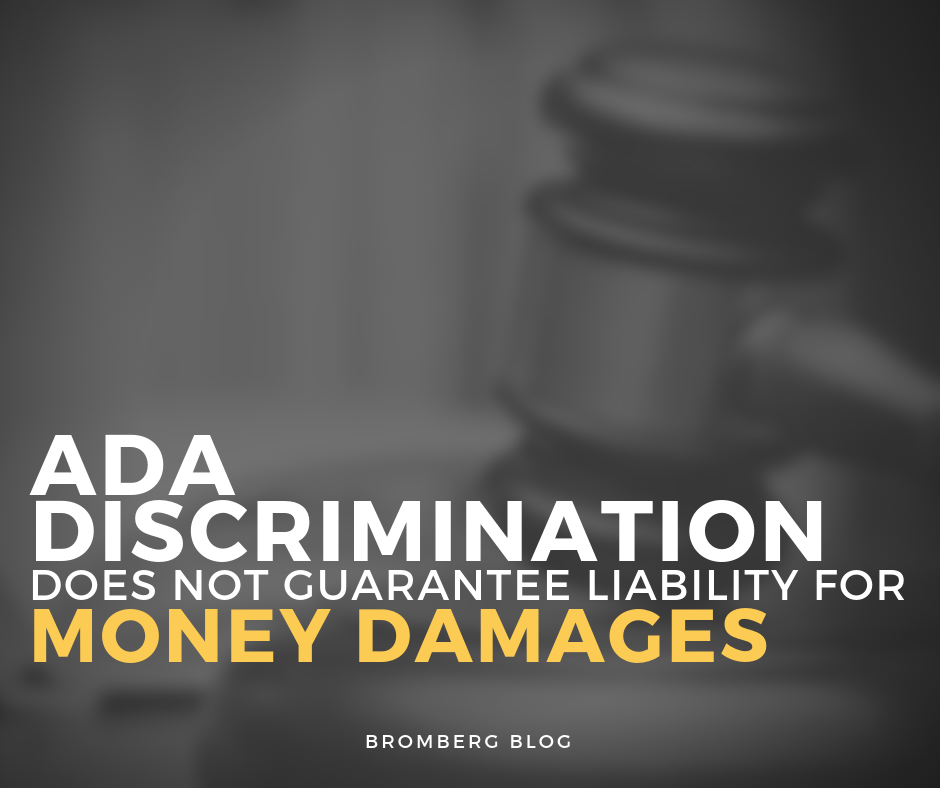 ADA Discrimination Does Not Guarantee Liability for Money Damages

In November 2018, a federal judge in Wisconsin dismissed an Americans with Disabilities Act discrimination case against Children’s Hospital of Wisconsin. The court decided that even if the hospital had discriminated against the deaf mother of two infant patients, as she claimed, she could recover no money damages because she had no evidence to satisfy the legal standard for monetary recovery. Without evidence to enable a damages award, the court granted the hospital’s request to dismiss the lawsuit.

Alissa Juech, plaintiff in this case, is deaf. In 2015 and 2017, she brought her two infant children to Children’s Hospital for treatment.

According to the court, Mrs. Juech’s complaint stated:

“Plaintiff Alissa Juech has been deaf since birth and communicates primarily through American Sign Language (ASL). On the morning of February 5, 2015, Juech took her approximately 3-month-old son, B.J., to the emergency department of Children’s Hospital of Wisconsin.

Juech’s mother arrived at the hospital at roughly the same time, and Juech asked her to request the hospital provide her with a sign language interpreter.

Two years later, in February of 2019, Juech returned to Children’s Hospital with her four-month-old daughter, A.J. The hospital provided her with an interpreter through VRI. Hospital staff obtained A.J.’s medical history from Juech, although Juech does not recall if it was done using the VRI (Video Remote Interpreting).

As the court described:

“Specifically, Juech alleges that the defendants “failed to provide her with the auxiliary aids and services required to enable effective communication during the hospitalizations of her two infant children in Children’s facilities.”

Does This Incident Qualify as ADA Discrimination?

The U.S. District Court for the Eastern District of Wisconsin first examined whether not providing an ASL interpreter when other effective communication methods are available is disability discrimination.

The court, citing multiple decisions of other federal courts and federal regulations, held that federal law does not require organizations to provide the communication method of a deaf person’s choice. Rather, the court ruled, there is no “per se” right to an in-person interpreter. As long as effective communication is achieved, there is no ADA discrimination.

“[The] Hospital is not necessarily required to provide whichever auxiliary aid a qualified person requests. (“Patients with disabilities are not entitled to the auxiliary aid of their choice unless it is necessary to ensure effective communication.”) … [T]here is no per se rule that [ASL] interpreters are necessary, and other accommodations are often sufficient.

Notwithstanding Juech’s preference for and expectation that Children’s Hospital provide her with an in-person interpreter at all times, it was not required to do so as long as it could provide effective alternative means of communicating with her.”

The court also rejected Juech’s argument that delays in VRI and in-person interpreter availability and temporary technological hiccups with communication devices such as VRI are illegal. Instead, the court recognized that technology is “imperfect” and cited the U.S. Department of Justice’s rules regulating VRI use as recognizing that temporary technical difficulties are not necessarily violations of the ADA.

As the court reasoned:

“The court rejects Juech’s implication that any temporary failure of or complication with the VRI amounts to discrimination. Technology is imperfect, and the Department of Justice undoubtedly appreciated as much when it adopted the relevant regulations approving VRI as a means for providing a qualified interpreter.

Delays and difficulties in initiating the VRI do not necessarily amount to discrimination. In approving the use of friends or family to facilitate communication under certain circumstances when an interpreter is not available, the Department of Justice’s regulations implicitly acknowledge that an interpreter might not be immediately available.

Given that it could be expected that it might take some time for an interpreter to arrive at the location where her services are needed… a delay in obtaining and starting up the VRI does not necessarily constitute discrimination.

… Nor does a finding of discrimination necessarily follow simply from the fact that a hospital tries to use an auxiliary aid that proves ineffective.

For example, a hospital may attempt to communicate through written notes only to find that the issue being discussed is too complex for written notes. That does not, in hindsight, render the attempt discriminatory. Only if the hospital failed to provide an alternative auxiliary aid once it became clear that the initial method of communication was ineffective might there be a claim for discrimination.”

How does this affect the final ruling?

Whether or not an organization provided “appropriate auxiliary aids” to communicate with deaf people is a “fact intensive exercise,” the court decided, and depends on the facts of each particular case, including the complexity of information exchanged, the length of the relevant conversation, and the conversation’s context.

In this case, to recover money for disability discrimination, Mrs. Juech had to prove that the hospital was “deliberately indifferent” to her communication needs or intentionally discriminatory because of her disability. The court held that “consistent and persistent” problems with the VRI or other communication methods must be present to enable an award of damages.

“At best, the evidence might support the conclusion that individual staff members encountered problems [with the VRI]. But there is no evidence that would allow a reasonable finder of fact to conclude that the staff members regarded the problems as anything other than isolated incidents. Even if they viewed the problems as recurring and substantial, Juech has presented no evidence that they passed those views on to the hospital administrators that Juech complains discriminated against her.

… Only if the hospital administrators were aware of the alleged problems with the VRI but demanded its use anyway could a reasonable finder of fact conclude that the defendants were deliberately indifferent. Juech has not presented evidence to support such a conclusion… The court concludes that Juech has failed to present sufficient evidence from which a reasonable finder of fact could conclude that any discrimination was the result of deliberate indifference.”

The court further declared that while there could be an ADA violation in this case, the court does not find that any such potential discrimination was intentional or “the result of deliberate indifference.”  Without such intent or indifference, no money damages for ADA discrimination are possible under federal law.

Disclosure: The author was the testifying ADA expert for Children’s Hospital in this case.