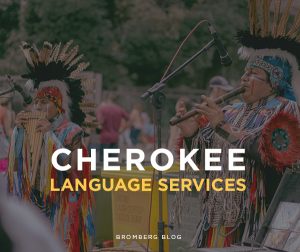 Today, we’re going to talk about Cherokee: a Native American language spoken by the Cherokee people, mainly in the U.S. states of Oklahoma and North Carolina. With only around 12,000 native speakers out of more than 300,000 tribal members, the language is classified  as “Definitely Endangered.” In other words, children are no longer learning the language as a mother tongue in their homes.

A bit of History

Up until the 1820s, the Cherokee language was a spoken language only and had suffered a severe downturn due to massive population decline, warfare, and influence from newly arrived European languages. It was in the 1820s that a writing system was first developed by a Cherokee silversmith called Sequoyah. It wasn’t an alphabet in the traditional sense but rather a “syllabary”; that is, a set of written symbols which represented the syllables that made up words. For the one used in modern Cherokee, there are 85 symbols in all (one less than that of Sequoyah’s which had 86). It took a lot of work to convince the Cherokee people to adopt this writing system but once they did, literacy rates soared to the point where more Cherokee people were literate in this new syllabary than Europeans were with the Latin alphabet.

In that same decade, thanks to the creation of this writing system, the Cherokee language had its own newspaper (albeit briefly) and over the course of the following decades, the stories of the Bible were gradually translated into Cherokee as well.

During the last decade Cherokee language has arrived on Apple’s iPhone and iPad, Microsoft Windows and Office, and in Google Fonts. The Cherokee Nation made substantial efforts for all this to happen. These were key factors for the survival of their language in the new millennium.

Why were Cherokee people interested in Apple’s products? They considered them a way to encourage their children and young members to use their native language. According to Cherokee Chief Chad Smith:

“The goal is to spread the use of the language among tech-savvy children in the digital age.”

Nowadays Cherokee people can use computer systems, professional software and social media in their native language. Before that, thanks to the invention of the Cherokee Syllabary, vast written documentation and literature in Cherokee was already available.

This is just the latest chapter of how the Cherokee language has been developing over the past years. All this would not have been possible without Sequoyah’s Syllabary the Cherokee people’s will and efforts to preserve their culture and the collaboration of big technology developers.

ᏗᏘᏲᎯᎯ (ditiyohihi) = Lawyer (lit. “he argues repeatedly and on purpose with a purpose”)

ᏗᏓᏂᏱᏍᎩ (didaniyisgi) = Policeman (lit. “the final catcher” or “he catches them finally and conclusively”)

Want to know more about languages and culture? Follow Bromberg’s language insights on Facebook and Instagram to get weekly updates. Also, if you need language assistance and services, feel free to contact us here.