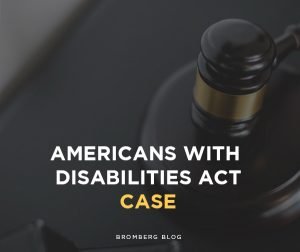 “You are in Contempt of Court,” Federal Judge Tells Cleveland Clinic in an Americans with Disabilities Act Case

In a stunning rebuke of the Cleveland Clinic, a federal judge recently decided the Clinic was “in contempt” of court for not complying with an Americans with Disabilities Act (ADA) settlement of effective communication allegations. On January 31, 2022, Judge Ruiz of the U.S. District Court for the Southern District of Florida, fined the well-known health system $1,000.00 per day until it complied with its settlement agreement.

Contempt fines went up to $15,000.00 until the Cleveland Clinic obeyed the Court and implemented the ADA compliance changes it had previously agreed to adopt. In the Court’s order, Judge Ruiz was outraged by the Clinic’s conduct.

“In the case of an especially recalcitrant and dilatory party refusing to comply with their settlement obligations, ensuring compliance can lead a court to rely on its inherent civil contempt power. That is the situation presented here…

[T]he Court will no longer tolerate Defendant’s contumacious disregard for this Court’s directives, which has unnecessarily delayed—for over a year—the completion of disability training to ensure that the staff of the Cleveland Clinic of Florida know how to communicate with the hearing-impaired…

[T]he Court finds it impossible that a health system entrusted with the care of millions of patients on an annual basis, and with revenues exceeding $10 Billion a year is incapable of showing its employees a 15-minute video to help ensure that deaf patients are treated equitably when presenting at one of their facilities. Due to the sheer size and capabilities of Defendant [Cleveland Clinic] as a corporate entity, the Court finds that a $1,000.00 daily fine is a reasonable amount “to coerce [Defendant] to comply” with the parties’ Settlement Agreement.”

Case Begins in 2019 – Video Remote Interpreting is Not Working

This case began in 2019 when Linda Rose Adams, who is hard of hearing and can communicate through American Sign Language, found herself staying overnight at a Cleveland Clinic facility in Florida. She went to the facility because she was not feeling well, NBC Miami reported. But she was unprepared for a multiple day hospital stay.

Rose said she stayed for what she described as frightening six days at the Cleveland Clinic with no idea what was being said because they didn’t provide a sign language interpreter, even though she said she repeatedly asked for one.

Many times, many times [she asked for an interpreter]. The second day, I was screaming, screaming. I wanted to go home. I don’t want to be there, she told NBC 6. They were giving me drugs that I was allergic to. They were doing all the testing. I didn’t know what they were doing.

I felt like a dog—more like a rat—a dog. You don’t talk to a dog. That’s what I felt like. I was told to be quiet. You’re bothering the other patients,” she said.

Following her hospitalization, Ms. Rose Adams sued the Cleveland Clinic in federal court in the Southern District of Florida claiming it violated the Americans with Disabilities Act (ADA).  Her complaint alleged that the Clinic’s attempt to use Video Remote Interpreting to communicate with her was unsuccessful because the hospital’s computer and VRI program did not function properly.

“My condition got worse. I didn’t get better. I got worse. I was thinking the Cleveland Clinic was supposed to be the number one hospital for my condition, but they did nothing for me,” Rose told NBC Miami.

In November 2020, Ms. Rose Adams and the Cleveland Clinic resolved her lawsuit and signed a settlement agreement. In the settlement, Cleveland Clinic agreed it would provide required ADA training to all of its patient care staff. The Clinic agreed to have the training done by an “individual knowledgeable about effective communication with the deaf and that the training module was not mutually agreed to by the parties,”

No Training – Clinic is in Contempt of Court

However, Judge Ruiz decided the Clinic had not given the required training.

“Both required prongs for a finding of civil contempt are present here. First, there is ‘clear and convincing evidence that the alleged contemnor has violated an outstanding court order.’ Specifically, Mr. Rosengarten [Cleveland Clinic’s lawyer] has repeatedly admitted that [Cleveland Clinic] has failed to comply with the Settlement Agreement—in two status reports and at the Hearing. And second, Defendant has failed to show that it ‘has made in good faith all reasonable efforts to meet the terms of the court order[,]’ because no legitimate excuse has been given for the extraordinary delay… Absent a brief delay due to defense counsel contracting COVID-19 in December 2021, 8 months after the first deadline to complete video training, Mr. Rosengarten has provided no excuse for his client’s blatant failure to comply with this Court’s orders and effectuate the terms of the Settlement Agreement.”

“To make matters worse, Mr. Rosengarten, on behalf of Defendant, has continuously run afoul of court-imposed deadlines, misrepresented his interactions with Plaintiff’s counsel, and most recently attempted to engage in an impermissible ex parte communication with the Court. The Court explicitly advised Mr. Rosengarten that a coercive daily fine would be imposed upon a finding of contempt should Defendant fail to reach an agreement with opposing counsel. That warning has gone entirely unheeded.”

This is a particularly egregious case, with a large contempt fine against a well-known health system. The situation was made worse by the Clinic’s own recalcitrance and outright refusal over a one-year period to provide the training required by its settlement agreement. Compliant ADA policies, effective ADA training, more responsive Clinic leadership, and a lawyer who did not “run afoul of court-imposed deadlines,” all would have led to a different result in this ADA case. As for Linda Rose Adams, she decided to switch to a different health care provider. According to NBC Miami, she is now feeling better.