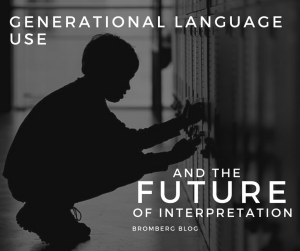 Generational Language Use & the Future of Interpretation

Speaking another language requires its own unique skill set. Like any aptitude, foreign language skills need to be practiced regularly to retain their sharpness and vitality. The more you use your language, the better your ability to retain and improve proficiency.

But what happens if you stop?

“Pew Research surveys find that the second generations of both groups are much more likely than the immigrants to speak English; to have friends and spouses outside their ethnic or racial group, to say their group gets along well with others, and to think of themselves as a “typical American.

“Many first-generation Chinese American children are initially exposed to the Chinese language by their parents in the home. However, because Chinese American children must learn to communicate in English in order to assimilate into mainstream American society, they are faced with a distinct challenge. There is the social pressure to speak English in their daily life that competes with yet another social pressure to retain their native language and preserve their heritage.”

This social pressure to assimilate and its effect on language use continues today, with possibly substantial negative implications for interpreters and language services providers.

As USA Today reports, “Spanish proficiency drops while English proficiency rises for many young Latinos. As a result, a command of the language decreases with each Latino generation in the U.S. For example, about 57 percent of Latinos older than 69 are proficient in Spanish. Fewer than 50 percent of Boomer and Generation X Latinos speak the language comfortably, and approximately 25 percent of Hispanic Millennial adults know the language well…

Younger Latinos are gravitating more toward English than Spanish, according to a Pew study. About 88 percent of Latinos ages 5 to 17 in 2014 said they either speak only English at home or speak English “very well,” compared with 73 percent in 2000. Among Latinos ages 18 to 33, the number has increased from 59 percent to 76 percent.” Spanish fluency in the U.S. decreases with each generation: USA Today Hispanic Living Magazine (September 10, 2017)

The continued push and pressure to assimilate into Anglo-American culture and language may implicate succeeding generations of Latinos ability to speak Spanish fluently. Indeed, this possible decline in proficiency can likely be found across all language groups. In effect, the notion of becoming more “American,” and increasing employment prospects through English language mastery, may erode overall language fluency and reduce the pool of fluent speakers who could become future interpreters.

According to USA Today:

“Mark Hugo Lopez, director of Hispanic research for Pew, says English is gaining ground over Spanish among U.S. Latinos for many reasons. Immigration, especially from Mexico, has slowed. U.S. births are now a bigger driver of Latino population growth than immigration. Increased intermarriage between Latinos and non-Latinos also is a factor. “All three are slowly changing the share of the Hispanic population that speaks only English at home,” he says.

Another reason is that for many immigrants from Latin America, lacking a command of English has held them back in the labor market, so they make learning English a priority for their children. “They highly value English, and when it comes at the expense of maintaining Spanish, they may value it too much,” says Patricia Gándara, a research professor at UCLA.”

Native language knowledge and use may take second place to different, non-linguistic cultural affinities. Indeed, as USA Today opines, future generations of Latinos may place a greater priority on cultural ties and traditions than speaking their ancestral language.

“We may be forging a new identity that is not as tied to the Spanish language as in other parts of the world,” says Lopez. “Many Hispanics who are of those later generations may not be fluent in Spanish, yet they strongly identify with their ancestry and background.”

How Can This Affect Interpreters?

If this supposition comes true, we may face the future prospect of fewer people being available who are fluent and proficient in given languages who can also be interpreters. The related implications for the language services industry could be significant. Analyzing and “interpreting” these potential implications will await the verdict of future demographic and cultural developments.