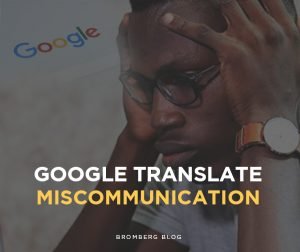 Google Translate is seemingly everywhere – on phones, I-pads, apps, laptops – everything that has an Internet connection. While the use of Google Translate and other online translation devices is growing, understanding of their limitations is not. Indeed, the assumption that online translation sites and apps are as accurate as their omnipresence is a fraught one and can have serious consequences, as a federal judge recently decided.

On October 1, 2021, a federal court ruled that Google Translate is not accurate enough for a police officer to use in asking a motorist to consent to a search of her car. In this particular case, the court even found some of the online translations to be “non-sensical.” Although the court invalidated the defendant’s consent for police to search her car, the court upheld the search as not requiring consent because the police officer had probable cause to conduct a search without the driver’s agreement.

“The Court is not convinced that Google Translate accurately translated [police officer’s] request for consent into Spanish.”

“The Court is not convinced that Google Translate accurately translated Conrad’s request for consent into Spanish. The Government bears the burden of proof, but failed to introduce any evidence showing that the word “registrar” actually means “to search.”

Precision is important, particularly in this context, and the Court believes that more was needed to establish the accuracy of Google Translate…

It seems… that Google Translate was unable to adequately translate the word Ramirez-Mendoza used to describe her boyfriend’s occupation. The FBI linguist translated her as stating “trailer driver, ” but Google Translate interpreted this as “trailer.”

Google Translate produced several other Spanish-to-English mistranslations. One occurred when Conrad asked if Ramirez-Mendoza planned to drive back to California with her boyfriend. Google Translate interpreted her as responding “[b]ecause the one in New York goes Kentucky from fifth and leaves Texas.”

Another was when Ramirez-Mendoza’s answer to the question of what hotels she had stayed in was translated into English as “[d]on’t let and grab another one in Indiana . . . and the other-other hotel in Indiana.” A minor word-level mistranslation appears to have happened when Google Translate interpreted Ramirez-Mendoza as saying she planned to “mark” her boyfriend…

The app also produced several English-to-Spanish mistranslations. Though more difficult to capture without a verified transcript, these mistranslations are evidenced by instances where Ramirez-Mendoza gave strange answers in response to or needed clarifications of Conrad’s inquiries.

Language Barrier on a Pennsylvania Highway

In this case, Pennsylvania State Police Officer Conrad stopped a car  driven by Brenda Ramirez-Mendoza on a Pennsylvania highway. Conrad chose to stop the car because Ramirez-Mendoza was driving above the speed limit and he suspected that her vehicle’s window tints were illegal. Ramirez-Mendoza’s primary language is Spanish, which Conrad does not speak. The two of them communicated primarily in their own respective languages.

When Conrad stopped Ramirez-Mendoza, he communicated with her in English without the help of Google Translate or any other linguistic aid. Conrad asked for her license and registration, whether the car was hers, and about her travel plans. Conrad stated that he does not speak Spanish, and Ramirez-Mendoza attempted to reformulate her answer in English by saying: according to the transcript of their conversation: “[u]m, is from my boyfriend, because the 14th, the Friday, so, it’s for the, uh, present.”

Conrad then asked Ramirez-Mendoza to exit the car and stand by the passenger window of his patrol vehicle. He began using Google Translate, a translation app on his phone. Their process of communication from this point on went like this: Conrad would speak English into his phone, the app would translate his statement into Spanish, and then verbalize the translation and display it on Conrad’s phone. The same process occurred, but in reverse, when Ramirez-Mendoza spoke into the phone. Conrad held the phone at all times.

Because Conrad does not speak or understand Spanish, he did not and could not confirm whether Google Translate accurately interpreted and articulated what he was saying. In court testimony, Conrad admitted that his department uses consent to search forms but he did not consider using one or checking whether one was available in his car. Nor did Conrad consider whether a Spanish-speaking interpreter was available to assist.

As the traffic stop proceeded, Conrad asked Ramirez-Mendoza if he could search her car. The court described what happened next:

“Google Translate converted this into Spanish, and from the video recording, it appears that the word “registrar” was used in place of the phrase “to search.” [An] FBI linguist translated the app’s Spanish translation into the statement: “I like to search the car to make sure that it is all right.” Again, however, the Government did not offer any testimony to verify the accuracy of this translation…

Ramirez-Mendoza then responded “uh-huh” and nodded her head. Conrad… proceeded to search the vehicle. In the car, he found a large package of fentanyl. Ramirez-Mendoza testified that she believed that Conrad had meant “I like check the cars, revise the cars” and that she did not understand this to mean that he intended to search her vehicle.”

“An alarming capacity for miscommunication and error.”

“Another factor, of particular importance here, is the existence of a language barrier.

An officer’s inability to converse with a suspect in a common tongue poses special problems where the officer attempts to solicit the suspect’s consent to a search. This is because difficulties in communication tend to make it harder to determine whether consent was actually provided, and if it was, whether it was voluntarily given.

Nevertheless, voluntary consent has been found where the evidence demonstrates that the suspect signed a foreign-language consent form, the suspect could speak or understand English, or the police officer could communicate reasonably well with the suspect in her native language…

While the transcript tends to prove that Ramirez-Mendoza knew that Conrad intended to search her car, the translation …. undercut[s] the Government’s case as the transcript shows that Google Translate revised Conrad’s question into a statement. As a statement that one “like[s] to search” is significantly more coercive than a request, this alone would not be enough to establish voluntary consent. The transcript thus presents strong evidence of coercion which would suggest that Ramirez-Mendoza felt unable to refuse given Conrad’s declaration…

The Court declines to infer that Google Translate accurately translated and communicated Conrad’s request to search Ramirez-Mendoza’s vehicle solely because it may work well generally.”

One Translation Failure is One Too Many

Indeed, the court went further. While finding that Google Translate is a “useful tool”, the court also concluded that the online translation service has “an alarming capacity for miscommunication and error.”

The court essentially consigned the use of Google Translate to facilitating “basic communication” while also not being an adequate method for more involved, linguistically complex conversations such as protecting the constitutional rights of a suspect in a police situation.

One of the key takeaways from this case is that over reliance on Google Translate and similar products behind enabling “basic communication” between people speaking different languages is highly inadvisable. Such misuse can have significant consequences, resulting in substantial translation mistakes leading to regrettably predictable situations that flow from miscommunications and misunderstandings due to a language barrier.

Need Language Solutions? Over 20 years of breaking down language and cultural barriers. Contact us Today!