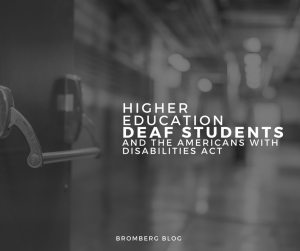 Higher Education, Deaf Students, and the Americans with Disabilities Act

For a long time, healthcare seemed to be the target of choice for lawsuits claiming disability discrimination because sign language interpreters were not provided to deaf patients.  While healthcare continues to be a central locus for disability discrimination claims, educational institutions, public secondary schools, colleges, and universities are more and more finding themselves defending allegations that they discriminate against people with disabilities.

Such cases involve many different Americans with Disabilities Act (ADA) claims –inaccessible school websites, inaccessible physical facilities, such as doorways that are too narrow, and classroom instruction and school programs that are inaccessible because sign language interpreters were not provided to deaf and hard of hearing students.

One of the most recent 2018 cases is in Louisiana where students of Delgado Community College have sued, claiming the school did not provide them with requested sign language interpreters, resulting in the school’s programs and activities being inaccessible for them because of their hearing disability.

According to the Lafayette (LA) Daily Advertiser:

“Deaf students have sued Louisiana’s community college system, saying their grades suffered or they lost financial aid because they could not get interpreters or other accommodation for their disability.

According to the lawsuit, [two students] complained to a Delgado official about difficulty getting American Sign Language interpreters, but the official was unable to ensure that interpreters came to their classes.

According to the lawsuit, [one student] was never able to get an interpreter to help with the financial aid office, and dropped two of his three courses in early 2017 not realizing this would cost him his scholarship. “He did not know this because he did not receive interpreters to communicate with the financial aid staff,” according to the lawsuit.

He was able to get classroom interpreters until early 2017, but those who had been interpreting his remaining course in digital circuits stopped showing up in March 2017.

Smith was able to get adequate interpreters for two of the five courses she was taking in January 2017, but not for three others. “Ms. Smith also intends to prove at trial that the lack of sufficient accommodations has caused her grades to suffer,” the lawsuit states.”

The two college students, Lee Em Bruce and Ronneka Smith, allege that the school did provide them with sign language interpreters up to a point in time in 2017. However, they claim, the school eventually stopped accommodating their ADA communication requests.

Without interpreters, the students allege, they were unable to participate in class and understand class discussion and materials. In addition, Mr. Bruce alleges that the school’s failure to provide sign language interpreters caused him to withdraw from several classes. He claims that dropping these classes resulted in the loss of his scholarship, a possibility he allegedly did not understand because of communication difficulties with the school administrators.

In May 2018, plaintiffs filed a new complaint in federal court against Louisiana Community and Technical Colleges and the System’s president. In the new complaint, the students allege:

Throughout his time at Delgado, however, Mr. Bruce had difficulty understanding the terms, conditions, and requirements of financial aid. Navigating the requirements to obtain financial aid is commonly known to be a difficult and confusing process.

In approximately March of 2017, the interpreters for his Digital Circuits course stopped coming to class. Mr. Bruce complained to Gretchen Peoples at Delgado, but she did not ensure that the interpreters would come to class.

In April of 2017, Mr. Bruce received an interpreter on only one occasion.

Despite not getting sufficient accommodations and interpreters, Mr. Bruce never missed a class and attempted to communicate via passing handwritten notes. Because Mr. Bruce dropped several classes, he lost his financial aid. With financial aid, Mr. Bruce does not have to pay for his courses.

Without aid, Mr. Bruce has to pay $3,000.00 for tuition… Mr. Bruce would have never dropped his courses had he known that dropping courses would have ended his financial aid. But he did not know this because he did not receive interpreters to communicate with the financial aid staff.”

This case is in the very early stages. As the lawsuit proceeds and each side produces and discovers more information, we will learn more about the students’ allegations and experiences and the school’s defenses and explanations.

As a public state college, Delgado Community College and Louisiana’s community and technical colleges are covered by ADA Title II.

According to the U.S. Department of Justice’s ADA Effective Communications Guidance: “When choosing an aid or service, [ADA] Title II entities are required to give primary consideration to the choice of aid or service requested by the person who has a communication disability. The state or local government must honor the person’s choice, unless it can demonstrate that another equally effective means of communication is available…”

Justice’s Guidance and federal law outline one of the key considerations here, one that regularly faces public schools across the United States: Honoring the effective communication requests sign language interpreters and needs of deaf and hard of hearing students. This case should help all public schools determine the communication needs of students with disabilities and then decide how best to fill them.