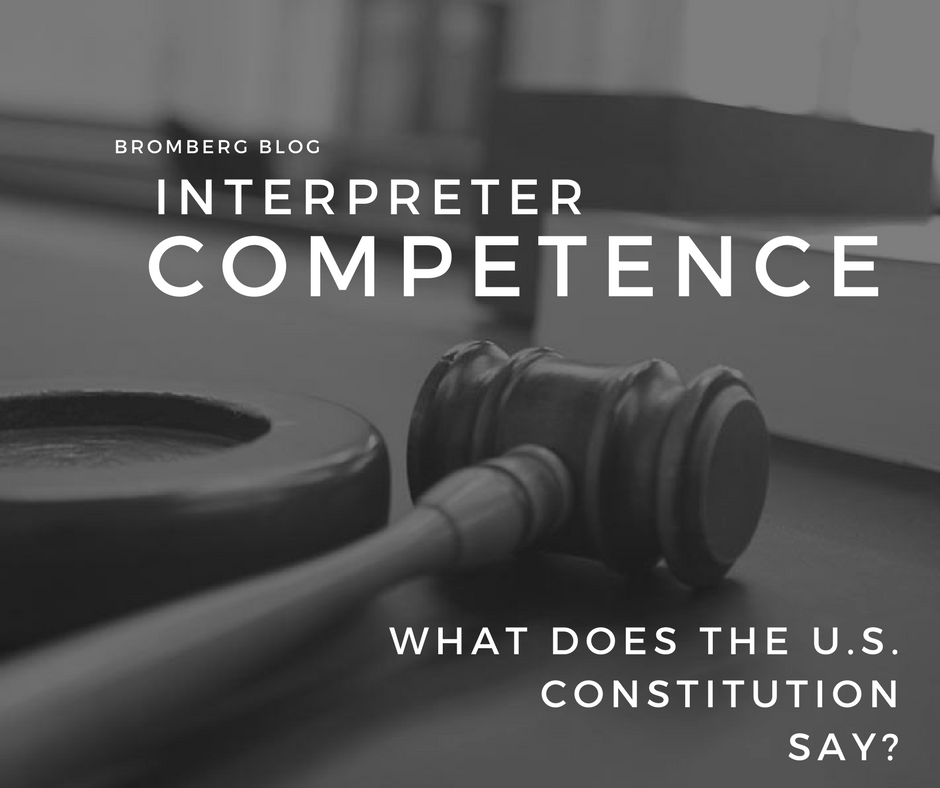 Interpreter Competence: What Does the U.S. Constitution Say?

Court interpreters must take an oath before they interpret in the courtroom. The content and wording of courtroom oaths can vary by state and also differ in federal courts.

However, court interpreter oaths likely contain commitments such as:

“[The interpreter] will repeat the statements of the person being examined to the court. . . to the best of the interpreter’s skill and judgment.

[The interpreter] shall interpret or translate the material thoroughly and precisely, adding or omitting nothing, and stating as nearly as possible what has been stated in the language of the speaker.

When a language interpreter has any reservation about [his or her] ability to satisfy an assignment competently, the interpreter shall immediately convey that reservation to the parties and to the court.”

The above requirements come from the State of Washington and are contained both in state laws and state court rules that regulate courtroom proceedings and the testimony of interpreters. These requirements are also at the center of Jaspal Singh Gill’s attempt to overturn his murder conviction.

The Trial of Jaspal Gill

Mr. Gill appealed his conviction on several grounds, one of which is the competence of a Punjabi-speaking courtroom interpreter. On August 14, 2017, the Washington Court of Appeals affirmed Mr. Gill’s murder conviction.

In this case, the appeals court was faced with this issue: whether an interpreter’s violation of her oath and her duties to interpret “thoroughly and precisely, adding or omitting nothing” violated the constitutional rights of Mr. Gill, who was convicted of murdering his ex-wife?

The Punjabi interpreter on the second day of Mr. Gill’s trial admitted to having difficulty understanding one of the Punjabi speaking witnesses in Mr. Gill’s defense.

The following is an exchange between the interpreter and witness (Grewel) cited by the Court of Appeals:

“[Grewal]: By the way, I have a question. It looks like I’m translating literally wrong way. Every time I’m having kind of issue. I say something else, every time something else. You know? I don’t want to speak very good English, but I try to understand most of it. It looks like it’s interpreting a little bit different way. I’m sorry. I’m misunderstanding you or you’re understanding me.

[Interpreter]: I’m a trained interpreter, and the language is my native language. But if you speak slowly, and don’t say it again, you know, just once.

[State]: Mr. Grewal, let me ask you to do this for now. Please break up what you’re saying into small bits so that Madam Interpreter can properly interpret, just like how I’m breaking up my questions.”

Additional issues about the interpreter’s competence arose during the second and third days of the trial.

According to the Court of Appeals:

The interpreter testified about “… her professional experience and that she accurately and truthfully interpreted questions from English to Punjabi.” But she also admitted that Grewal “add[ed] extra incoherent words to a sentence” and that she “… paraphrased his testimony rather than interpret each word, giving the important thing, . . . the gist. . . .”

The trial court judge ordered the interpreter to interpret “each and every word… whether or not it ma[de] sense. . . to [her], or whether [she] believe[d] [it] [wa]s an incomplete answer or sentence. . . .” For the rest of the third day and all of the fourth day of trial, there were no additional concerns about the interpreter.

There seems to be no doubt that the interpreter violated her oath and Washington requirements for an interpreter. For example, the interpreter admitted that she did not “interpret or translate the material thoroughly and precisely, adding or omitting nothing.” She failed, as the Court of Appeals decided, to “repeat the statements of the person being examined.”

Okay then – Seems like a slam dunk. The interpreter clearly did not interpret as she swore she would and as Washington law requires. So, the interpreter did not, by her own testimony, interpret “accurately and truthfully.”

Inaccurate interpretation of a defense witness in a trial where the defendant is convicted of murder would seem to be a big deal, implicating the defendant’s rights to due process and fair trial under the U.S. Constitution.

Or is it a big deal? Well, the Court of Appeals said no, it’s not.

The Court decided that the discrepancies between what the interpreter interpreted and what the witness said were not “material,” or central to Gill’s defense. Gill claimed he acted in self-defense when he killed his ex-wife and was not guilty of murder.

What does the Constitution Say?

The U.S. Constitution’s “… Sixth and Fourteenth Amendments guarantee criminal defendants the right to a fair trial. Washington’s State Constitution provides a similar safeguard. Due process requires that a defendant have a meaningful opportunity to present a complete defense. This includes the right to offer witness testimony. A defendant’s right to an interpreter is based on the Sixth Amendment right to confront witnesses and “the right inherent in a fair trial to be present at one’s own trial.'”

These rights do not require that a courtroom interpreter interpret every word correctly and make no mistakes. Indeed, human beings cannot “get it right” 100% of the time, all the time.

The Constitution effectively anticipates and tolerates interpreter courtroom mistakes, at least certain mistakes. In a criminal trial, as long as any interpretation errors or inaccuracies are “immaterial,” and not important to the defendant’s criminal defense, they are not unconstitutional.

A murder defendant challenging his conviction must prove that an interpreter’s use of the word “phone” to describe “two remotes” is key to his claim of innocence. If he cannot, the defendant must come up with something else to exonerate himself, according to the Washington Court of appeals.