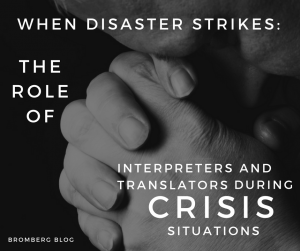 The Role of Translators and Interpreters during Crisis Situations

The main function of translators and interpreters is to bridge the gap caused by language barriers through communication. But when the situation is especially urgent, such as during national emergencies or on the battlefield, the role of interpreters and translators cannot be overstated. Let’s take a look at specific crisis situations where interpreters are needed, how they aid communication in emergencies, and some of the risks involved.

How do Interpreters Aid in Communication during Crisis

During times of crisis, interpreters and translators are relied on to aid in communications with the community. As the situation is unfolding, it is important for translators and interpreters to communicate both accurately and timely as they can affect how people respond to the message.

Oftentimes, in situations where many people are at risk, translators and interpreters will work in conjunction with first responders to aid in Public Service Announcements: interpreters may provide interpreting of pertinent information at press conferences and other events, while translators would feverishly work on delivering written content in the top volume languages of the region.

Before Hurricane Irma hit the Florida coast, Florida Governor Rick Scott was tasked with issuing warnings about the impeding storm and informing residents of the evacuation orders that were in place for their safety. Standing alongside Governor Scott was Sam Harris, an American Sign Language (ASL) interpreter. The interpreter communicated Scott’s urgent and forceful language using expressive body language to highlight the severity of the message; effectively communicating with members of the Deaf and Hard of Hearing community.

For verbal communications, interpreters are relied on heavily to help spread the message. However, when written messages need to be communicated, translators step in to bridge the language barrier. A translator’s role in crisis situations is to aid in the translation of legal documents, warnings, and written PSA’s. Often times, interpreters and event translators may be tough to find during crisis situations, especially when dealing with rare languages, or languages of lesser diffusion, as they are also called. Think about it: they are also often residents of the regions being impacted and have to evacuate along with everyone else. To solve this, video remote interpreting or telephonic interpreting may be used.

When residents of Nepal were hit by severe earthquakes in 2015, translators offered their services to aid in translating 500 terms into Nepali, Newari, and Hindi for the local residents. In addition to this, they also translated and distributed first aid documents from English to Nepali. By providing their services, translators contribute to successful relief missions and aid to the community.

But what if the crisis is not a natural disaster, but rather a man made one in foreign territory? For many military interpreters, they are faced with the challenges of wartime interpreting. This specialized form is used when communication needs to be established through the locals and troops or through friendly or enemy forces where a language barrier exists.

Generally, the tasks and purpose of these interpreters is the same as in other situations. However, often times the role of an interpreter is also to be a cultural mediator. There is a story of a Dutch interpreter in Afghanistan who had to speak for the actions of Dutch soldiers who disrespected the Quran. The interpreter made the soldiers promise they wouldn’t behave recklessly in the future; much to the appeasement of the Afghan troops. A more serious confrontation was avoided thanks to the mediation of the interpreter.

Risks interpreters are exposed to during crisis situations

There are many risks that interpreters face during crisis situations however. Due to the nature of the job, they are working with first responders and thus may face the risk of vicarious trauma. Interpreters may regularly be exposed to the pain and suffering of others. This high stress may cause secondary trauma which can impact the interpreter’s personal and professional life after the crisis. Interpreters in healthcare situations may be faced with working with a client whose personal family crisis’ may affect them mentally over time. Imagine the heartbreaking task of interpreting for someone and having to notify them that a loved one is gravely ill or dying.

Wartime interpreters are faced with the mental trauma of war while also faced with the risk of losing their lives. Simply being in the same vicinity of the targeted troops makes high risk situations for wartime interpreters as they may face retaliation from enemy forces while on the battlefield and after the war. For example, take the case of Sakhidad Afghan, an Afghan interpreter for the US Military. While waiting for his U.S. special visa for at-risk military translators, he was kidnapped and executed by enemy forces.

Clip provided from Afghan Translators: Out of Hiding by Al Jazeera 2016

Interpreters and translators both are essential in aid of the communication process during everyday language challenges and especially in crisis situations. Professional translators and interpreters aid in the crisis communication process by providing language access for Limited English Proficient and Deaf and Hard of Hearing community members, who so often are under served.

The importance of a qualified interpreter delivering the information correctly is crucial, as an unqualified ad hoc person, who may not understand the subtleties of the language, does not help the community. While acting as both a mediator between cultures and a bridge between languages, the services they provide in crisis situations can often be the difference between life and death.

**At Bromberg, our team of highly trained interpreters and translators are ready to help with your communication needs. Be sure to contact us for any language services or for a quote on your next translation project.