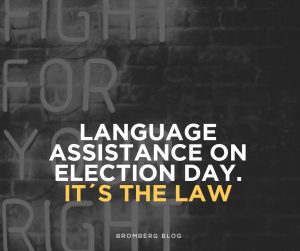 Election 2020 is finally over. States are completing all requested recounts. Counties and states are certifying their election results. All along the way, many election officials and poll workers performed herculean feats to administer successfully the highest turnout election in the United States since 1908, with all this election’s attendant challenges and stresses.

Elections in the United States must comply with federal and state laws. Federal law, under our Constitution, have supremacy, and effectively override state laws whenever the two are in conflict, such as when state laws are more restrictive than what federal laws mandate.

Such conflict arose on Election Day in Hamtramck, Michigan, a small city just outside Detroit. There, a voter sought Arabic-language assistance to vote. The voter requested help from a polling place observer or challenger who was not an official poll worker.

In response, according to WDET and WMUK, the Hamtramck city clerk threatened to remove the poll challenger who was assisting the Arabic-speaking voter.

According to Michigan election law, poll challengers are not authorized to approach voters or talk directly to voters for any reason. However, here is where the conflict arises.

Section 208 is often misunderstood by local and state election officials, potentially as was true on Election Day 2020 in Hamtramck.  The Voting Rights Act is unequivocal – voting assistance cannot be denied to any voter who is LEP, or limited English proficient. LEP voters can be assisted by anyone they choose, other than the voter’s employer or union representative. This assistance right is absolute and cannot be limited.

In 2016, a federal court in Texas tossed out an entire section of the state’s election code that conflicted with Section 208 of the Voting Rights Act in a case involving an LEP voter who was born in India.

As the Court recounted:

Mallika Das (“Ms. Das”) was born in India and moved to the United States in the mid-1990s. She was an American citizen and a registered voter of Williamson County, Texas. On October 31, 2014, she went to vote in Williamson County. Because she is limited-English proficient and has found it difficult to vote in the past, she brought her son, Saurabh Das (“Saurabh” or “Mr. Das”), to assist her.

The poll official then asked whether Mr. Das was a registered voter in Williamson County. Mr. Das answered truthfully that he was not—he is registered to vote in neighboring Travis County. The poll officials “had a discussion amongst themselves” and “decided relatively quickly that they wouldn’t allow [him] to translate.

According to the poll official, Mr. Das could not translate for his mother because he was not registered to vote in Williamson County. Ms. Das proceeded to vote without Mr. Das’s assistance.”

At the time of this case, Texas election law limited who could assist an LEP voter by requiring the interpreter assistor to be a “registered voter of the county in which the voter needing the interpreter resides.” However, the federal Voting Rights Act does not include such a limitation.

In striking down the relevant parts of the state election code for violating the Voting Rights Act, the federal court held:

“To remedy … disenfranchisement, Congress added the provision at issue in this case, Section 208. Section 208 gives voters who are unable to read or write English the right to be assisted by persons of their choice. 52 U.S.C. § 10508. The goal is to afford blind, disabled, and limited-English proficient voters “the same opportunity to vote enjoyed by all citizens.” (S. Rep. 97-417 (1982)…

But the right “includes” the voting booth; it does not exclude all else. In adding Section 208, Congress recognized that voting is a process. Hence states “could not deny the assistance at some stages of the voting process during which assistance was needed…

… And the [Texas Election Code] … by arbitrarily requiring the interpreter to be registered to vote in the county where assistance is being sought, flatly contradict[s] Section 208…

“Unlike other provisions of the VRA Section 208 does not impose an affirmative obligation on states. It operates instead as a negative obligation—states must not limit voters’ right to assistance by a person of their choice.” OCA-Greater Houston v. State of Texas (U.S. District Court for the Western District of Texas, 2016).

The Legacy of Mallika Das

Sadly, Ms. Das passed away before the Court decision. She did not live to see her federal right to a language assistor of her choice be strongly confirmed in a landmark federal court ruling.

But the potency of her cause continues. The Das case reveals the important role of language access and assistance in elections throughout the voting process. This role includes in-person oral language assistance at the polling places plus translated ballots and “voting notices, forms, instructions, assistance, or other materials or information relating to the electoral process, including ballots.” § 10503(c). The VRA defines each of these—the notices, forms, and assistance—as “voting materials.” Id. §10503(b)(3)(A). OCA-Greater Houston v. State of Texas (U.S. District Court for the Western District of Texas, 2016)

With the looming release in 2021 of 2020 Census date plus new Voting Rights Act language access determinations, spoken and written language assistance will continue to be crucial federal requirements for elections across America. So, the next time you know of a citizen who is LEP or is disabled and needs assistance to participate in the voting process, tell them the success story of Mallika Das.