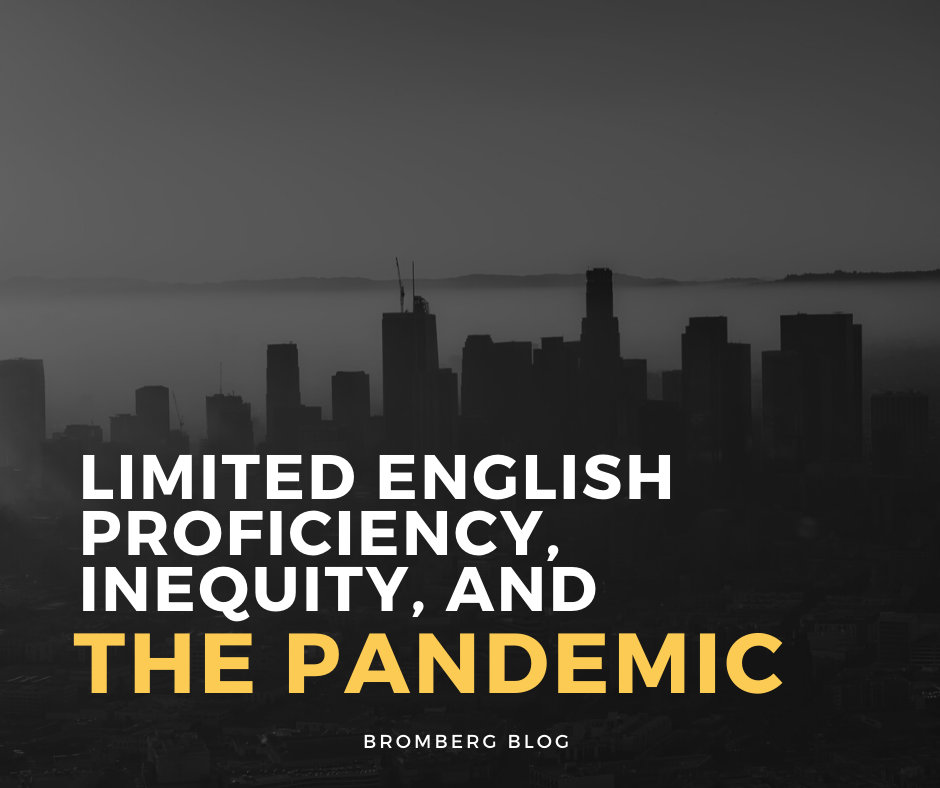 One can take for granted being able to understand the plethora of government, healthcare, and other vital information that we receive daily. That is just in normal times. But what about understanding such information in an emergency, in the pandemic in which we are living, if someone cannot read, speak or understand English?

Emergencies often heighten society’s social and demographic disparities and inequities. Low-income communities, people with limited English proficiency, and communities with limited easy-access to government and health resources are on the front lines of needing to obtain quick, simple to understand information and the access that they need to safeguard their health and safety.

Here are excerpts from three stories about how these communities are facing the coronavirus pandemic.

With unemployment rates soaring past 10 million nationally, the need for easy to understand information to access unemployment benefits becomes even more crucial. But in Massachusetts, limited English proficient people are struggling to learn how to access the benefits to which they are entitled.

“Massachusetts took a hit after Gov. Charlie Baker declared a state of emergency over the coronavirus pandemic. The governor banned all dine-in services at restaurants, shutting down bars and limiting restaurants to take-out and delivery orders in hopes of stemming the spread of the highly contagious coronavirus.

The next day, the state received almost 20,000 unemployment claims— more than it received throughout all of February. Foreign-born workers joined thousands in filing unemployment claims with the state during the coronavirus pandemic only to face a crucial barrier: the online portal is only available in English.

[A]ttorneys, community organizers and advocates that offer multilingual services say the surge in unemployment reveals a gap that leaves behind those who speak languages other than English. According to the American Community Survey, residents in 5.6% of total households in Massachusetts said they spoke English less than “very well.” That amounts to hundreds of thousands of working-age adults.

The Massachusetts government’s website also can be translated into several languages, including Arabic, simplified Chinese, Haitian Creole, Spanish and Vietnamese. Yet when one reaches the application form itself, the online portal is only available in English. The option to have Google translate the page no longer exists… The state has held several virtual town halls to answer the public’s questions with some presentations in English, Spanish and Chinese.

The lack of a multilingual unemployment form has prompted at least dozens of laid off workers, if not more, to seek help from attorneys, community organizers and family members who speak English. Employees of the Greater Boston Legal Services, Lawyers for Civil Rights and the Chelsea Collaborative have become unofficial unemployment claims specialists, processing claims for workers who primarily speak Spanish, Vietnamese Cantonese and other languages.

‘Everyone is trying to figure out how to apply. The way that the Asian community applies, if they can’t speak English, is they go to the office,’ said Bethany Li, a senior staff attorney at Greater Boston Legal Services…

Gladys Vega, executive director of the Chelsea Collaborative, said she understands the state is trying to do its best during an unprecedented surge of unemployment claims, but notes that the linguistic and technological gap leaves some laid-off workers behind when they need help the most.

In Ohio, there are concerns about LEP people having access to the most basic of information in languages they understand. According to the Columbus Dispatch, LEP people may have trouble getting updates about what coronavirus is and its spread. Local and state immigrant and refugee advocates are working to get resources to people in the language they speak and read.

“As many Americans try to absorb all the information they can on the coronavirus and its spread in Ohio, some are left out of the conversation entirely.

Advocates for immigrants and refugees say about 200 languages are spoken in the state, and many of those advocates are working to make sure the individuals who speak those languages can get information about the rapidly spreading virus in ways they can understand.

There’s an extra layer of fear if you don’t speak the language,” said Houleye Thiam, president of the Mauritanian Network for Human Rights in the U.S. and a community activist in Columbus. “You can watch the governor but you can’t understand him; that’s a whole different kind of fear and uneasiness and feeling out of place…

About 3,000 Mauritanians live in Columbus, and Thiam and others are trying to get information out to them in the three main languages they speak. Translators are working to ready information from the federal Centers for Disease Control and Prevention and the state to pass along, she said. And much of the information will dispel rumors in the community, which are running rampant, she said.

The network is also trying to get resources such as hand sanitizer, masks and gloves to the community as well as volunteers who are willing to go to the hospital with patients and serve as translators.

Advocates aren’t the only ones trying to make sure that everyone is reached.

The Ohio Department of Health is linking to CDC resources in other languages on its website, coronavirus.ohio.gov, spokeswoman Melanie Amato said. The agency is also reaching out to local organizations for translation resources and the Ohio Hispanic Coalition is working to translate press releases.

Lilly Cavanaugh, executive director of the Ohio Latino Affairs Commission, has been working with the governor’s office to help area Spanish speakers..

“Access to information for those with limited English is a challenge and we are working to provide resources,” Cavanaugh wrote in an email.”

In a March 2020 publication, the Center for American Progress discussed how the pandemic has laid bare society’s healthcare and economic inequities.

“Inequality is magnified in times of national hardship. Perhaps nowhere is this clearer than in communities of color, which have long endured inequalities across American economic, social, and civic systems. Persistent segregation has restricted tens of millions of people of color to some of the most densely populated urban areas in the country; structural and environmental racism has produced extraordinarily high rates of serious chronic health conditions among people of color, and entrenched barriers in the health system continue to prevent people of color from obtaining the care they need…

While the U.S. health care system has made remarkable progress in dismantling structural barriers, too many people of color struggle to obtain the care they need due to cost, language access, and outright discrimination. Millions of people gained coverage under the Affordable Care Act, but people of color, especially AI/AN and Hispanic people, remain far more likely to be uninsured than their white counterparts due to many states’ refusal to expand coverage. According to a new CAP analysis of CDC data, 16 percent of Black people, 20 percent of Hispanic people, 19 percent of AI/AN people, and 18 percent of Asian Americans were unable to see a doctor in 2018 to due cost. By contrast, just 10 percent of white Americans were unable to see a doctor due to cost. Racial disparities in self-reported inability to afford care persist even after controlling for insurance coverage.

As America struggles with the ongoing pandemic’s dangers and life-altering changes, society must remember that although the coronavirus is an equal opportunity disease, its impact is more acutely felt by people and communities of color for whom English is not commonly understood and access to health care and government information are often fraught experiences in normal, non-emergency circumstances.