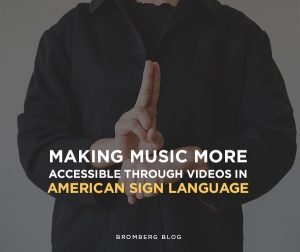 According to the World Federation of the Deaf, there are more than 70 million Deaf and Hard-of-Hearing people worldwide. More than 80% of them live in developing countries. Collectively, they use more than 300 different sign languages.

Sign languages are fully fledged natural languages, structurally distinct from the spoken languages. There is also international sign language, which is used by Deaf and Hard-of-Hearing people in international meetings and informally when travelling and socializing.

ASL is the native language of many people who are deaf and hard-of-hearing. According to estimates by the Rocky Mountain ADA Center, “… more people use ASL than most of the 380 languages recognized in the census.”

Want to see for yourself? There are many impressive sign language music videos such as:

When you think about making video content accessible for viewers with hearing loss, most often people  think of subtitles or captions. That covers all your bases, right?

Actually, it doesn’t! For people who primarily communicate in sign language, captions are not necessarily an alternative.

For someone who uses ASL in their daily life, spoken English might feel like a second language. Reading captions, then, essentially involves the process of translating the text into their first language as if the captions were in French or Spanish rather than English. Depending on how “fluent” you are, it can take some time, and when captions are moving at the speed of speech, it’s easy to get lost.

Additionally, in spoken language we often use tone to elaborate on our meaning. Have you ever gotten into an argument with someone because your sarcasm didn’t translate well through a text message or email? The same concept applies here. With sign language, meaning is added through facial expressions and body language, rather than tone. If someone, who primarily signs, is reading captions without the visual context, certain elements of meaning might not come through as clearly.

If you want to add sign language interpretation as a video overlay during the editing process, there are a few things to consider.

First, the signer needs to be visible! As discussed earlier, sign language also relies on facial expressions and body language to effectively communicate. A good rule of thumb is to make sure the overlay of the signer/interpreter takes up at least 1/4th of the width of the video to ensure their movements are clear. Similarly, make sure not to cut off any of their movements by cropping too tightly. Most signing will occur from above the waist to the head level, and at least an elbow width to each side.

Just as it’s important to adjust the placement of captions so that they don’t block other visual elements, the same is true with adding a video overlay for sign language. Find a placement on the screen where the signer won’t block significant visual elements, whether that’s on the right side of the screen, the left, towards the top, or towards the bottom. Ideally, this location will be constant throughout the video. If there are also captions, be sure not to block those, either!

A great way to add signers to a video is using a Green Screen tool. Using a green screen (or any single-colored background), you can include only the signer when adding the overlay to your video, therefore blocking as little of the original video content as possible.

So, does that mean videos should include sign language instead of captions?

While each person has their own preferences, very generally speaking, people who were born deaf and grew up using sign language prefer sign interpretation in videos, and people who lost their hearing later in life prefer captions in videos.

If you’d like to make your information more accessible to the Deaf and Hard-of-Hearing community, our ASL experts can help.

ASL videos, or videos in American Sign Language, is an area of expertise for Bromberg & Associates.

Bromberg & Associates offers turnkey solutions to companies that need to include American Sign Language videos as one of the accommodations for assessments, as well as for other accessibility purposes for government agencies, educational institutions and more. We offer sign language interpreter services throughout the USA. We can also provide you with sign language video services and speech-to-text reporting.  For more information, please contact us.