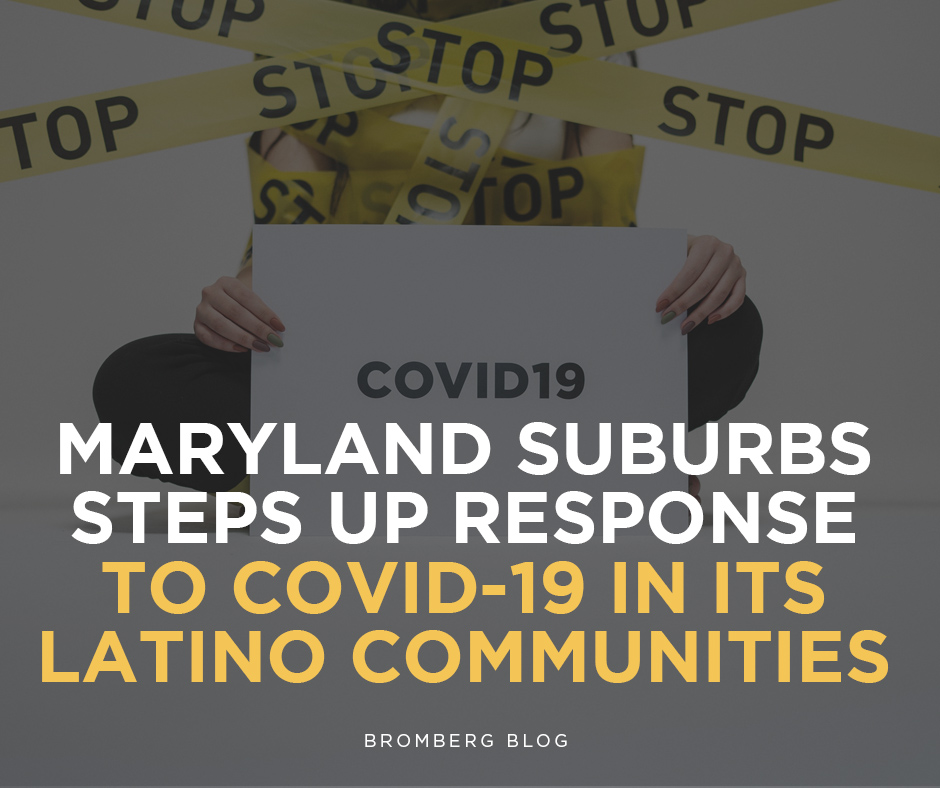 “Latinos across the country have been devastated by the deadly virus, in part because many are front-line workers who cannot telecommute, which increases their risk of exposure. Many Latinos also live in crowded or multigenerational homes, which makes it astruggle to socially distance. Many are reluctant to get tested at government-run sites because of President Trump’s public charge rule, which makes it harder for immigrants to get permanent residency status if they use public assistance.”

Now, in Montgomery County, which borders Washington D.C., efforts are  underway to meet growing community needs arising from the COVID-19 pandemic. Aided by federal financial assistance from the CARES Act, Hispanic communities are receiving the help they urgently require from organizations that people trust in our uncertain times.

U.S. Census data reveal that Montgomery County has the largest Hispanic population of all Maryland counties that border or are adjacent to Washington D.C. Montgomery is also Maryland’s largest county by population.

In addition, Montgomery County is the only D.C. area jurisdiction required to provide Spanish language election information under the Voting Rights Act of 1965. This requirement arises from the large number of limited English proficient Spanish-speaking people living in Montgomery County, more than in D.C. and any city or other county in the D.C. area.

“The electric bill had climbed past $700, and the 41-year-old mother of three had no money for clothing or food. She’d stopped driving a taxi early in the coronavirus pandemic to take care of her youngest children, one of whom is autistic. Her husband, a construction worker, had been fired.

The woman — who asked to be identified only by her first name, Diana, because she is undocumented — found help last month through a new Montgomery County initiative aimed at addressing the impact of the coronavirus in its Latino communities. A caseworker from a nonprofit called Identity connected Diana with rental assistance, food assistance and clothing; shehopes to get help with her $380 gas bill and $600 Xfinity bill as well.

“My daughter, at the beginning of the pandemic, had high honors,” Diana said through an interpreter, explaining why she is determined to secure a stable Internet connection. “Now she is completely frustrated. She raises her hand, but no one sees her or calls on her.”

Identity is one of eight groups Montgomery County is partnering with in the effort dubbed Por Nuestra Salud y Bienestar, or For Our Health and Well-being. Funded primarily through the federal Cares Act, the initiative includes nearly $6 million for testing, contact tracing, case management services and a Spanish-language hotline.

“It’s about time,” said Michelle LaRue, a senior manager of health and human services at CASA, another one of the county’s partners. “Our community was the hardest hit and continues to be the hardest hit.”

The project was announced in July after Montgomery faced criticism for its response to the spread of the coronavirus among Latinos, who make up about one-fifth of county residents but had nearly three-fourths of its newcoronavirus cases. About 63 percent of new infections in September were among Latinos, according to county data.

The project appears to be the biggest coronavirus-related effort targeting Latinos in the Washington suburbs, according to advocates. There is a state effort concentrated in Baltimore, and Prince George’s County has worked to increase testing and contact tracing in its Latino communities. Advocates say they hope other jurisdictions will mimic what Montgomery County is doing.”

Montgomery County faced substantial barriers to providing urgently needed help to communities. For example, bias and hate incidents are at a 20-year high, according to the FBI, and immigration-related policies have engendered fear and mistrust throughout the County’s Spanish-speaking communities. Working with trusted organizations, the County was able to make successful outreach to those Spanish-speaking people the new programs seek to help.

“There’s skepticism by a number of people in the community and a lack of trust,” said county council member Gabe Albornoz (D-At Large), who spearheaded the initiative alongside council member Nancy Navarro (D-District 4). “So, by working through these partners in the community that have that trust, it puts us in a better position from a public health perspective.”

The project funds six new staff members for CASA’s Spanish-language phone line, which LaRue saidhas seen a fivefold increase in call volume during the pandemic. The partnership also hopes to test 8,000 people for the coronavirus by December, with tests offered by Mary’s Center, Proyecto Salud Clinic, Care for Your Health and Mansfield Kaseman Health Clinic. Mary’s Center, a network of clinics serving mostly Latinos in the District and Maryland, launched its testing effort Sept. 18, swabbing 42 people in the parking lot of CentroNía, an early-education center in Takoma Park…

David Del Pozo, a program manager for the Latino Health Initiative of Montgomery County who is overseeing the project’s testing efforts, said the aim is to set up testing sites wherever the Latino community is.

“If that takes us to a parking lot in Langley Park or to a church in Gaithersburg or to a recreation center in Midcounty, we will go there,” Del Pozo said.

Identity’s caseworkers were helping county residents secure rental assistance even before the launch of the new initiative. They began connecting people with additional services Aug. 3 and had received 762 referrals by the end of last week. Most callers are directed to food, housing, testing and health-care services. Case managers aim to contact people and get them aid within a week of receiving their names, program director Nora Morales said. But people have been calling the hotline back repeatedly, too worried to wait. “A lot of people, you can hear the desperation in their voices,” Morales said. “Many of them are sobbing by the time they’re talking to us. It’s really heartbreaking.”

A Model for the D.C. area

“Similar efforts to address the spread of the coronavirus in Latino communities have taken root in neighboring Prince George’s County, advocates said, but not through one uniform project like Por Nuestra Salud y Bienestar. Most of the weekly pop-up testing sites in Prince George’s have happened in the Latino community at Langley Park Community Center, a county governmentspokesman said in a statement. The majority of the county’s Latino residents live in Zip code 20783, and that area has the second-highest number of tests conducted in the county.”

Building trust through language and outreach are working in Montgomery County’s COVID-19 programs. Such efforts can be models for success throughout the country as the pandemic remains an international health emergency.