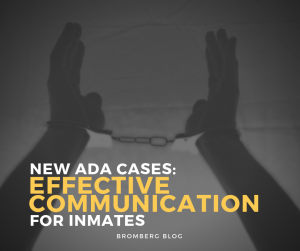 Reports of health care communication complaints by deaf people are fairly commonplace in the news and online. Over the past two years alone, many lawsuits have been filed and Department of Justice action taken to respond to concerns that health care providers communicate poorly with their deaf or hard of hearing patients.

These communication cases invariably involve questions about sign language interpreters – how and whether they were provided for people with hearing disabilities.

But what about people in jails or prisons who are deaf or hard of hearing? How do they communicate with guards, inmates, and prison employees?

Does the law require deaf prisoners to be provided with sign language interpreters for communication – The simple answer is yes.

Recently, the communication issues of deaf people who are incarcerated have been receiving more attention.

The Case of Holmes v. Godinez

One recent example –  In July 2018, a settlement was announced to resolve a 2011 class action federal lawsuit on behalf of deaf and hard of hearing prisoners in facilities operated by the Illinois Department of Corrections (IDOC).

Under the settlement agreement, IDOC must provide the following:

In a possible sign of an emerging trend, a second lawsuit on behalf of deaf prisoners was filed in the summer of 2018, this one in Georgia against the state Department of Corrections.

According to the Associated Press:

“The new complaint filed by the American Civil Liberties Union of Georgia accuses three state agencies of failing to provide deaf and partially deaf inmates, probationers and parolees with interpreters and other tools to communicate effectively. That violates the Americans with Disabilities Act and the Rehabilitation Act, the lawsuit says.

The inability to communicate means they can’t adequately get basic information like rules and aren’t able to participate in educational, religious and vocational programs, it says.

As a result, “deaf and hard of hearing people are incarcerated more frequently, suffer harsher prison conditions, remain in prison longer, and return to prison faster,” the lawsuit says.

Jerry Coen, who is deaf, was an inmate when he filed a handwritten lawsuit in August 2016 and an updated version in January 2017 against corrections officials. The ACLU on Wednesday filed a motion to expand the scope of his lawsuit and seek class-action status.

The new complaint … was filed on behalf of Coen, who is now out of prison, and 13 other current and former inmates against the Department of Corrections, the Department of Community Supervision, the State Board of Pardons and Paroles and various state officials.

Coen, 44, spent 10 years in prison for aggravated battery, burglary and false imprisonment, and said he was denied access to programs that could help him overcome alcoholism and anger issues.

“They never provided an opportunity for us to participate in programs and education,” Coen said through an American Sign Language interpreter. “And now that I’m out, I needed to know about the law.”

Coen says he can’t communicate effectively without an interpreter. In prison, officials sometimes relied on other inmates to translate. Once he was out, his probation officer often relied on his mother, who doesn’t use sign language, but instead uses “home signs,” Coen said.

Without medical interpreters during appointments with doctors or mental health workers, patients often find they have trouble understanding their diagnoses.

During 21 years in prison, Tommy Green has had several medical interventions, including knee surgery and a painful procedure in which a camera was inserted into his groin. He never had a medical interpreter, and no one ever explained why the groin procedure was done, the lawsuit says.

Prior to Carlos Herrera’s release in May, the Department of Community Supervision provided an uncertified interpreter to discuss re-entry. The interpreter told Herrera to read the conditions of his release himself, because they were “very long,” the lawsuit says. But Herrera can’t read or understand English, and any misunderstanding could have landed him back in prison.

Isolation is a problem, too. Hearing inmates can speak to each other, but deaf and partially deaf inmates have trouble communicating with those around them…, Coen said.

“They would see the hearing people call their families and be happy on the phone, but deaf people’s experience is quite different,” Coen said.

“Deaf folks are suffering, because they don’t have access to programs and communication,” Coen said. “They need to start providing accommodations: video phones, interpreters for programs, everything that they would need to enjoy their freedom when they go home and communicate with their family.”

These and similar cases raise issues that parallel those addressed by the U.S. Department of Justice (DOJ) in a 2017 settlement with the Larimer County (Colorado) Sheriff’s Office (LCSO).

In that case, DOJ “received a complaint against LCSO from TS. TS is deaf, and alleged that LCSO failed to effectively communicate with her during her three-night incarceration at LCSO from March 6 to March 9, 2015, including during her initial booking, interactions with medical staff, and internal disciplinary proceedings. LCSO denies the allegations. The Department elected to open a compliance review of LCSO’s effective communication policies, practices, and procedures with respect to individuals who are deaf or hard of hearing.”

Law enforcement, prisons, and jails are all covered by the ADA and must provide effective communications to deaf and hard of hearing people. Time will soon tell if cases like those against Illinois and Georgia are the tip of a new wave of ADA litigation.