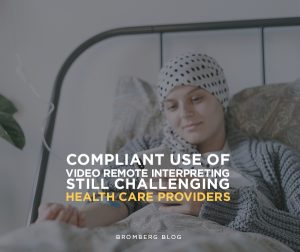 Video Remote Interpreting has long been recognized as being an essential technology for effectively communicating with deaf and limited English proficient people. This modality, also known by its acronym, VRI, experienced substantially increased usage during the COVID-19 pandemic. Such usage was especially true in 2020 given the onset of the highly infectious viral contagion and quarantines in hospitals and health care facilities that often limited in-person contact with COVID-stricken patients.

Like any technology, VRI must be operated correctly to function as intended. However, if VRI is not being used as prescribed by law and the staff trying to have it function correctly are not fully trained in using the technology, VRI simply cannot provide the effective communication for which it is designed.

Federal law is clear in mandating HOW Video remote Interpreting must be used to provide the type of communications required by multiple laws, such as the Americans with Disabilities Act, 1973 Rehabilitation Act, 1964 Civil Rights Act, and Section 1557 of the Affordable Care Act.

“Video remote interpreting (VRI) services. A public entity that chooses to provide qualified interpreters via VRI services shall ensure that it provides –

Although these federal requirements are easy to understand, in practice, they are often not followed, resulting in federal discrimination lawsuits and complaints, including this recent filing in Washington State.

On July 26, 2022, three deaf people sued Providence St. Joseph Health on behalf of themselves and all deaf persons who have been and are being discriminated against due to Defendants’ allegedly unlawful failure to provide effective communication and equal access to healthcare services at facilities in Washington’s Puget Sound Region. The three plaintiffs allege that the hospital discriminated against deaf people who communicate primarily through American Sign Language by providing them with VRI technology that did not operate correctly.

According to the federal complaint filed in the U.S. District Court for the Western District of Washington, Kate Spencer, Jason Viglianco, and Mandy Rodriguez stated that:

“[Health care defendants] have denied requests by all three Named Plaintiffs for in-person American Sign Language (“ASL”) interpreters at many of their appointments at Providence facilities. In several cases, Defendants have attempted to use VRI in place of in-person ASL interpreters, which has been marked by significant technical issues, preventing Ms. Spencer and Ms. Rodriguez from effectively communicating with their healthcare providers, and causing distress and confusion. And when Mr. Viglianco arrived for a pre-scheduled surgical procedure at a Providence facility, there was no in-person ASL interpreter present, and the VRI machine did not work, so he had to communicate via written English using pen and paper.

This prevented him from asking all the questions he wanted to ask. Defendants did not even secure effective interpretation services for post-operative discussions, and Mr. Viglianco was again forced to communicate about discharge instructions via handwritten English which left him confused and worried that he did not get all the pertinent information…

Providence is the largest health care provider in Washington with hospitals, clinics, senior care centers, hospice, and home health services in communities across the state, including in the Puget Sound Region of Western Washington. It is unacceptable that the largest healthcare provider in Washington state subjects patients with disabilities to unequal and discriminatory conditions. This lawsuit seeks to correct this discriminatory situation for all d/Deaf persons subjected to such unacceptable conditions.”

This case is in the very earliest of stages. According to the court’s docket, the health care defendants have yet to file any response to the disability discrimination complaint. There is a long way to go before the court makes any substantive decisions in the case. The three deaf people who filed the case must still prove their claims.

For example, according to the complaint:

“During [Ms. Spencer’s] June 2, 2020 appointment, the VRI screen froze, and the signal disconnected several times. Ms. Spencer and the specialist had to pause every few sentences until the video unfroze. They moved the VRI stand to different positions in the room and opened the door to see if the signal could be improved, but none of these measures worked. This appointment also included examination from a prone position, during which Ms. Spencer could not see the VRI screen very well. It was the worst VRI experience Ms. Spencer had ever had—both she and the specialist were distracted the entire time because of the technical difficulties. Ms. Spencer was extremely frustrated because she was trying to focus on her appointment, but instead was preoccupied by the VRI freezing and trying to find locations where it would work. This prevented Ms. Spencer from speaking normally, as she had to try to fit her responses and questions in between VRI freezes and she would then forget what she wanted to say. Even the specialist expressed frustration about the VRI failures, indicating that she would not use VRI again…

On or around August 26, 2020, Ms. Spencer visited the emergency department at PRMC-Everett, which is approximately six miles from her home. While Ms. Spencer knew that an in-person interpreter would have been more effective for her, she requested VRI upon arrival given the unplanned nature of the visit. The receptionist did not seem to know what VRI was. When Ms. Spencer was first called back to take her vitals, the nurse left to look for the VRI machine and returned about ten to fifteen minutes later saying it was already being used for other patients.

On or around August 28, 2020, Jason Viglianco underwent surgery at PRMC-Everett. Mr. Viglianco called Providence twice prior to the surgery to confirm that an interpreter would be present in person for his appointment. When Mr. Viglianco arrived at the hospital, there was no interpreter. He agreed to use VRI to proceed with the appointment, but the connection was poor, and the signal kept dropping out. The nurse struggled with it before giving up and taking it out of the room…

This upset Mr. Viglianco and he was worried about moving forward without an interpreter because he had poor experiences going through surgeries without ASL interpreters growing up in West Virginia, where he was unable to share his needs with his medical providers. He felt that he should have called off the surgery and rescheduled with an in-person ASL interpreter but did not want to delay his important medical care. He felt that the doctors wanted to move on without an ASL interpreter, which was upsetting.”

This case, as well as other, similar complaints, federal investigations, federal consent agreements, and guidance from the U.S. Department of Justice and Department of Health and Human Services are all cautionary tales with a clear lesson for health care about the compliant use of VRI: Follow the rules and train your people well.