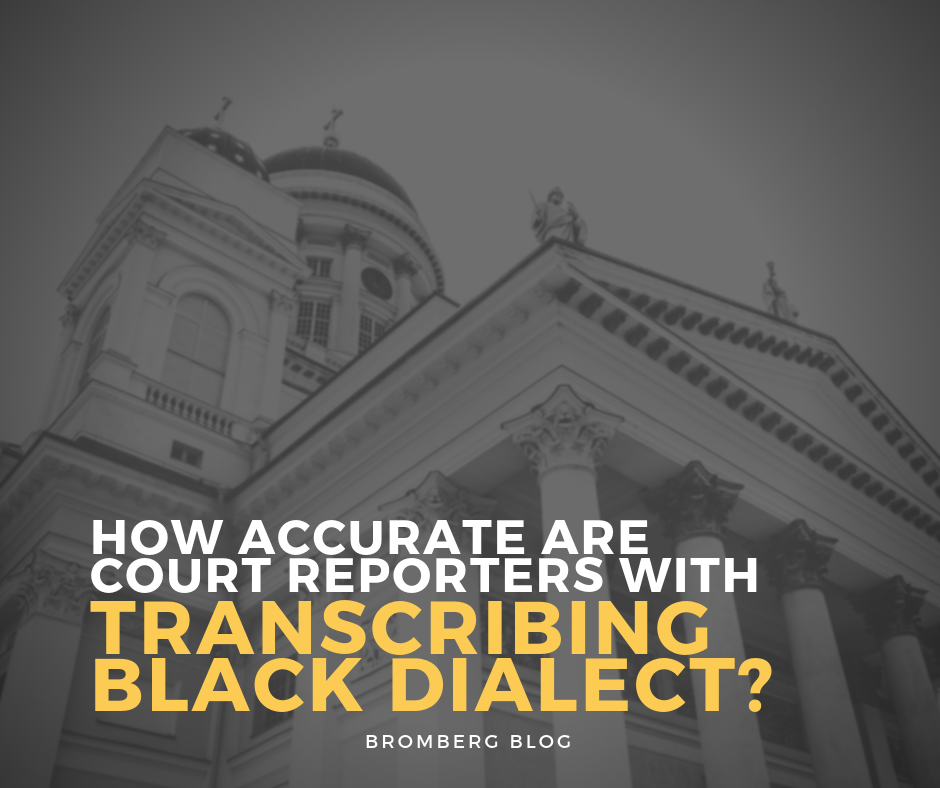 How Accurate Are Court Reporters With Transcribing Black Dialect?

Language has myriad twists and turns – accent, dialects, regionalisms, slang, racial and ethnic distinctions.  We all speak the same language differently because of our very differences. Such differences often manifest themselves in ways that surprise many but in reality, should come as no surprise at all.

However, surprise or not, intra-language differences, unless understood and captured accurately, have real world consequences. For example, take the experience of Philadelphia court reporters and how they record the testimony and comments of African Americans in Philadelphia city courts.

As the Philadelphia Inquirer reported in January 2019:

“There are times in court when Qawi Abdul-Rahman, a Center City-based defense attorney, gets the sense that folks listening didn’t understand a piece of testimony.

“You get it all the time, truthfully,” Abdul-Rahman said. He’s been concerned that the true meaning of statements like “I don’t fool with them” glide past the ears of listeners who aren’t black. The unaware might think the speaker has a problem with someone. But saying this doesn’t necessarily imply hard feelings — it means the speaker isn’t really in someone’s circle. Along with lapses in comprehension, Abdul-Rahman has observed persisting biases around how African Americans speak: “The system keeps perpetuating the same faulty norms about us.” New research confirms his hunch.”

The new research, in the journal Language, confirms that Philadelphia court reporters do not accurately record the words and speech of African Americans in court. The level of inaccuracy and misreporting is alarming, with such errors having significant implications for the administration of justice in Philadelphia courtrooms.

According to the Inquirer:

Roughly 40 percent of the sentences the court reporters transcribed had something wrong. Sixty-seven percent of attempts at paraphrasing weren’t accurate. And 11 percent of transcriptions were called gibberish. In Pennsylvania, court reporters must reach a 95 percent accuracy level to be certified.

Legal experts say the findings have disturbing implications, as they raise questions about the accuracy of Philadelphia court records and on fairness within the justice system.

“The separate question this poses is, ‘Are the judges and the jurors and the lawyers misapprehending what people are saying?’” Temple law professor Jules Epstein said. “It’s really important that people have meaningful access to the courts. And meaningful access means that we can be understood.

… Philadelphia court protocols instruct transcriptionists to ask for clarity if they have doubts about what they’ve heard, but many court reporters told researchers they felt discouraged from doing so.

Legal experts say the volume of potential appeals that may rest on misunderstood testimony is difficult to estimate. For each instance, it would be a question of whether a transcription error impacts a pivotal detail in the case.”

As the Inquirer notes:

“The paper points to a 2007 dissenting opinion from a judge in the U.S. Court of Appeals for the Sixth Circuit. The judge had listened to a recording from a 911 call and argued that it was not possible to know whether “he finna shoot me” was present or past tense. (“Finna” is a contraction of “fixing to.”) But the judge made a grammatical mistake: In African American English it is impossible for “he finna” to be in the past tense. The judge had consulted the website Urban Dictionary, a crowdsourced online dictionary for slang words and phrases.

There is a common misconception that when you hear African American English, the speaker is using poor grammar. This stigma persists despite linguistic research and ample evidence that the dialect — and its regional varieties — follows  grammatical rules of their own. Linguists note that many phrasings in African American English are camouflaged: The words may seem familiar in mainstream English, but in dialect, they act differently.

For example, with a sentence like “Don’t nobody go over there,” intonation tips whether it’s a command or an observation that no one goes to that particular place…

In October 2017, the Louisiana Supreme Court declined the appeal of a man who had been quoted telling police, “Why don’t you just give me a lawyer dog.” A justice on that court wrote that the man had not made a clear request for counsel, arguing that  “lawyer dog” was “ambiguous,” as if, reports noted, the man could’ve been asking for a pet.”

African-American English distinctions come with their own expectations of understanding from African Americans, according to academics.  Such expectations invariably lead to African Americans expecting to be understood in court and to their disappointment, chagrin, and anger when they are not, resulting in judicial injustices.

As the Inquirer reports:

“Jessica Kalbfeld,  a doctoral candidate in sociology at New York University and co-researcher on the study, argues that since the dialect has been spoken in the United States for centuries, African American English speakers have “a very reasonable expectation” to be understood in the court system. “They’re not getting the benefits of those rights, because people aren’t understanding them and don’t even know that [it’s] happening,” she said.

An undereducated ear might struggle with African American English because its speakers encode their words with distinctions of mood and tense that don’t exist in standard American English, said another co-researcher,  Taylor Jones, who is a doctoral candidate in linguistics at Penn. “Grammar in the dialect, can be more complex,” Jones noted.

Clearly, different and increased training for court reporters but also for all court staff and attorneys would be helpful in addressing the court reporting inaccuracies. Until inaccuracies are dramatically reversed, the onus remains with attorneys and the courts to address any potential linguistic misunderstandings as they arise, to prevent miscarriages of justice because of language.

“Abdul-Rahman has noticed layers of miscomprehension that may be linked to race, but also to what he detects as class, neighborhood, profession, or religion. It falls to the attorney, he explained, to translate and get moments of misinterpretation into the court record. He might repeat his question to produce answers that sound more mainstream. He might start to explain different slices of vernacular himself. But if a prosecutor objects and a judge agrees that his efforts aren’t relevant, that’s where that ends.

A lawyer can challenge an interpretation of a law, Abdul-Rahman explained, but not if a judge or juror isn’t fluent in dialect: “You can’t appeal for them not understanding.”

*Read some of Bruce Adelson’s other blog posts to learn about more developments in language access law, and be sure to contact us if you’re interested in a consultation about your own organization’s compliance with federal language access law.

PrevPreviousClient Document Portals and the Business of Translation:  A Match Made in Heaven?
NextEverything You Need to Know About GDPR ComplianceNext
English
English Español العربية
×
×