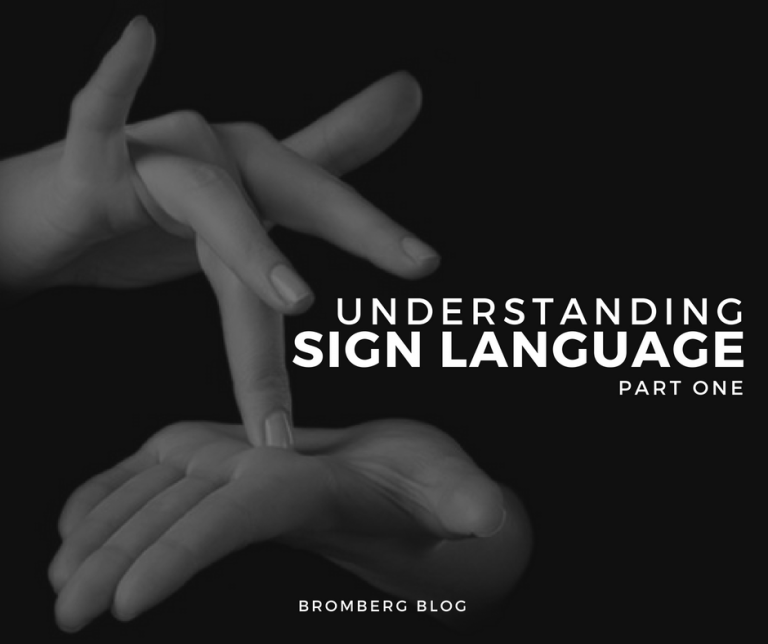 Sí, it’s true — Spanish has long ranked the most popular language to study in school, followed by French. But, the language celebrating third place might surprise you. In fact, it isn’t a spoken language at all. In 2013, American Sign Language surpassed German as the third most studied language, according to the 2016 Enrollments Short Report from the Modern Language Association.

In Part Two of “Understanding Sign Language,” we’ll explore the different variations of sign languages and the qualified professionals, who interpret them. But for now, let’s answer a pressing question: what makes signed language different than body language?

To start, sign languages have evolved over time, just like other traditional languages. Often times, those who are deaf and hard of hearing use sign language to communicate. In the US, American Sign Language is the most commonly used sign language in the US and it is markedly different than say, British Sign Language or BSL.

There are three facets that are at the core of sign language: facial expressions, hand or body movements, and sentence structure and grammar.

While hand and body movements are front and center to sign language, facial expressions are also crucial. As a matter of fact, the very same hand movement in ASL can have the opposite or a completely different meaning depending on which facial expression is used with it.

For example, the words “interesting” and “funny” are words that, “… can be changed to different varying degrees or negated by the changes in facial expression,” according to Signing Savvy. An exaggerated facial expression with one of these words would be akin to using the word “very,” and is known as a non-manual marker. Another popular non-manual marker is the use of eyebrow-raising and forward head-tilting to express a question.

Traditionally, there are five components of a sign: handshape (dez), orientation (ori), location (tab), movement, and non-manual expression. Some signed languages even treat non-movements or holds as a component.

Hand signs are the base of sign language. Some signs would be difficult for someone who doesn’t know the signed language to distinguish, but many signs are iconic. For example, to communicate “deer” in ASL, you can hold your hands up to the sides of your head to create what look like antlers. Another iconic, though not quite as obvious, hand sign includes the sign for “eat,” in ASL. An ASL signer would bring their fingers together, as if they are holding food, and then move their hand toward their mouth.

The alphabet also includes some iconic letters, though not all are. The alphabet is especially useful for finger-spelling to communicate names. Whereas some sign languages use two hands to represent a letter, in ASL, each letter is represented by one-handed signals.

Lastly, motion is important to express word nuances and ongoing tenses, such as “thinking,” or “eating.” Instead of creating a new signal for these tenses, ASL signers instead make the sign for the expression twice — in a circular motion — to express the verb is ongoing. In addition, sometimes a verb and a noun use the same sign. An ASL signer can make a grand hand gesture to represent a verb, and a small hand gesture to represent a noun.

While in theory signs that have double or even triple meanings in ASL could cause confusion, just as in English, the receiver is usually able to distinguish what’s meant by using the context of the sentence.

When it comes to grammar, ASL in some ways has more in common with Korean, than it does with English. This is because ASL uses a topic-comment structure.

A topic is related to a subject in English. In ASL, this topic can be signed at the beginning or end of the sentence. In fact, an ASL signer could even use it in both places and still be grammatically correct. Usually, the topic is a pronoun.

Puzzled as to how this could be? Check out three ways from Handspeak that someone could sign, “I am an employee,” in ASL:

After distinguishing the topic, ASL has a “comment section,” similar to an English predicate. This part of a sentence adds extra information to the sentence.

Telling the Tense
Sometimes, a third part to an ASL sentence is added — the tense, or time. Most often, ASL signers put this information at the beginning of the sentence. While it’s still grammatically correct to add the tense at the end of the sentence, doing so can be confusing for the receivers. In addition, the tense only needs to be added once to the conversation.

For example, if you were telling a story about eating at a fancy restaurants yesterday, you would only need to sign “yesterday” once, at the start of the conversation. After that, the receiver would understand that everything having to do with the fancy restaurant thereafter is in the past tense. Furthermore, to talk about multiple tenses within the same conversation, an ASL speaker can use the space in front and behind them to sign about a series of events.

To Be or Not to Be

The verb “to be” doesn’t exist in ASL in the traditional sense. For example, “I am hungry,” when signed, would be ordered more like “I hungry.” The ASL signer would nod their head while signing this to affirm it’s a positive sentence. To say the opposite, “I’m not hungry,” the ASL signer would simply make the same sign, but shake their head in negation.

Punctuation
As mentioned earlier, simple facial gestures, such as raising one’s eyebrows, can signal a question. However, an ASL speaker can also sign a question mark to emphasize a question is being asked. In this instance, the question mark goes at the beginning of the sentence. A signer could also use both facial expressions and signs to punctuate, if deemed necessary. Moreover, pauses act as periods, and expressions act as exclamation marks in conversation.

American Sign Language may be today’s third most-studied language in schools, but that doesn’t mean it’s easy. Some companies are trying to crack the code of physical translation technologies that could interpret sign languages in real time. While these technologies paint a promising future, they still have a long way to go before they’re accurate and inexpensive enough to enter the mainstream market. Until then, it’s safest to rely on real people — like the trusted professionals of Bromberg & Associates — to navigate the complexities of sign languages and to interpret them error-free. Be sure to contact us and reach out to one of Bromberg & Associates’ qualified American Sign Language interpreters in Michigan or beyond for your next sign language project.

Ready to learn more about different types of sign languages and their qualified interpreters? Get your popcorn ready and check out Part Two: Understanding Sign Language.