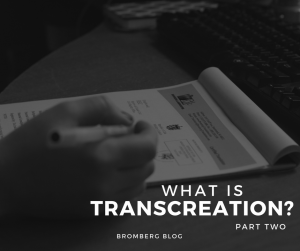 In the previous post in this series, we introduced the concept of Transcreation. Transcreation is more than simply translating text; transcreation recreates the original meaning from the source text into a target language while making sure the message matches conceptually. This is done to make sure that the transcreated message has the same impact with the audience.

First, let’s review some of the concepts of Transcreation:

Let’s review some case studies of organizations who failed to properly execute transcreation.

In 2011, to honor the United Arab Emirates 40th National Day, Puma decided to release a pair of trainers that featured the colors of the UAE flag. This caused a nationwide uproar in the country because the citizens saw the shoe as an insult to their country.

In the Arab culture, the bottoms of the feet and shoes are considered to be dirty. By placing the country’s flag onto something with such negative connotations, it is easy to understand why this product received so much backlash. This sentiment was echoed by Aida Al Busaidy, a tourism communications manager in Dubai who harshly criticized Puma for not understanding her country’s cultural sensitivity:

“A national flag represents a country and what it stands for and it is strictly not right for depicting on shoes or anything that is worn on the feet. It is highly disrespectful”.

Following the nationwide uproar, Puma released a statement explaining that the shoe was never meant to insult or offend any other their customers in the Middle East. Additionally, Puma took feedback from the UAE citizens and made the immediate action to cease production of all UAE special edition shoes.

In this case, Puma failed to execute transcreation because they did not consider the cultural differences when expanding their campaign globally. This practice might be acceptable elsewhere in the world in countries like Europe and USA where there may not be as much of a negative perception associated with the shoes and feet. When transcreating a message, it is important to understand that the meaning and intent needs to stay consistent throughout the process. Puma’s failure to understand the cultural differences and the local preferences of the UAE consumer transformed their message of celebration to one of disrespect.

Not sure if this is what they meant…

Motorola launched its Q phone in Canada they were obviously unaware of the message that they were sending to the French speakers in their campaign. The campaign featured such slogans including:

In the French language, the letter “Q” sounds a lot like “cul” which is the French equivalent of the NSFW word for buttocks. One could only imagine the surprised reactions of the consumer while the campaign was active. After this transcreation mistake went viral, Motorola eventually became aware and modified the campaign to include the phone’s full name, Motorola Q9h.

In this case, Motorola did not execute a proper transcreation of their phone campaign by not fully understanding word choice and how some words (or sounds) have different meanings in other languages. This caused the consumer to misinterpret the usage of words and the overall campaign message and intent was lost.

German automaker Volkswagen uses their popular slogan “Das Auto” as a way to signify Germany’s reputation for quality manufacturing. The foreign language element in their slogan plays well for countries such as the United States. However, Volkswagen discovered that this slogan was not positively received in Brazil as in other countries.

One of Volkswagen’s most popular vehicles, the VW Beetle, was produced in Brazil for many years. The company’s commitment to the country led to many viewing the brand very favorably. However, due to the success of the “Das Auto” campaign in other countries, Volkswagen attempted to recreate that success in Brazil by adapting to the “Das Auto” slogan and changing the previous slogan from Você conhece, Você confia” (“You know (it), you trust (it) in Brazil.

The result was that Brazilian consumers perceived the new slogan as pretentious. By VW placing heavy emphasis on the foreign aspect of the company, they eliminated the emotional connection for Brazilians to the brand when they removed the native slogan. Eventually, VW had to rescind and revert back to the original slogan.

One of the most important facets of transcreation is to ensure the recreated message has the same impact with the audience. In this case, VW failed to transcreate successfully because they removed the Brazilian’s emotional connection to the brand; a connection that had been built through VW commitment to the country. Brazilians had no such connection to the foreign slogan “Das Auto.”

In the case studies highlighted above, each organization faced challenges associated with transcreation. Transcreation is meant to aid in bridging your brand to the target audience of different cultures. By considering the facets of transcreation such as cultural differences, pun and slogans, and word usage, your message can be better tailored to the target audience; ensuring that your message does not get lost in translation.