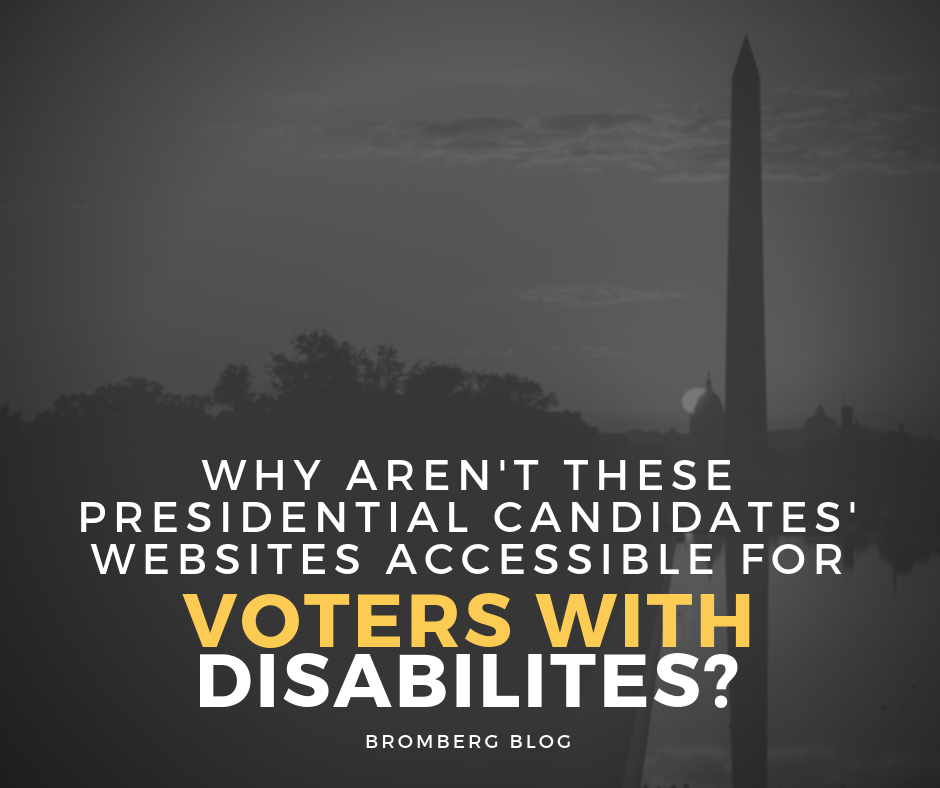 Why aren’t these Presidential Candidates’ Websites Accessible for Voters with Disabilities?

Conventional wisdom holds that presidential candidates want to appeal to a wide range of voters. One would imagine that candidates, especially those with lower name recognition than more well-known rivals, would leave no stone unturned in their search for voters who may be attracted to their candidacies. Such voters, presumably, would include people with disabilities.

Are the needs of the Disability Community properly represented?

One of the first, most visible places where candidates can make connections with voters is a candidate’s website. There, voters can find biographical information and position papers outlining a candidate’s views on issues of the day.

But not so fast…

According to Vox.com and the Miami Lighthouse for the Blind, they found that many of the 2020 presidential candidates’ websites are inaccessible to people with disabilities.  As reported by Vox on June 26:

“On Tuesday, a day before the first Democratic debates, every presidential candidate (including the Republican one) was called out by the Miami Lighthouse for the Blind and Visually Impaired for having an inaccessible campaign site… Blind and low-vision users, along with disabled people who have certain other impairments like seizure disorders and cognitive disabilities — as well as those who are deaf and hard of hearing — can’t actually use the candidates’ websites. It’s just the first in a series of obstacles disabled communities face when trying to make informed voting decisions, even though these groups have an especially vested interest in politics.

Thirty-five million eligible voters are disabled, and disability turnout lags behind that of non-disabled voters by 6 percentage points; if disabled people voted at the same rate as their non-disabled counterparts, there would be 2.2 million more voters. One of the reasons is that voting is extra difficult for disabled people. Inaccessibility of polling places and election materials is a factor, as are voter suppression tactics — disabled people are less likely to have state identifications, for example, and get caught in voter ID laws.”

When Miami Lighthouse for the Blind analyzed the candidates’ websites, they discovered, compellingly, that all of the websites analysts are blind.

Virginia Jacko, CEO of Miami Lighthouse for the Blind, an organization that provides services to promote independence for blind and low-vision people of all ages, spearheaded the user testing for the 2020 candidates’ sites. The study was conducted by an entirely blind technical staff (Jacko is also blind).

Testers found significant errors that made it difficult or impossible to engage with the candidates’ websites.

“I was surprised because not a single candidate — either the people who are going to be here for the debate or the Republican candidate — not a single one had an accessible website,” said Jacko. They argue that this is a violation of the Americans With Disabilities Act.

The Effect of Inaccessibility

Former Vice President Joe Biden, Sen. Kirsten Gillibrand, Rep. Tulsi Gabbard, and former Rep. John Delaney had websites with the fewest errors, while Sens. Bernie Sanders and Elizabeth Warren, along with Mayor Pete Buttigieg, came in last in the assessment. Lighthouse for the Blind told me the Andrew Yang and Warren campaigns have both reached out to discuss design improvements since the study was released.

It’s a surprising outcome as Sanders, Warren, and Buttigieg have so far been best on disability issues. Sanders has the most robust set of policies of the candidates and just recently commemorated the 20th anniversary of Olmstead v. L.C., a key disability civil rights case involving two intellectually disabled women who sued for their right to live in the community and won. Similarly, Warren made a note of the anniversary on Twitter, while Buttigieg was the first candidate to hire an out disabled staffer, though neither has outlined official policies.

“All of the platitudes, mentions, or policy statements about disability issues by candidates ring hollow when potential disabled voters can’t even access their websites,” says Wong.  On any of the candidates’ websites, the Lighthouse for the Blind team couldn’t identify a single accessibility statement to provide a commitment to accessibility or information about how to request assistance.

The disability community, according to Vox, has an “outsize interest in [many of] the social issues candidates are discussing in the debates.” These include, for example, opioid addiction, mental health, police violence, and veterans’ affairs. Any voter interested in a candidates’ positions on these and other issues may first turn to candidate’s website to learn more. However, website inaccessibility issues will make such basic research hard if not impossible for voters with disabilities, Vox noted.

“…When you can’t access basic campaign information, you can’t make informed decisions. You’re being shut out of the voting process,” said Emily Ladau, editor-in-chief at the disability-focused publication Rooted in Rights and creator of the #InaccessibilityMeans social media movement.

‘I don’t think anybody has ill intent,’ said Jacko. But it’s still a telling sign for disabled voters who are being told that their basic access to information about candidates simply doesn’t matter. Someone should come up with a plan for that.”

The Internet and its websites are integral parts of our world in this day and age. We seemingly rely on them more and more each day for all kinds of information. If someone with a disability cannot access websites that contain information about 2020 presidential candidates, that person will justifiably feel left out of the greater conversation when choosing the next president.

All candidates and organizations must be mindful about how their online information is shared and ensure that people with disabilities are part of the conversation.

The following informed comments from the U.S. Department of Justice in 2003 speak volumes about the critical importance of Internet access regardless of disability:

“Today, among other things, public entities use Web sites to promote employment opportunities and economic growth, improve the collection of payments and fees, encourage civic participation, and enhance educational opportunities. However, individuals with disabilities are often denied equal access to many of these services, programs, and activities because many public entities’ Web sites are inaccessible.  Thus, there is a digital divide between the ability of citizens with disabilities and those without disabilities to access … services, programs, and activities….”

The Americans with Disabilities Act (ADA) and, if the government entities receive Federal funding, the Rehabilitation Act of 1973, generally require that State and Local governments provide qualified individuals with disabilities equal access to their programs, services, or activities, unless doing so would fundamentally alter the nature of their programs, services, or activities or would impose an undue burden. Many people with disabilities use assistive technology to enable them to use computers and access the Internet.  Blind people who cannot see computer monitors may use screen readers – devices that speak the text that would normally appear on a monitor. People who have difficulty using a computer mouse can use voice recognition software to control their computers with verbal commands.

People with other types of disabilities may use still other kinds of assistive technology.

New and innovative assistive technologies are being introduced every day. Poorly designed websites can create unnecessary barriers for people with disabilities, just as poorly designed buildings prevent some from entering.  Designers may not realize how simple features built into a web page will assist someone who, for instance, cannot see a computer monitor or use a mouse.

Check out some of Bruce Adelson’s other blog posts to learn about more developments in language access law, and be sure to contact us if you’re interested in a consultation about your own organization’s compliance with federal language access law.

Mr. Adelson is a Department of Family Medicine faculty member at Georgetown University School of Medicine where he teaches Implicit bias, cultural and civil rights awareness.

Beginning in June 2019, he will teach again at Cornell University.