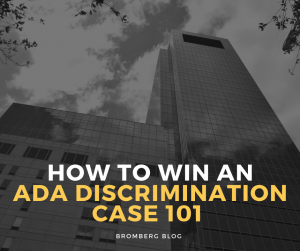 How to Win an ADA Discrimination Case 101

Take this scenario – You believe that you have been discriminated against because of a disability. You decide to sue, claiming federal disability discrimination.

For either side in the case, the person with a disability or the organization sued, who wins? What does each side need to show or prove to win the lawsuit?

Several recent federal court decisions provide good roadmaps with answers to the ultimate litigation question of winner and loser. One of the best examples is an August 2019 federal appeals court decision in the case of Kathleen Biondo v. Kaleida Health in Buffalo, New York. The trial court initially dismissed Biondo’s discrimination case. However, Biondo later appealed that decision to the U.S. Court of Appeals for the Second Circuit whose jurisdiction includes New York State.

Kathleen Biondo was born deaf. According to the appeals court, she reads at a fourth‐to‐fifth grade level, has “unintelligible speech and cannot lip read well.” Biondo is fluent in American Sign Language (ASL). Biondo’s husband is not deaf. He has had no formal ASL training. The Biondos communicate with a mixture of some ASL and their own private signs and signals.

As the court explained:

“In 2014, [Kathleen] Biondo sought treatment at {Kaleida Health in Buffalo, NY] for recurrent episodes of fainting.

She and her husband….unsuccessfully requested an ASL interpreter from hospital staff several times during her six‐day stay. Biondos made requests for an ASL interpreter [to] several hospital staff: the attendant working at the arrival desk; nurses who escorted Biondo to a room and checked her vital signs; nurses in the emergency room; and nurses in the department to which Biondo was admitted.”

Court testimony revealed that the Biondos made repeated requests to various hospital employees for an ASL interpreter to enable the legally required effective communication between Kathleen Biondo and her health care providers.

The appeals court recounted, as the interpreter requests were made to them, the hospital staff repeated to the Biondos, “We will, we will, we will [get you an interpreter].” Kathleen Biondo made multiple requests herself by pointing to her left ear to indicate she was deaf, by writing notes, and by her husband repeating his wife’s ASL pleas during his visits, the Second Circuit explained. Eventually, Mr. and Mrs. Biondo gave up and discontinued asking for ASL interpreters. At this point, the hospital administered to Biondo, through tests, procedures, and examinations.

Are hospitals required to provide interpreters?

Let’s stop and look at what had occurred up to now:

A deaf patient informed the hospital that she needed an ASL interpreter to facilitate effective communication since her English understanding was at an elementary school level and she could not effectively lip read to understand health care conversations.

Despite the multiple requests by the patient and the hospital staff repeatedly informing Mrs. Biondo that the hospital would need to provide an interpreter, the hospital never even tried to secure any interpreters. The situation, as explained by the appeals court, left a deaf patient without her requested communication method, as hospital staff essentially ignored what she asked for.

Biondo underwent care without understanding what was happening to her, as the appeals court noted:

One of Biondo’s claims was for money damages because of the hospital’s alleged intentional discrimination or deliberate indifference to her communication needs because of her disability. To prove that the hospital acted with intent, ill will or malice toward her, Biondo had to prove that staff knew about her ASL interpreter preferences and deliberately ignored them despite having the ability to secure interpreters if they so choose. Biondo would also need to show that ASL was her preferred communication method and was necessary for her to understand the medical procedures and diagnoses given to her.

The court found there was “no dispute” that the hospital did not give Mrs. Biondo the required, requested communication method even though “doctors and nurses … had the authority to call for an interpreter.”

The hospital’s failure to ever provide effective communication by providing an interpreter or trying to locate one despite ongoing requests over a multiple-day hospital stay was quite damning evidence, according to the court. If the hospital had at least made several reasonable attempts to secure an interpreter, either in-person or through video remote interpreting, the hospital would have some defense to Biondo’s intentional discrimination claims, even if the hospital’s repeated attempts all failed. At least, in those situations, some efforts would have been made instead of no efforts at all.

That failure to even try put the hospital in a difficult liability position, the appeals court concluded. In such a case, the court decided, the lack of effort was likely intentional and deliberate, rather than accidental, sloppy, or negligent. The court reversed the dismissal of Biondo’s lawsuit, reinstated her discrimination claims, and ordered the trial court to reconsider the case according to the appeals court’s decision.

“Turning to the merits of the argument, the record supports an inference that the staff had actual knowledge of the potential disability discrimination violation. Biondo and her husband repeatedly asked nurses for an interpreter when she first arrived at the hospital; and Biondo continued to request an interpreter and expressed her dissatisfaction with written communication.

A jury might also find that certain staff members observed Biondo struggling to communicate, knew that she chiefly used ASL and lacked the education to communicate adequately in writing, had the authority to call for an ASL interpreter, and deliberately failed to do so notwithstanding repeated requests.

The facts of this case are arguably worse than those of another disability discrimination lawsuit where in that case at least one hospital employee ‘made some efforts to find an interpreter.’

So, what are the takeaways from the Biondo/Kaleida Health decision?

Where a deaf patient makes repeated requests for an ASL interpreter, explaining that no other communication method was effective or appropriate for her, the hospital must at least try to get that interpreter. Trying is better than ignoring and not fulfilling the communication requests, especially when staff repeated that “we will” find an interpreter.

Without at least attempting to locate an interpreter for a deaf and hard of hearing patient, the hospital may well be unable to show it did not deliberately, intentionally, discriminate against someone because of disability. With proof of intent comes the potential for a jury to force an organization to open up its checkbook and pay out for willful, deliberate discrimination.

Check out some of Bruce Adelson’s other blog posts to learn about more developments in language access law, and be sure to contact us if you’re interested in a consultation about your own organization’s compliance with federal language access law.