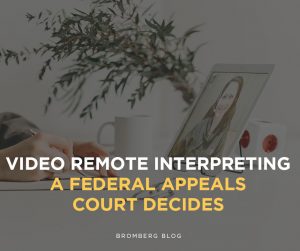 Video Remote Interpreting (VRI) is a valuable communication tool, made even more so by the virtual communication realities of the COVID-19 pandemic. However, like many technologies and communication modalities, there are specific legal requirements and standards that regulate the way VRI must be used.

Plaintiffs alleged that they visited Baptist’s hospitals several times between 2009 and 2014 as patients or as a patient companion. While they requested in-person, on-site ASL interpreters for most visits, the hospitals instead relied primarily on Video Remote Interpreting. Silva and Jebian alleged that the hospital VRI machines routinely did not work and hospital staff would instead rely on family-member companions for interpretive assistance or exchange hand-written notes. Sometimes, after a VRI breakdown, an ASL interpreter would be called to assist with communication in person.

But in 2017, the appeals court did not go further to discuss whether Silva and Jebian had proven that Baptist was liable for disability discrimination money damages. In the most recent decision, the appeals court took that extra step.

To receive money damages for discrimination based on disability, lawsuit plaintiffs must prove “deliberate indifference” or intentional discrimination or misconduct. Such conduct can be shown by, for example, an organization repeatedly, knowingly ignoring requests for legally compliant effective communication accommodations.

In the part of the new December ruling on Silva and Jebian’s money damages claim, the three-judge appeals court panel ruled:

“The district court held a bench trial in November 2018 on Plaintiffs’ claims…. At trial, Baptist presented evidence that beginning in 2014 or 2015, it revised its policies to require the provision of live in-person interpreters upon request by a patient or guest, to provide VRI while waiting for a live interpreter, and to schedule live interpreters for scheduled appointments. Baptist’s witnesses testified that these policies had been consistently implemented since they were adopted. “

The district or lower court in 2018 ruled in favor of Baptist and against Silva and Jebian on their claim for money damages. Silva and Jebian again appealed to the 11th Circuit, which released its newest ruling in December 2020.

In 2020, the Eleventh Circuit decided:

“To prevail, a disabled person must prove that he or she was excluded from participation in or denied the benefits of the hospital’s services, programs, or activities, or otherwise was discriminated against on account of her disability. Under this standard, a hospital violates the [federal disability discrimination law] when it “fails to provide ‘appropriate auxiliary aids and services’ to a deaf patient, or a patient’s deaf companion, ‘where necessary to ensure effective communication.

“Deaf patients are not “entitled to an on-site interpreter every time they ask for it,” however. “If effective communication under the circumstances is achievable with something less than an on-site interpreter, then the hospital is well within its obligations to rely on other alternatives.” Whether a particular aid is effective “largely depends on context, including, principally, the nature, significance, and complexity of treatment.”

While the choice to rely primarily on VRI instead of in-person interpreters alone does not establish deliberate indifference…, the simple failure to provide an interpreter on request is not necessarily deliberately indifferent to an individual’s rights.

However, the plaintiffs presented substantial evidence that during their visits between 2009 and 2014], the VRI machines routinely failed to facilitate effective communication. Sometimes the VRI picture would be choppy, unclear, or would cut out, and sometimes the VRI machine failed to operate at all. In Silva (the court’s earlier 2017 decision), we described how the malfunctioning of the VRI machines “could generate a reasonable inference of an impaired informational exchange” that was likely to occur each time Plaintiffs visited Baptist’s hospitals.

Given that Plaintiffs “routinely” experienced these VRI malfunctions at Baptist’s hospitals over a period of several years, a jury could reasonably infer that hospital staff knew that the continued reliance on VRI as an interpretive aid, without correcting its deficiencies, was “substantially likely” to result in the impaired informational exchange experienced by Plaintiffs (Jebian, intending to decline the use of VRI at Baptist’s hospitals, “acted reasonably in anticipating that the VRI would not facilitate effective communication”).

A jury could thus conclude that Plaintiffs experienced instances of ineffective communication as a result of a “deliberate choice” by Baptist officials, rather than mere negligence.”

The last sentence here is the key. Silva and Jebian’s proof, as decided by the appeals court, that providing ineffective communication was a “deliberate” or intentional choice by Baptist staff and leadership, means they can recover money damages.  That proof shows that Baptist knew it was not providing legally required effective communications, and took insufficient actions to reverse the situation and instead afford effective, legally accepted communication for deaf people.

This case will now go back again to the lower court for more hearings about the amount of money damages in this case or both sides will discuss an out of court settlement without having another trial or court hearing. With the Eleventh Circuit’s latest decision, a new lower court trial may well be unlikely to avoid a large money damages award from a judge or jury.