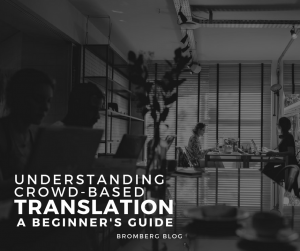 What is Crowd-Based Translation: A Beginner’s Guide

From Kickstarter projects like the “Fidget Cube,” to Starbucks’ “White Cup Contest,” crowdsourcing — or collectively contributing ideas, money, time, or expertise to a cause or a product — is shaping the future. The translation industry is no exception.

In the translation industry, crowdsourcing concerns assigning translation projects to individuals or groups of people, often through what’s called a “flexible open call.”  This invitation seeks individuals, mostly amateurs, who want to work on a smaller piece of a larger project or document.

This translation technique gathers numerous people who use shared resources in a collaborative work space, like via cloud computing, often referred to as, “the cloud.” Cloud computing includes, “… the delivery of on-demand computing resources — everything from applications to data centers — over the internet on a pay-for-use-basis,” according to IBM’s site.

One of the most popular cloud computing services is Google Cloud Computing, which includes everything from data analytics to management tools. By using these services collaboratively, companies and businesses can communicate more effectively and cut the time it takes to translate a document or project.

But, there isn’t a single type of crowdsourced or collaborative translation. And while businesses enjoy some benefits by using these crowd-based techniques, such as lower costs, there are also plentiful disadvantages the internet has swept under the rug. Inconsistent quality and inaccuracy are the most common crowdsourcing issues. But, different projects call for different methods. Learn more about the different types of collaborative translation in the section that follows to see if any of the methods might be right for your company.

Crowd-based translation can be broken down into even more specific classifications that are helpful when deciding on which type is best is for your project, if at all. Many of these collaboration techniques are used alone, but more often than not, they’re paired with other types to meet different project needs.

Take a look at some of the most common types that follow:

The Success and Decline of Crowd-Based Translation

When the Oxford English Dictionary editors collected language data long ago, they probably used pencil and paper, not web-based programs. However, similar dictionary-compilation work continues today online, such as for the Oromo language, a lesser-known, lesser-documented language spoken in the Horn of Africa. Some programs such as WeSay even, “…help non-linguists build a dictionary in their own language,” without the use of complicated code and expensive software.

Crowd-based translation has also been used to create scientific and mathematical terms, such as “light year,” “organism,” and “photosynthesis,” for American Sign Language, according to the University of Washington.

Even larger companies, like $15-billion company Facebook, recognize how important crowdsourcing is in the translation industry. In fact, Facebook has asked users to translate for free, to “…better serve the 60 percent of its 69 million users who live outside the United States,” and aid in the company’s global strategy.

The Disadvantages of Crowd-Based Translation

But, one question remains: Can crowdsourcing lead to high-quality translations, if it’s done by amateurs? The NBC News article comments that, “Critics complain of sloppiness and skimping, even as Facebook says it is improving service in an innovative way.”

While crowdsourcing is practical for some project-types, especially for projects in which accuracy isn’t so important, it isn’t fitting in most cases. Before jumping on the crowd-based translation train, let’s take a look at some of the disadvantages that come with these translation techniques:

Using crowdsourced translation and other collaborative techniques for your businesses can be tempting, especially if money is tight. But in the long run, these crowd-based techniques are risky at best and provide inconsistent results. Perhaps, the best way to ensure high-quality translation is to entrust language solution companies like Bromberg & Associates to combine their own collaborative translation techniques with their team of qualified professionals for your translation needs and projects.