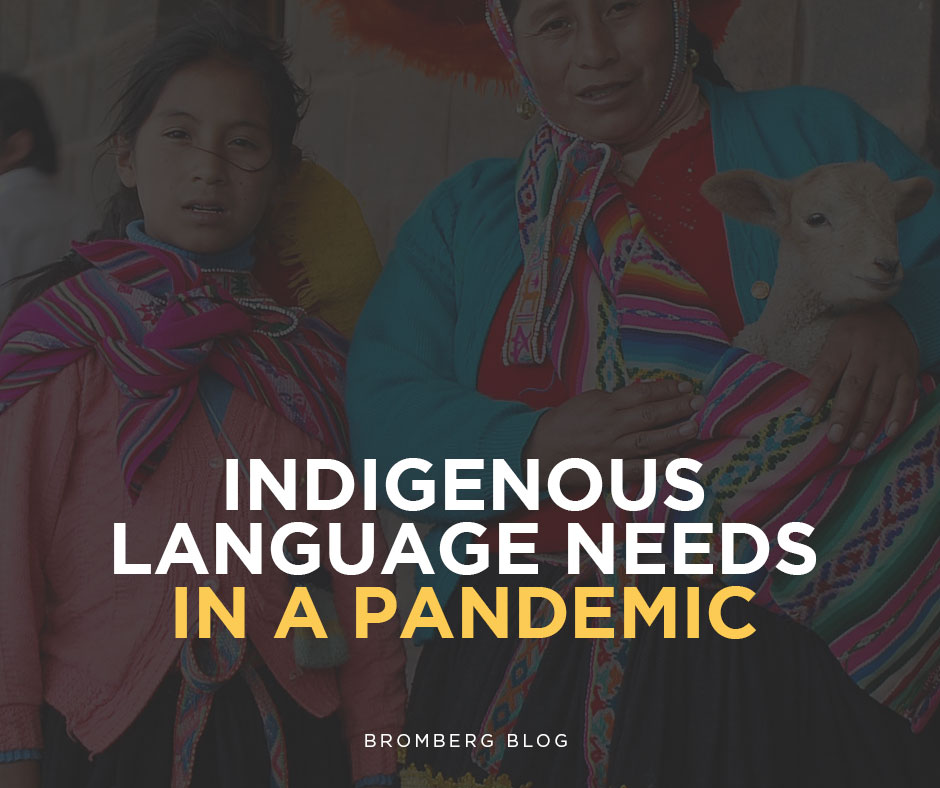 While Spanish is the predominant language spoken in Central America and Mexico, indigenous and Mesoamerican languages abound here as well. These languages, such as Mixteco or Mixtec, have been around for more than 10,000 years. Comparatively, Mam, a Mayan language, is relatively young, dating back to the year 500 A.D. There are many variations of Mixteco. Various Mesoamerican dialects have also absorbed some Spanish and English vocabulary.

Some of these languages are considered to be “critically endangered” of becoming extinct, as reported by the United Nations Educational, Scientific, and Cultural Organization (UNESCO).

The number of people speaking these languages in the United States is relatively small. Mesoamerican language speakers also often come from small communities in remote parts of their home countries of Mexico and Guatemala, for example.

Finding people who can speak Mixteco and other indigenous languages is a challenge in normal times. During the COVID-19 pandemic, this language access challenge has grown exponentially in difficulty.

As reported by NBC:

“Sergio García Campos and Juan Martínez García called New York City home. Hailing from Lomazoyatl, a town of fewer than 1,000 people deep in the mountains of the state of Guerrero, Mexico, they had come to the U.S. to earn money to send back to their families at home, with the hopes of eventually returning…

When COVID-19 started to spread like wildfire through NYC, García Campos said to his cousin, “I think we need to stop working, because it is too high of a risk.” His worries proved prescient. On April 6, staff at Lincoln Hospital in the Bronx, one of the city’s busiest medical facilities, called García Campos to tell him his cousin had died of COVID-19 complications.

Human rights organizations who work with indigenous immigrants worry that language and cultural barriers make it harder for them to stay safe against the pandemic.

Martínez García is one of at least 28 indigenous immigrants from the mountain region of Guerrero who has died from the pandemic in New York City, according to the Mexican Human Rights organization, Tlachinollan.

Marco Castillo, from the Transnational Villages Network, estimates there are about 200,000 New Yorkers who come from these indigenous areas.”

Indigenous Languages are not Spanish

Indigenous languages are not Spanish. Their speakers, because of their national origins, are often mistaken for people who speak Spanish. They are then frequently given Spanish-language documents to read and Spanish-language interpreters for spoken language assistance. However, these efforts, betraying a lack of cultural and linguistic awareness, are invariably unhelpful and can have tragic, heart-breaking consequences.

“While Spanish is common in [New York] city, the cousins’ native language is Tu’un Savi, or Mixtec, part of a group of Mesoamerican languages whose origins go back 10,000 years. García Campos said he didn’t understand the documents he received from the hospital, which were in English.

García Campos told NBC News that the worst discrimination he and his cousin had faced was from fellow Mexicans who shut them out from advancing beyond poorly paid jobs such as restaurant dishwashers, mainly because of language barriers.

“We don’t grow up speaking Spanish and only speak Spanish that we learn on the street, which makes it hard to understand many things,” García Campos said…”

Emergency planning that encompasses ALL communities, including communities of color, communities of limited English proficiency with people who speak rare, Mesoamerican languages, is essential for public health and also to comply with federal law.

As these agencies state in an emergency/disaster response guidance document:

“[Federal funding] recipients should make language services available in all their public-facing programs or activities. Language services may include in-person interpretation, telephonic interpretation, translation services, monolingual communication in the LEP person’s language, and sight translation. Including input from and addressing the needs of LEP populations in evacuation and disaster preparedness plans that are made widely available helps ensure that communities have access to them when needed.

[Federal funding] recipients should assess the language needs of the service community and develop a language access plan, which is a management tool that provides an administrative blueprint for bringing the agency into compliance with language access requirements. Such plans outline the recipient’s policies and standards for delivering services to LEP individuals and describe how the agency will implement those policies and standards, including explaining how the agency will increase its capacity to address the language service and resource needs identified in the self-assessment.

Failing to plan for and serve immigrant communities in emergencies can undermine response efforts and increase safety risks for both local communities and first responders… emergencies and disasters highlight a recurring lesson: we need to take proactive measures to ensure that all members of our communities are appropriately incorporated into emergency management activities.”

“Not allowing people to communicate in their native language is almost a death sentence.”

Not being able to communicate with people in a health emergency can have devastating consequences, as with the Garcia cousins in New York City. Invariably, hospitals and health care providers have difficulty identifying Mesoamerican language needs and often do not have the capacity to provide the essential, legally required language services.

According to Odilia Romero, a Zapotec medical interpreter in Los Angeles and founder of the Binational Front of Indigenous Organizations, FIOB:

“… hospitals rarely have interpreters for the various native languages that indigenous migrants speak. FIOB normally helps advocates for these native speakers requesting in-person interpretation or via telephone, but this has been impossible during the COVID-19 crisis.

Not allowing people to communicate in their native language is almost a death sentence, said Romero. Romero was hoping that the 2020 census would help indigenous people be counted, showing their growth and allowing them to advocate for more indigenous interpreters, but she’s afraid the pandemic will thwart efforts to get an adequate count.

FIOB, along with CIELO (Comunidades Indigenas en Liderazgo), produced a series of videos in indigenous languages that are spoken in the U.S., Mexico and Guatemala to help educate people about the threat of COVID-19 and how to prevent the virus’ spread. The videos have circulated via social networks and person-to-person via Whatsapp.”

Videos, social networks, and person-to-person social media tools are helpful for reaching and communicating with LEP people, especially speakers of rare, not widely known or spoken languages. As Census 2020 data will soon reveal, communities across America may find that their residents speak languages unknown to local and state governments. The pandemic has revealed the need to “know your community” before a new health emergency strikes.

To do so effectively, communities and governments must take stock of whom their neighbors are and the languages they speak. As the US Department of Justice states:

“Recipients should periodically review their [language] plans to evaluate whether changes need to be made, including addressing changing demographics of their service populations”.

© Bruce L. Adelson 2020. All Rights Reserved The material herein is educational and informational only. No legal advice is intended or conveyed.

PrevPreviousMaryland suburb steps up response to COVID-19 in its Latino communities
NextVoting culture around the world.Next
English
English Español العربية
×
×