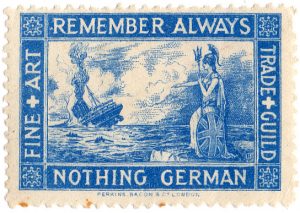 Language access considerations and controversies may seem like a recent phenomenon. Issues surrounding non-English languages are part of a larger picture that also includes English-only laws, restrictions on speaking non-English languages, resistance and opposition to immigration and immigrants, and more and more of an inward focus in response to international concerns, such as terrorism, conflict, and war.

While such themes are playing out in the United States of 2017, they are not unique to our time. Indeed, these same themes were hot topics about 100 years ago, in the aftermath of World War 1, and eventually led to one of the earliest U.S. Supreme Court decisions recognizing and reaffirming the importance of language access.

The Siman Act: Legislation for an Anti-German Era

After World War I, America found itself caught up in a virulent anti-German vibe. This sentiment extended to resistance and opposition in general to “non-American” cultures, ideas, and languages.  Efforts were made to ban German music at public performances and block meetings of German-American fraternal organizations. State and local governments passed laws to prohibit people from speaking German in public and from teaching German and other languages in schools, including in religious instruction.

In 1919, Nebraska enacted the Siman Act, which restricted the study of foreign languages in Nebraska schools and prohibited teachers from speaking non-English languages in classrooms. In pertinent part, the statute read: “No person, individually or as a teacher, shall, in any private, denominational, parochial or public school, teach any subject to any person in any language other than the English language.”

The Siman Act was not an outlier. Other states and localities had enacted similar English-only laws by 1919. These legislative acts were motivated largely by xenophobic concerns and fears of immigrants and non-English speaking “foreigners,” whose different languages and cultures were seen as dangerous and “un-American.”

According to a 2017 American Bar Association Journal article, the following comment by a state legislator aptly sums up the English-only spirit of postwar-America:  “If these people are Americans, let them speak our language. If they don’t know it, let them learn it. If they don’t like it, let them move.”

In 1920, Robert Meyer, a Nebraska teacher, was prosecuted for violating the Siman Act when one of his students in class read a Bible passage aloud in German. Meyer pleaded not guilty and was tried and convicted for his crime. Meyer refused to pay the $25.00 fine imposed on him and appealed his conviction to the Nebraska Supreme Court, which upheld his sentence and the legality of the Siman Act.

Meyer took his case to the court of last resort, the United States Supreme Court, which heard the case in 1923, by which time English-only laws had proliferated and expanded their proscriptions against perceived language and cultural “threats.”

In June 1923, the Supreme Court issued its ruling. In a dramatic decision for the times, the Supreme Court by a vote of 7-2 overturned Meyer’s conviction, declared the Siman Act and others like it unconstitutional, and gave a ringing endorsement of language instruction and education.

The Supreme Court Rules in Favor of Language Access

Justice McReynolds authored the Court’s majority opinion. His words speak to many of the issues and controversies in the United States of 2017:

“… Mere knowledge of the German language cannot reasonably be regarded as harmful. Heretofore it has been commonly looked upon as helpful and desirable. Plaintiff [Meyer]… taught this language in school as part of his occupation. His right thus to teach and the right of parents to engage him so to instruct their children, we think, are within the liberty of the [U.S. Constitution].

It is said the purpose of the legislation was to promote civic development by inhibiting training and education of the immature in foreign tongues and ideals before they could learn English and acquire American ideals, and “that the English language should be and become the mother tongue of all children reared in this State.”

… [But] the individual has certain fundamental rights which must be respected. The protection of the Constitution extends to all, to those who speak other languages as well as to those born with English on the tongue. Perhaps it would be highly advantageous if all had ready understanding of our ordinary speech, but this cannot be coerced by methods which conflict with the Constitution — a desirable end cannot be promoted by prohibited means.

The desire of the legislature to foster a homogeneous people with American ideals prepared readily to understand current discussions of civic matters is easy to appreciate. Unfortunate experiences during the late war and aversion toward every characteristic of truculent adversaries were certainly enough to quicken that aspiration. But the means adopted, we think, exceed the limitations upon the power of the State and conflict with rights assured to [the] plaintiff… The interference is plain enough, and no adequate reason therefore in time of peace and domestic tranquility has been shown.

It is well known that proficiency in a foreign language seldom comes to one not instructed at an early age, and experience shows that this is not injurious to the health, morals or understanding of the ordinary child.”

The Supreme Court’s landmark 1923 opinion striking down English-only laws that were sweeping post-World War I America sends a powerful message of liberty, justice, and personal freedom 100 years into the future, to us today.

In perhaps the first language access court case in U.S. history, the Supreme Court’s recognition of the value of non-English language knowledge and education clearly resonates through time to our multi-cultural, multi-lingual society of 2017.