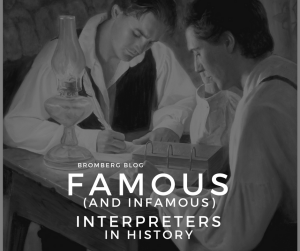 Famous (And Infamous) Interpreters in History

Interpreters often have a front row seat to many notable events throughout history. In this article, we will highlight some of the most famous interpreters. Our Interpreting Services and Video Remote Interpreting teams have worked on this list.

Due to their great achievements (or failures), the interpreters listed below will be remembered for their contributions to the interpretation profession.

One of the most famous explorers of all time, Sacagawea will be forever known as the primary interpreter/guide for the Lewis and Clark expedition into the American West. Along with being one of the most important members of the expedition, she was also the only female of the group.

In 1804, the expedition lead by Lewis and Clark entered the area where they met Sacagawea and quickly hired her as an interpreter. Her understanding of the Shoshone language would prove to be very valuable while on their journey as she was able to aid in negotiations with the Shoshone tribe and the explorers. While on the journey in 1805 Sacagawea gave birth to her son, Jean Baptiste Charbonneau. By traveling with a newborn baby, Sacagawea served as a natural symbol of peace. In addition to her interpreting skills, Sacagawea also aided the expedition which her knowledge of plants. This was very valuable, when expedition members needed to know which plants were edible.

If you have aspirations of becoming a television icon, you may want to become an interpreter like Jack Jason. Jack Jason is known as the interpreter for actress Marlee Matlin. Jack Jason’s career as an interpreter came naturally to him; he grew up with two deaf parents, and would use sign language daily to communicate. After graduating college, he found work as an interpreter for Broadway performances. This eventually led to him being contacted by William Hurt’s assistant (William Hurt was dating Marlee Matlin at the time), who asked Jason to come interpret for Matlin. She quickly became comfortable with Jason, because he could express her thoughts so well it almost sounded, as if she was speaking for herself.

Jason’s biggest point of emphasis when conveying Matlin’s message was making it sound casual, yet professional, while reflecting some of Matlin’s personality. By working side by side with Matlin for over 20 years, Jack Jason became known as the one of the most famous interpreters in Hollywood.

A talented interpreter can play a very significant role in international relations and politics. Valentin Berezhkov served as the primary Soviet interpreter for Joseph Stalin and Vyacheslav Molotov during World War II conferences, where both Teddy Roosevelt and Winston Churchill were in attendance. Berezhkov played a critical role as the main interpreter at the Tehran Conference in 1943, which concluded with the Western Allies’ commitment to launch a second phase of large-scale combat operations against Nazi-Germany.

In 1945, Berezhkov served as the main interpreter for the Yalta Conference, which was focused on post-war peace and Europe’s post-war reorganization. Soon after the Yalta Conference, however, Berezhkov made a career change from interpreting to journalism. He later published a book in the 1990s about his experiences as an interpreter for Joseph Stalin, called “At Stalin’s Side”.

Thamsanga Jantjie’s performance at Nelson Mandela’s memorial will most likely be remembered as one of the most disgraceful interpretations of all time. Many viewers were both captivated and outraged by his performance, leading many sign language experts to question his interpreting skills and validity, due to his incorrect and repetitive hand motions. According to Marion Boers, executive director of the South African Translators’ Institute, “In South Africa, sign language interpreters are not legally required to get certified. In the entire country, only seven or eight interpreters are certified through SATI, and Jantjie is not one of them.”

After the immense backlash from the disappointed audience, both Jantjie and the South African government issued apologies for his inaccurate interpreting. This incident serves as a historical lesson that displays the importance of qualified and professional interpreters.

Alexander Burnes was an accomplished British interpreter, who later became one of the most influential spies of the British military in the early 1800’s. Born in Scotland, Burnes joined the East India Company Army at the age of 16, where he learned Hindi and Persian. His interpreting career started after he was appointed as a Hindustani interpreter to the first Extra Battalion at Surat. His proficiency in Persian also caught the attention of judges in the Sudder Adawlut (Supreme Court of Revenue in British India), who appointed him as the official translator of Persian documents. When Afghanistan was sought after by both the British and Russia in the 1830’s, the British government dispatched Burnes to gather Afghan intelligence. Traveling in disguise, Burnes surveyed the route through Kabul to Bukhara and produced the first detailed accounts of Afghani politics.

Gaspar Antonio Chi was a Yucatan Indian who was a very influential Spanish/Mayan interpreter in the late 1500s. With his understanding of the Spanish language, Chi became an interpreter to King Charles V of Spain. When King Charles was looking to collect information related the culture, geography, and history of the colonies, Chi used his knowledge of Spanish to assist the Mayan people. When responding to the questionnaires, Antonio was famously known for conveying his own personal opinions directly to the king, and informing him how things have changed for the worse since the arrival of the Spanish.

Many of Antonio’s responses to King Charles’ questionnaires are still preserved today as they provide valuable insight on post-colonial America. Gaspar Antonio Chi will be remembered for being the primary voice of the Mayan people.

Tisquantum is a historical interpreter who is known for his resilient story of escaping slavery and creating peace between the Pilgrims and Wampanoag Confederation. Tisquantum who was commonly referred to as “Squanto” was kidnapped by English traders to be sold as a slave in Spain. He was rescued by Spanish Friars who taught him Spanish and Christianity. After his rescue, he traveled to London where he became fluent in English. When Tisquantum returned back to America, he became a life-saving intermediary between the Pilgrims and the Wampanoag Confederation by establishing peace treaties and creating trading relationships.

Sam Harris is a professional interpreter who has become quite popular lately. Harris first captured national attention by serving as the sign language interpreter for Florida Governor Rick Scott; warning southern Florida residents to evacuate from Hurricane Irma. Harris’ highly animated and passionate style of interpreting quickly gained the attention and respect of many viewers. His notable performance earned him a guest appearance on Jimmy Kimmel.

While many who viewed his performance may question his exaggerated facial expressions, the severity of the situation called for it. Facial expressions and movement provide the context to what is being signed and in this case, the urgency for evacuations ahead of Hurricane Irma.

These amazing individuals worked side by side with world leaders, created peace between opposing cultures, and became television icons. Their influential work will serve as a perfect example of why professional interpreters are so important to our world’s future.

**At Bromberg, our team of qualified interpreters are ready to meet your needs. With over 200 languages offered, we are confident that we will be able to offer solutions to all of your language service needs. Contact us to find out how we can help.