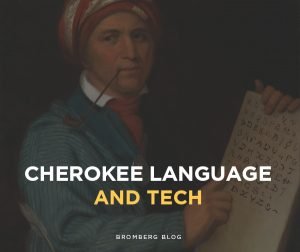 Cherokee language and tech: From Sequoyah to Apple, Microsoft and Google

The history of Cherokee language is the history of culture adapting to technology and changes. From the invention of the Cherokee Syllabary in 1821 until the digital era of the 2000s, when it became available in multiple digital information systems and platforms.

During the last decade Cherokee language has arrived to Apple’s iPhone and iPad, Microsoft Windows and Office, and in Google Fonts as well. The Cherokee Nation made substantial efforts for all these to happen, key factors for the survival of their language in the new millennium.

Nowadays Cherokee people can use computer systems, professional software and social media in their native language. Before that, thanks to the invention of the Cherokee Syllabary, vast written documentation and literature in Cherokee was already available.

Cherokee Syllabary was invented in 1821 by Sequoyah, a Cherokee blacksmith that dealt regularly with European businessmen. He is regarded as a brilliant person and a historical Cherokee figure, who was able not only to invent the written form of Cherokee but to also convince the chiefs of his community to adopt it as their own form of written communication.

Our Company has a history of working with indigenous people and translation and interpreting services, to improve access to public information and other services, like healthcare and education, in their languages. As part of our work in disseminating information about these topics, we will now look into the impressive capability of Cherokee language and culture to adopt new technologies.

Apple: The first IT giant to include Cherokee language on its devices

In 2010 Apple partnered with a Native American tribe to incorporate Cherokee language in new iPhone and iPad devices. This made available a powerful tool for Cherokee people keep their language and culture alive.

How did this happen? As reported by Apple, Cherokee tribal officials contacted the company back in 2007, when they expressed their interest in having Cherokee language available on iPhone mobiles.  As a result of hard work, multiple team discussions and development, iOS 4.1 incorporated Cherokee language in Apple devices in 2010.

Why were Cherokee people interested in Apple’s products? They considered it a way to encourage their children and young members to use their native language. According to Cherokee Chief Chad Smith:

“The goal is to spread the use of the language among tech-savvy children in the digital age.”

The initial request actually came from within Bill Gates’ company: back in 1990 Tracy Monteith, a Cherokee from North Carolina and Microsoft employee, asked to include Cherokee language in the core of the MS operating system. Even though it took quite some time to start working on the project, Monteith eventually started developing it in 2010.

To carry out the project a team of translators was assembled, which included tribal employees, Cherokee students and other members of the community. As a result, in 2012 Cherokee became the first Native American language to be fully integrated to the then new Windows 8 operating system.

But Cherokee people’s efforts with Microsoft did not stop there. It took a few more years, but it eventually happened: Microsoft Office 365 included Cherokee language in 2015. This allowed Cherokee speakers to use one of the most popular software suites in their native language.

Google’s approach to localizing its products started almost at the same time as Microsoft’s efforts. In 2012 also Google Search and Gmail made available Cherokee language on its services.

But one of the most important news about Cherokee language and Google came not so long ago, in 2020: the development of a Cherokee font variant in the popular and comprehensive Google Fonts Project.

With the availability of the Noto Sans Cherokee Font, Cherokee people have a new tool for communicating their news and content. Websites with the latest technologies can now implement Cherokee language localization, which means that they have more tools to connect with their own community and also reach new audiences, not only inside the US, but all over the world.

This is just the latest chapter of how Cherokee language has been developing over the last years. All this would not have been possible without Sequoyah’s Syllabary, Cherokee people’s will and efforts to preserve their culture and the collaboration of big technology developers.

Want to know more about languages and culture? Follow Bromberg’s language insights on Facebook and Instagram to get weekly updates. Also, if you need language assistance and services, feel free to contact us here.