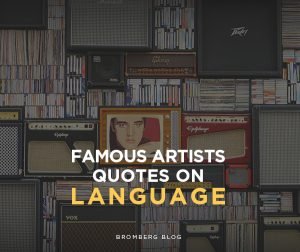 The world of art has been always passionate about languages as means of expression, exploration and knowledge. Famous artists from different fields, such as art, music, filmmaking and poetry have expressed the importance of languages and the connection of diverse cultures.

Bromberg & Associates works with professional linguists and designers for many projects, such as Multilingual Desktop Publishing, Transcreation and services for the Audio and Video industry. As we know, language services are not only a matter of written words; they are also about visual identity and well-crafted multilingual design solutions.

Here we list some of the most important quotes about language from notable artists:

“It is only possible to speak in the language and in the spirit of one’s time.”

French Romantic painter Eugene Delacroix was born on April 26, 1798, and died on August 13, 1863. His paintings are famous worldwide, with the Liberty Leading the People (nowadays found in the Louvre Museum in Paris) being one of his most iconic pieces of art.

Delacroix was well aware that his ideas and points of view were a product of the language and culture he grew up in. So, with the hope to find inspiration in diversity of other societies, he’s traveled to Spain, Morocco and expressed much interest in Orientalism. These experiences helped him to continue developing new ideas, which he eventually turned into his mural works.

“A different language is a different vision of life.”

Italian Filmmaker Federico Fellini was born on January 20, 1920 and died on October 31, 1993. Among his most acclaimed movies are La Dolce Vita, La Strada, Nights of Cabiria, and Juliet of the Spirits.

Fellini’s artistry is characterized by neorealism, with an aesthetic that evoked dreaming and nostalgia. He saw language and filmmaking as a way to build whole new realistic fictional stories, inviting the viewers to experience their own feelings in depth. For Fellini, not only the aesthetic of the film, but the way the characters speak and tell their story, was key in creating his iconic movies.

“In the language of an actor, to know is synonymous with to feel”

Russian theater director and theorist, Konstantin Sergeyevich Stanislavski, was born on January 5th, 1863 and died on August 7th, 1938. Certainly, one of the most influential names in the history of performing arts, as he developed his own “Stanislavski method”, which is widely acknowledged and practiced among actors and actresses in the cinema world, TV shows and famous theater plays.

As a theater theorist, Stanislavski’s main interest was to teach actors and actresses how to make actions and scenes look as real as possible. That is why his method relies primarily on training the performer on how to recreate feelings and expressions. According to Stanislavski, the actor or actress must experience a transition into the mindset and feelings he or she is trying to recreate.

American Stand-up comedian George Carlin was born on May 12, 1937 and passed away on June 22, 2008. He was very influential in the entertainment business, having inspired not only other performers such as Stephen Colbert and Ben Stiller, but a whole generation of musicians, actors and writers.

George Carlin certainly had a clever sense of humor and relied on language tricks to entertain his audience with insightful ideas. He was deeply fond of his profession, and he believed that his performances were meant not only to amuse his audience, but to challenge stereotypes and “common sense”.

Ani DiFranco
Song: Make Me Stay, Album: Not So Soft

American singer-songwriter Ani DiFranco was born on September 23, 1970. She is a supporter of the of LGBT rights and a political and cultural activist. Apart from that, she has released all her music independently, to retain creative freedom.

DiFranco uses her lyrics and music to channel her support for multicultural rights and to speak in favor of diversity. For her songwriting and lyrics, she usually focuses on the way we use language, as we speak and refer to each other. As part of her music and activism, she is interested in subjects on cultural awareness and social inclusion.

“The fact that for a long time Cubism has not been understood and that even today there are people who cannot see anything in it means nothing. I do not read English, an English book is a blank book to me. This does not mean that the English language does not exist. Why should I blame anyone but myself if I cannot understand what I know nothing about?”

Spanish painter and sculptor Pablo Picasso was born on October 25th, 1881 and passed away on April 8th, 1973. He is regarded as one of the most influential artists of his generation, having contributed to the development of cubism, collage and many other artistic styles. One of his most notable paintings is the famous Guernica, which can be found at Reina Sofía Museum, in Madrid, Spain.

Picasso developed abstract and surrealist painting styles during his lifespan. He was interested in figurative images, dreams and anything his rational intellect could not comprehend straight away. That is why he believed that being exposed to different languages and cultures was a way to face something he could not understand completely, and therefore, would help him develop new ideas.

“I still believe in the power of the word, that words inspire.”

Canadian singer and songwriter legend Roberta Joan “Joni” Mitchell was born on November 7, 1943. She rose to popularity in the late sixties as a folk icon, with her intimate lyrics, exceptional writing skills and later experimental approach.

Joni Mitchell is nowadays one of the most influential and inspiring artists of modern music, having influenced notable acts, such as Pink Floyd, Taylor Swift and Madonna, among many others. She believes that words are a really important part of her music, as a way to speak about human nature and connect with the audience.

“Translation is the circulatory system of the world’s literature.”

American filmmaker, teacher and social critic, Susan Sontag was born on January 16th, 1933 and died on December 28th, 2004. She was an avid intellectual activist, being especially critical of the Vietnam War and the Siege of Sarajevo, where she even travelled to the areas of conflict.

One of her most notable works is the book Against Interpretation, in which she argues that art criticism forces art pieces to fit into preconceived intellectual models, and therefore, reduce their social impact and innovation. Sontag was interested in connecting with artists and works that were not part of the mainstream. She was profoundly interested in other cultures and languages, viewing them as the door to different worlds and forms of art.

In Bromberg & Associates we have vast experience in multilingual design, having worked in many projects involving Multilingual Desktop Publishing, Graphic Design, Audio and Video language services and transcreation. If you are looking to take your design project to the next level, be sure to reach out to us.