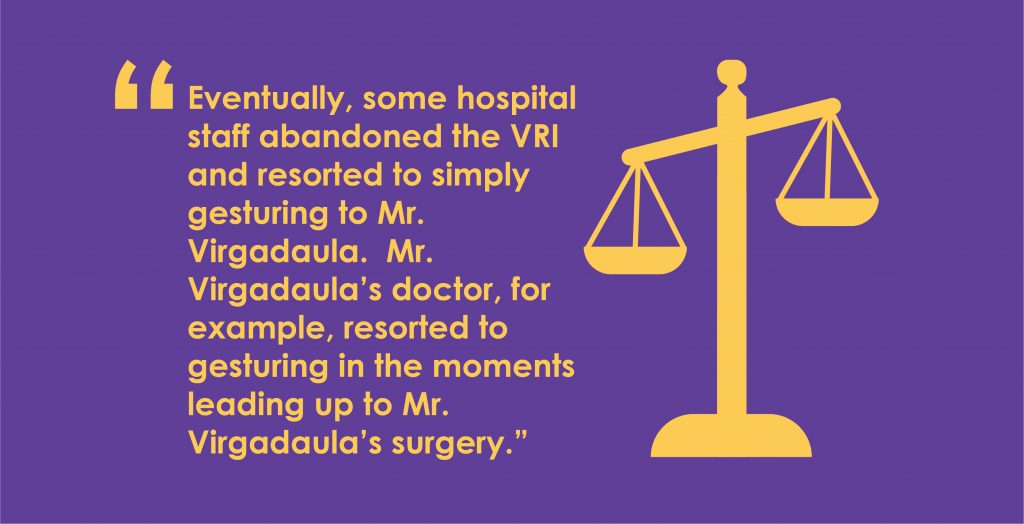 In late April 2017, a federal court announced a major decision that has implications for health care providers nationwide.

The U.S. Court of Appeals for the Eleventh Circuit ruled that several Deaf patients could recover disability discrimination money damages against their hospital because of the hospital’s improper use of Video Remote Interpreting (VRI) to communicate with its patients.

The Eleventh Circuit, whose decisions are legally binding in Alabama, Georgia, and Florida, provided important legal standards for when a health care provider’s use of Video Remote Interpreting to communicate with Deaf patients can lead to liability under two federal laws, the Rehabilitation Act of 1973 and the Americans with Disabilities Act.

Federal appeals court decisions are given great deference and attention by courts across the country, beyond the area where the decisions are legally binding. This decision will affect and influence courts and health care providers in all states.

The Court outlined the experiences of the Deaf patients who sued the hospital. Here is the Court’s description of three patients’ VRI experiences:

Mr. Liese requested an in-person interpreter, but his nurses opted to use the VRI.  The nurses, however, used the VRI only intermittently, and when they did use the VRI, it frequently malfunctioned.  The VRI worked at times but was often blurry or failed to activate.  Also, Mr. Liese has macular degeneration, so he could not see the VRI screen clearly, and on at least one occasion, he and Mrs. Liese were unable to comprehend the remotely located interpreter’s signing…

Citing the examples of these and other patients, the Eleventh Circuit ruled that:

“A jury could find that [five Deaf patients] were denied effective communication; that nurses were aware of the denials; and that the nurses refused to correct the denials… The evidence indicates that the nurses, knowing the patients required an interpretive aid, relied on the VRI to facilitate communication with the patients; were put on notice that the VRI was not accommodating the patients; and chose to persist in using the VRI without correcting its deficiencies…  In fact, it appears that the nurses even abandoned the VRI altogether at times without providing an alternative interpretive aid.”

“[The hospital’s] VRI policy provides hospital staff no guidance on when the VRI or another accommodation is appropriate.  Nurses are afforded “complete discretion” in implementing the policy….the record supports a finding that nurses’ decisions about when to provide and when to abandon the VRI are generally not “subject to reversal…”

Unless this lawsuit is settled by the patients and the hospital, the case will move forward and will be set for trial and other hearings to assess the amount of money damages owed for disability discrimination.

Two additional takeaways from this case are important.

This decision is one of the most significant concerning VRI and effective communications with Deaf and hard of hearing people. Americans with Disabilities Act cases continue to be hotly and widely litigated throughout the United States. More court actions like this one will undoubtedly unfold resulting in additional ADA legal requirements for organizations to follow.