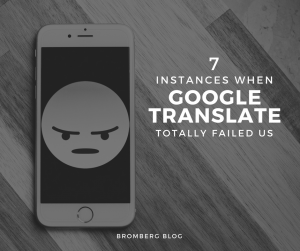 Google Translate used to be the go-to for cunning middle school kids who had a Spanish essay due the next morning (or was that just me?) But, having greatly improved its accuracy since the Artificial Intelligence update in 2017, Google Translate is now being used around the world to translate over 100 languages with its camera, text and ever-popular voice functions.

In fact, “The defining image of this World Cup is fans from all over the planet, hosts and visitors alike, holding their cellphones out to each other to conduct conversations in languages they have never learned and would never claim to speak,” according to the New York Times.

In July 2018, top newspaper Business Insider published a story on China’s response to Trump’s tariffs. But much of the story had readers scratching their heads because the Chinese statements were directly translated and they were quite off to say in the least. For example, one direct translation in the story read:

The Chinese side promised not to fight the first shot, but in order to defend the core interests of the country and the interests of the people, they had to be forced to make the necessary counterattacks,’ the Commerce Ministry said.

While the translation isn’t completely devoid of its original meaning (or at least it seems), there’s still some peculiar word choice, such as the mistranslated, “fight the first shot,” instead of the correct phrase, “fire the first shot.” And why is the Chinese government referring to themselves as ‘they?’

I suppose machine translation mistakes like this are just a penny a dozen.

The 2018 World Cup should be giving out trophies for Google Translate fails because some of the errors reported on by Sputnik news are golden. Poor Jane Holland, from Wiltshire, UK, just wanted to compliment her host family on their nice car. But instead of saying, “You have a really nice car,” Google Translate decided on something a little more … R-rated.

Another World Cup fan, Michael Holden, from Bristol, UK, just wanted an morning croissant, but instead he ended up asking for a camel ride.

In another translation mistake reported by Sputnik at the World Cup, a man named Samuel Joans needed a tetanus shot after being bitten by a dog. Using Google Translate to communicate, he and his nurse traded information. After Joans told the nurse his dog-bite story, the nurse used Google Translate to follow up with a question that was translated to, “What kind of pizza did you have for dinner? Eventually Joans was taken care of, but it just goes to show that Google Translate’s errors could end up being more dangerous than funny in medical situations.

Google Translate, in Aug. 2009, didn’t seek the help of real Welsh speakers when it used pre-existing online Welsh translations to build a machine translation service. A BBC article even called the translations, “scummy.” Even worse, these mangled translations found their way onto public signage and documents for all to see. One sign, reading, “Blasting in Progress,” was translated to “Workers Exploding.” The translations were so bad that a Flickr group was created solely for users to share other horribly mistranslated photo examples.

In a more serious example, a homecare nurse in Wales was under fire after she used Google Translate to assess her patients’ needs. In an article from 2017, Wales Online reported that the nurse had a poor grasp of both English and Welsh and she ultimately decided to use the translation service often to communicate. As a result of this, some of her patients did not receive the proper care they required. Many of the patients were dehydrated due to miscommunications, while others went without pain relief for their conditions.

4. Russia Became the City of Mordor, and More

Can you imagine trying to translate the word “Russia,” in Google Translate, and ending up with the name of a fictional dystopian city which was first mentioned in the Lord of the Rings? That’s right, in 2016, Russia became “Mordor,” — at least, according to Google Translate.

Other Russian translation mistakes were reported in a Fortune article, such as “Russians” being translated as “occupiers,” and Russia’s top diplomat being renamed as a “sad little horse.” But while this error might sound like some sort of political statement on Google’s behalf, the mistakes were simply due to a bug that has since been fixed.

5. Norwegian Olympics Team Orders a Few Too Many Eggs

The Norwegian Olympics team in the 2018 Winter Olympics Games in South Korea made an egg-straordinary mistake when they used Google Translate to order 1,500 eggs from a local grocery store for their team. But after a truck came arrived with 15,000 eggs, the team knew something had been lost in translation!

“According to the head of the Norwegian team, the translation had added an extra zero As a BBC report pointed out, the issue might have something to do with the Korean counting system, in which large numbers are based on units of 10,000 instead of thousands,” reported Atlas Obscura.

Thankfully, the local store allowed the team to return much of the eggs. Even still, the team was left with a large supply of eggs, many of which they used to create scrambles, omelets, and egg bread for the athletes and other Olympic officials. In an odd sort of way, I suppose this situation ended sunny-side-up 🙂

Doomsday clock is three minutes at twelve We are experiencing characters and a dramatic development in the world, which indicate that we are increasingly approaching the end times and Jesus’ return.

You might be tempted to say that this example is simply a coincidence, but other people have had similar results with different translations. So much so, in fact, that there’s an
entire Reddit thread with over 2,000 subscribers contributing to the archiving of this phenomenon: Translate Gate.

7. Jimmy Fallon Features Musical Google Translation Fails
It wasn’t long until the internet found out that if you translate English to Croatian and back to English again, you’ll get some tickling results. With this in mind, the Tonight Show host, Jimmy Fallon, decided to take it one step further by creating a segment where celebrity guests sing popular songs but with lyrics that were translated from one language into another and back again to the source language. Placing these songs into this translation blender oftentimes yield some pretty hilarious outcomes!

In 2017, one popular segment featured Miley Cyrus singing Google Translate’s rendition of Ed Sheeran’s, “Shape of You,” which had a chorus that translated hilariously to, “I like that cadaver.”

Google Translate may not have hit the mark for accurate machine translation, but it did inspire a pretty hysterical Tonight Show segment!

Bonus — Google Translate Win
At an interview with soccer player Antoine Griezmann, who was playing for Madrid but rumored to be transferring clubs, reporters weren’t allowed to ask Griezmann any questions in any language but French, according to SB Nation. Little reasoning behind this decision was given, but it’s widely speculated that this tactic was a way to dodge questions about his possible transfer at the conference.

Throughout the conference, no questions about his transfer were asked … that is, until a resourceful Spanish reporter, Pedro Morata from the radio network Cadena SER, had an idea — Google Translate.

When it was the reporter’s turn to ask a question, he (with a smirk, of course) simply used Google Translate and held his phone up to the microphone to ask the question in French. Griezmann thought this was a clever tactic and gave the reporter a laugh, but Griezmann’s representative didn’t think so. Although the soccer player still didn’t answer Morata’s question, it was definitely a win for Google Translate because it showed off the app’s real-world usability for general conversation with others.

This is why language services with qualified translators and interpreters, like the ones provided by Bromberg & Associates, are so vital in today’s world. Perhaps if you are looking to predict the future with some odd prophesies, or if you’re trying to make a hilarious music segment on your hit TV show, then in this case Google Translate is perfect!

However, if your language service needs are more significant, such as for personal document translation, medical interpretation, or perhaps for business conference interpreting, you ought to contact the professional language solutions experts at Bromberg & Associates for some assistance.