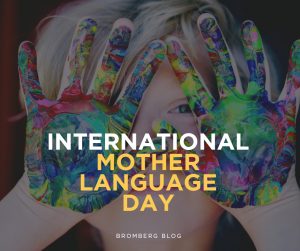 International Mother Language Day: For the Preservation and Revitalization of All Languages

No matter how many languages a person speaks, their mother tongue is always the most important. Mother languages hold the soundtracks to childhood, allow ancestral wisdom and knowledge to pass from generation to generation, and help speakers feel more connected to their elders and families. These aspects of speaking a mother tongue are invaluable and yet in danger in a world where numerous countries are still working to recuperate and recover from the effects of colonization. Today, there are an estimated 6,000-7,00 languages spoken around the world today, and 43% of them are in danger of extinction according to the UNESCO Atlas of Languages in Danger. International Mother Language Day serves to remind cultures and communities all over the world of the importance of preserving and passing down mother language abilities in the face of extinction.

What is International Mother Language Day?

International Mother Language Day is a holiday dedicated to linguistic and cultural diversity, with the goal of honoring mother languages from around the globe. The holiday was declared by the General Conference of the United Nations Educational, Scientific and Cultural Organization (UNESCO) in November of 1999. Later, in 2002, the General Assembly of the UN officially marked the day with a resolution “to promote the preservation and protection of all languages used by peoples of the world.”

Why is International Mother Language Day celebrated on February 21?

After the partition of India in 1947, the newly-formed Pakistani state was working to organize a new government. However, that new government wanted to establish Urdu as the official state language. As time passed, both media and education became exclusively offered in Urdu while Bengali, the mother language of millions of people in the eastern part of the state, was removed from schools, currency, and mailing stamps. From this oppression arose a Bengali language movement spearheaded by students at the University of Dhaka. Over the years, these students organized around the preservation of Bengali, mobilizing heritage Bengali speakers to take pride in their language and the culture intrinsically connected to it.

This struggle came to a head on February 21, 1952, when students, professors, and Bengali speakers from the community gathered together in a peaceful demonstration. At this point in time, the state had not only removed Bengali from media and government, but they had also prohibited the use and instruction of the language in schools and universities. Activists came out to demand the right to use their mother language, but Pakistani police quickly suppressed the movement with violence. Students and community members alike were murdered by the police, which sparked outrage and an even larger language movement in the region. This movement eventually led to the formation of Bangladesh in 1971.

Every year on February 21, Bangladesh honors those who died during the protest with the “Sahid Dibash,” or “Day of Martyrs.” These martyrs are believed to have sacrificed themselves for the rights of the Bengali people to use their mother tongue. Over 45 years after the protest, Bangladesh invited the world to celebrate mother languages together with them on February 21st by bringing an initiative for the holiday to the UNESCO General Conference of 1999. Since then, the UN has used the story of Bengali speakers fighting for the right to speak their language to promote multilingualism and respect for all languages.

Each year, the UN employs International Mother Language Day as an opportunity to uplift heritage speakers of Indigenous languages, encouraging pride and honor among speakers. This year, the theme of the holiday was “Fostering multilingualism for inclusion in education and society.” Audrey Azoulay, Director-General of UNESCO, explained that this theme “encourages us to support multilingualism and the use of mother tongues, both at school and in everyday life.” She went on to explain:

“This is essential, because when 40% of the world’s inhabitants do not have access to education in the language they speak or understand best, it hinders their learning, as well as their access to heritage and cultural expressions. This year, special attention is being paid to multilingual education from early childhood, so that for children, their mother tongue is always an asset.”

Education is the focal point of this International Mother Language Day as the UN works to innovate ways to make education accessible in all languages. Children are disadvantaged when they don´t have access to education in a language they understand. Cognitive and intellectual development is faster when one has a good command of their mother tongue, and educational success is thus higher when students are taught in their mother languages. This educational success also impacts self-esteem, both inside and outside of the classroom. When children can communicate effectively with their teachers and peers, they overcome challenges and are empowered to excel both inside and outside the classroom.

Research also demonstrates that proficiency in one’s mother language empowers children to not only reason better and think on their feet, but also helps them learn other languages. When a child develops strong reading and writing skills in their mother tongue, they can apply those skills to other language learning endeavors. However, when not given ample opportunity to develop their mother language skills before being forced to learn or speak another, they can struggle with pronunciation, grammar, and general ability to express themselves. This can lead to feelings of frustration and confusion when trying to communicate in any language⁠—but these negative emotions are ameliorated by mother language access resources.

Mother Languages and the Future

Mother languages are not solely important because of education and the ways that language access tools allow all people to participate in society. Around the world, linguistic oppression has been a tool of control and marginalization for centuries. Linguistic liberation is at the center of addressing questions around climate change, sustainable development, and cultural diversity. Empowering people to use their mother languages enables them to access ancestral wisdom and ways of thinking about the earth and the economy. As humanity works to reconcile and reverse the destruction our industrial activities have caused, a revitalization of mother language use will lead to sustainable innovation for a culturally diverse and environmentally conscious future.

Ultimately, preserving our mother languages is important because they ensure a culturally and linguistically diverse future in a society where inclusivity is prioritized and the environment is protected. Cultural hegemony has wreaked havoc on Indigenous and marginalized populations around the world, and education and society should not amplify this issue by exclusively offering services in widely-spoken languages. Secretary-General of the Ghana Commission for UNESCO Ama Serwah Nerquay-Tetteh summarized this well on the occasion of this past International Mother Language Day by saying, “Who we are, is embodied in the language we speak and we must always remember that the day the last person who speaks our language dies, our traditions and entire cultural heritage dies with him.”

When reflecting on International Mother Language Day this year, let us all remember the important role our mother languages play in shaping identity and cultural pride while focusing on manifesting a society where no one is disadvantaged because of the language their family and community speaks.